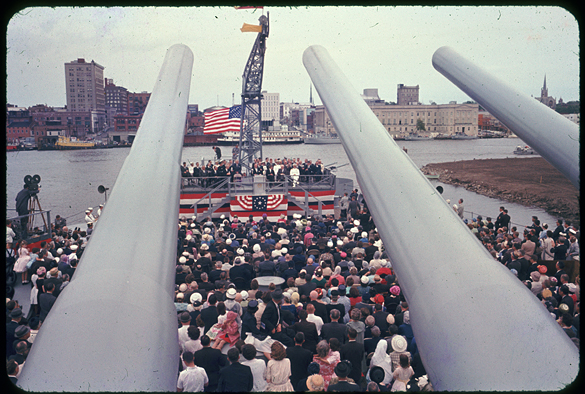 The above headline in the Greensboro Record on Monday afternoon, April 30, 1962 recalled a remark by Admiral Arleigh A. Burke’s the previous day.  Fifty years later, A View to Hugh contributor Jack Hilliard takes a look back at the upcoming anniversary this Sunday of the dedication of the Battleship USS North Carolina.  For a prequel, you might want to read Jack’s post from last October, “A North Carolina homecoming.”


Twenty one years and twenty days after its commissioning on April 9, 1941, the Battleship USS North Carolina was dedicated as a memorial to the 8,910 North Carolinians of all services killed in World War II.  Admiral Arleigh A. Burke, retired Chief of Naval Operations, was the principal speaker on April 29, 1962 at the dedication ceremony of the majestically moored battleship on the Cape Fear River near downtown Wilmington.

As she lies quietly here at Wilmington she is just as gallant as she was in the days when her big guns were firing.  She is gallant today because she stands silently to remind all who see her of our precious heritage, reminding us with her battle record and with the battle records of those to whom she is dedicated.

Guadalcanal, the Solomons, Saipan, Luzon, Iwo Jima, Okinawa . . . an eternal monument to brave men and a source of inspiration to all Americans.

The retired admiral expressed the hope that visitors to the ship in the years to come will “remember not only those who died—but why they died. And from this memory let us all strengthen our resolve to protect and preserve the blessings of freedom whatever the cost may be.” 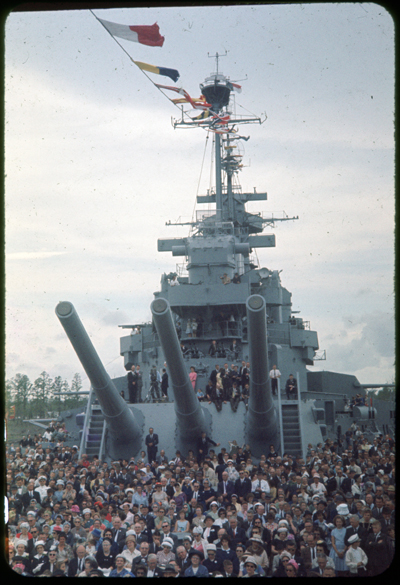 More than 2,000 people on the stern of the ship and thousands more in the nearby parking areas took part in the emotional ceremony . . . just as they had contributed money to the “Save-Our-Battleship” effort.  During the ceremony, the USS North Carolina Battleship Commission, headed by Chairman Hugh Morton and Vice Chairman Orville Campbell, drew praise for their tireless efforts to save the ship.
North Carolina Governor Terry Sanford, introduced by Master of Ceremonies Jim Reid of radio station WPTF in Raleigh, called the ship “North Carolina’s historic link with World War II . . . a great memorial to a fighting people.” He then reminded the audience that $315,000 had been raised to date, and more than 112,000 people had visited the ship since it’s opening on October 14, 1961. 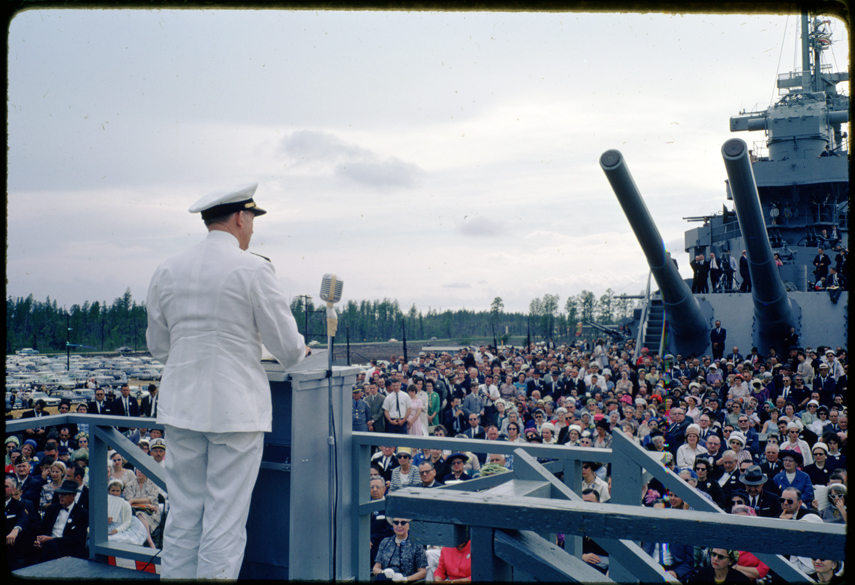 Her hull and her weapons may represent, in a way, a bygone era in the story of naval power and naval tactics, but her spirit remains modern and she will thereby continue to contribute in a great measure to the security of the United States and the moral fiber of her citizenry. 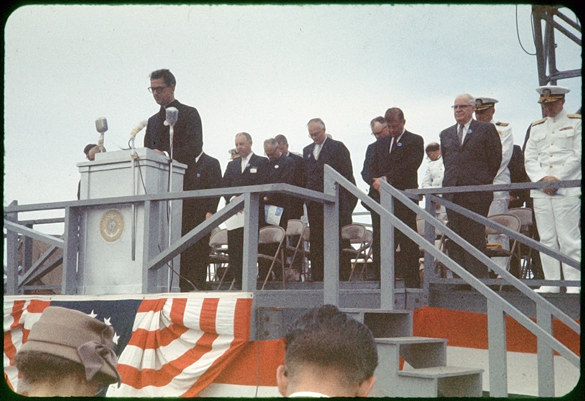 Ministers of three faiths also took part in the ceremony.  The Rt. Rev. Thomas H. Wright, Bishop of the Episcopal Diocese of East Carolina delivered the invocation; the dedicatory prayer was by Rev. Charles J. O’Connor, pastor of St. Mary’s Roman Catholic Church, Wilmington, and Rabbi Samuel A. Friedman of the Congregation of B’nai Israel, Wilmington, gave the benediction.  Commerce Secretary Luther H. Hodges, who as Governor was instrumental in acting on Jimmy Craig’s idea to save the ship, set out new marching orders for the old battlewagon:

We’re launching this great battleship on a second tour of duty . . . as a permanent reminder of freedom’s obligations.

Navy minesweepers plied the Cape Fear, ferrying guests from downtown Wilmington to the battleship site and later passed in review just before Army, Navy, and Air Force planes flew over in a magnificent aerial salute.
The radio broadcast of the ceremonies was offered to each radio station in North Carolina and adjoining states.  Wilmington television station WECT carried the proceedings live to coastal North Carolina.  Video tape replays were available to other TV stations.

North Carolina, the first of the new battleships of World War II, has special significance to the Navy and the Nation.  Her brilliant performance in gunnery in the Pacific with the fast carrier task force played an important role in our ultimate victory.  She well deserved to be enshrined.

Hugh Morton, in his 1988 book, Making a Difference in North Carolina, dedicated an entire chapter to the ship.  Said Morton:

The (USS) North Carolina’s record speaks for itself.  She was in all 12 offensive naval engagements.  Applying any plausible yardstick one cares to use, the USS North Carolina may well be the greatest battleship ever floated by the United States.  We who hail from North Carolina were in luck the day it was decided to name this particular ship for our state.

On January 14, 1986, the ship was declared a National Historic Landmark by the National Park Service.  So, on this the fiftieth anniversary of the dedication of the Battleship USS North Carolina (BB-55), I choose to believe there will be another gathering in a very special place.  Included will be, Burke and Ricketts, Sanford and Hodges, Morton and Campbell, Eller and Craig.  And as they did 50 years ago, leading this gathering will be Jim Reid along with Rt. Rev Wright, Rev O’Connor, and Rabbi Friedman.  All will be joined by 8,910 North Carolina heroes from World War II.