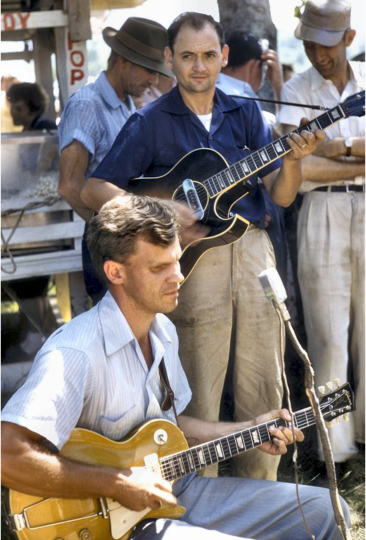 Hugh Morton’s photograph above of Doc Watson, seated, and Jack Williams in 1953 appears in his book Hugh Morton’s North Carolina with a caption stating that Watson and Williams “were members of a band that played for small dances and family gatherings . . .”  That caption is all we know about this photograph.  Morton made this photograph very early in Watson’s career—the year Watson and Williams first met, eleven years before Watson’s first recording.
The original 35mm slide or a color negative has not turned up in processing the Morton collection.  There is, however, an inkjet print and the low resolution digital file within a PowerPoint presentation shown here, in the unprocessed files of non-original items.  Morton’s portrait of Watson playing a guitar in front of a woodpile, published in Making a Difference in North Carolina, has also not surfaced.  To date, fifteen photographs of Doc Watson can bee seen in the online collection.