The previous post on A View to Hugh features a Hugh Morton photograph of Grandfather Mountain, published without credit on the cover of the 8 March 1941 issue of The State.  As the blog post revealed, I suspect the photograph dates from 1940 or earlier, which is relatively early in Morton’s career as a photographer.  January of that year saw Morton beginning his second semester as a freshman at UNC.  His camera had been stolen shortly after arriving on campus in the autumn of 1939, and it was not until sometime around January or February 1940 that he bought his next camera.  So, I wondered, “How early in his career would that have been?”  Today’s exploration unravels an uncertainty and mystery that I didn’t even have until two days ago. 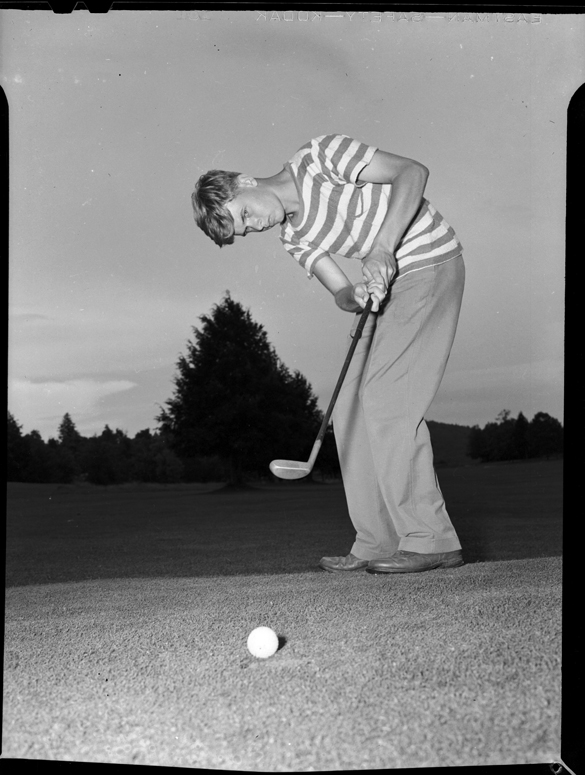 This is an important photograph in Morton’s career.  At the time he made it, Morton was a UNC student with a summertime job as the photography counselor at Camp Yonahnoka.  Here’s one of his accounts about the photograph, quoted from the preface of his 2003 book Hugh Morton’s North Carolina:

In 1940, at nearby Linville, a fourteen-year-old kid from Tarboro named Harvie Ward embarrassed a lot of adults by winning the prestigious Linville Men’s Golf Tournament.  Burke Davis, sports editor of the Charlotte News, contacted the Linville Club for a photograph of Harvie Ward, and I was called to come up from camp to carry out what was my first photo assignment for a daily newspaper.  Davis liked my Harvie Ward pictures, and this led to many photo assignments for the Charlotte News during my college years at the University of North Carolina at Chapel Hill.

Because this assignment helped launch Hugh Morton’s career as a news photographer, and the early view of Grandfather Mountain was also likely made in 1940, I wanted to know when the Charlotte News published the Ward photograph(s) (two negatives are extant in the Morton collection) relative to publication of the early Grandfather Mountain view in The State.  I searched the Web for information on the Linville golf tournament and Harvie Ward for 1940, but only found a few bits and pieces—and nothing that said when they played the tournament.  So . . . off to the microfilm room.
I scanned through issues of the Charlotte News, Tarboro’s Daily Southerner, and Rocky Mount’s Evening Telegram published during the “golf-able” summer months through mid September, by which time Morton would have returned to Chapel Hill from Camp Yonahnoka and Ward would have already returned to Tarboro in time for their classes.  Nothing . . . at least not that mentioned Harvie Ward winning the tournament in 1940.
I turned next to Morton’s booklet, Sixty Years with a Camera published in 1996, which I recalled also included the portrait of Ward.  As The Jetsons cartoon dog Astro would say, “Ruh Roh . . . .”

The first picture I took on assignment for a newspaper (the Charlotte News) was of Harvie Ward when he won the 1941 Linville Men’s Golf Tournament.  This was a very competitive event, and it was a surprise to everybody that a 15-year-old kid from Tarboro would win it.

Two different statements of fact.  What to do?  Well, I turned to a different newspaper, the Charlotte Observer and here’s what I found: Harvie Ward didn’t win the Linville Men’s Invitational Tournament in 1939, 1940, 1941, nor 1942.  (I didn’t go further, because Morton was in the army in 1943).  A detailed listing of the entrants in the Charlotte Observer revealed that Ward didn’t enter the 1940 tournament; he did, however, defeat Ed Gravell of Roaring Gap to win the “second flight” of the 1941 tournament.  I also found a congratulatory paragraph in the Daily Southerner on August 4, 1941 “for taking first place in second flight in Linville invitational golf tournament.  Harvie is having great time knocking off the little fellows.”  [For golf historians, Sam Perry emerged victorious in 1939, Charles Dudley won the championship flight in 1940, Hub Covington won the 1941 tournament, and Billy Ireland won the event in 1942.]
To be thorough, I searched for both years (1940 and 1941) through mid September.   There are no photographs of Ward in the Charlotte News.  I now even wonder if the newspaper ever published one of these portraits of Ward by Morton.
So in all likelihood, Hugh Morton had it right the first time in the 1996 booklet: the Harvie Ward, Jr. photographs probably date from 1941.  And here’s some supporting evidence: photographs began appearing in the Charlotte News sports section’s “Pigskin Review” articles with the credit line “News Photos by Hugh Morton” in mid September 1941, which is in agreement with Morton’s statement that the Ward pictures “led to many assignments.”  Morton photographed members of the 1941 football teams of UNC (published September 12th), Duke, (September 13th), NC State (September 15th), and Wake Forest (September 24th), plus two photographs made during and after UNC’s season opener on September 20th against Lenor-Rhyne that featured UNC’s standout running back Hugh Cox.  By comparison, there are no photographs in the newspaper credited to Morton in late summer or early autumn of 1940.
My conclusion? So far, the earliest Morton photograph that I’ve discovered to be published in a non-UNC publication is the early view of Grandfather Mountain.  Now, please tell me why I believe the story probably doesn’t end there?!