On Saturday, November 24th the football teams for the University of North Carolina and the University of Maryland will meet for the 70th time.  In light of Maryland’s recent decision to leave the Athletic Coast Conference, however, the two will meet far fewer times in the future.   Of the sixty-nine previous games, thirty-four of them have been played away from Chapel Hill and one of those games stands out from all the others.  It made front-page news as well as sports-page news and is often called “The Queen Game.”  Morton collection volunteer Jack Hilliard takes a look back at that special Carolina–Maryland game. 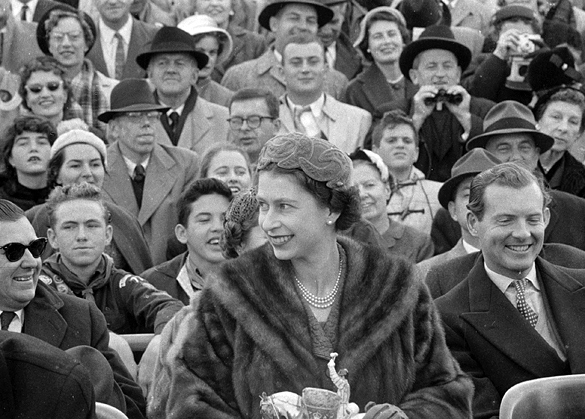 On September 30th, 1957, Buckingham Palace released the itinerary for Queen Elizabeth’s visit to Canada and the United States.  The visit was to include military and diplomatic ceremonies; luncheons, receptions, and dinners; a visit to an art gallery; religious services; and at the queen’s special request, a college football game.  The United States State Department selected the game between the University of Maryland, coached by Tommy Mont, and the University of North Carolina, coached by Jim Tatum.

During the time between this official announcement and the queen’s arrival in Canada on October 12th, an event of epic proportions took place: the Soviet Union launched an artificial earth satellite on October 4th, 1957.  The satellite would become known as Sputnik I, and the space race was on.  The queen’s visit temporarily took a backseat.
Nonetheless, on October 12th Queen Elizabeth II and Prince Philip’s four-engine DC7C landed at Uplands Air Base in Ottawa at 4:21 PM (EDT), four minutes ahead of schedule on its thirteen and a-half-hour flight from London.  As the doors opened at 4:30 (the scheduled time), a Royal Canadian Air Force band played “God Save the Queen.”  As the 31-year-old queen stepped from the plane, a tremendous cheer went up from the 30,000 gathered for her arrival.  Canada’s Governor General Vincent Massey and Prime Minister and Mrs. John Diefenbaker offered the official welcome.
After four days in Canada, it was off to the United States with a stop at the Jamestown Festival, held near Williamsburg, Virginia to celebrate the 350th anniversary of the founding of the first permanent English colony in America.  The next stop was Washington, D.C. with President and Mrs. Eisenhower welcoming the royal party.
Saturday, October 19, 1957, was a blustery, chilly 54-degree day.  Queen Elizabeth attended a 9:40 AM special reception at the British Embassy, then lunched with President and Mrs. Eisenhower.  Following lunch, it was game time and the queen and prince boarded one of President Eisenhower’s bubble-top Lincolns for the 10-mile, 45-minute ride to Byrd Stadium in College Park, Maryland.
It would be a football event like no other.  Fourteenth-ranked North Carolina would be a two-touchdown favorite, and the game would mark UNC head coach Jim Tatum’s return to the home stadium where he coached for nine years and led Maryland to a national championship in 1953.
There were reports that the game would be televised under the NCAA’s sellout rule, but ACC Commissioner Jim Weaver noted that Maryland had already made its two TV appearances for the year, so the folks back in North Carolina would only get a radio broadcast.
43,000 fans packed Byrd Stadium along with 480 accredited news personnel—which included Hugh Morton, and Life magazine’s Alfred Eisenstaedt, Hank Walker, and Edward Clark.  Also there were Jimmy Jeffries of the Greensboro Record and Don Sturkey of the Charlotte Observer.  Morton made several photographs during the festivities.  At one point during the excitement, Morton turned his camera on the other photographers.


With 300 security personnel (Scotland Yard and FBI included) in place, at 2:10 PM, 20 motorcycles appeared at the field house end of the stadium followed by the queen and Prince Philip.  The royal party took a lap around the stadium and then took seats in a special box at the 50-yard line on the Carolina side of the field.  Already in place were University of Maryland President Dr. and Mrs. Wilson Elkins, Maryland governor Theodore R. McKeldin and wife Dorothy, British secretary Selwyn Lloyd, UNC president William C. Friday, and North Carolina governor Luther H. Hodges, who was on his way back home from a week of industry seeking in New York.  Mrs. Hodges and son, Luther, Junior had flown up from North Carolina that morning. [Editor’s note: there is some photographic evidence to suggest that Morton may have been part of the governor’s trip to New York City.  We are investigating!]
When the queen and her party were seated, the 420-member University of Maryland band took the field and put on quite a show along with the Maryland card section, which formed the letters “ER.”
Then, it was time for the teams’ co-captains to be introduced: Maryland’s Gene Alderton and Jack Healy, and Carolina’s Buddy Payne and Dave Reed.  Each team presented the queen a special gift—Maryland gave her a game ball and UNC gave her the special coin used to start the game.  Governor Hodges presented her with a miniature statue of Sir Walter Raleigh. 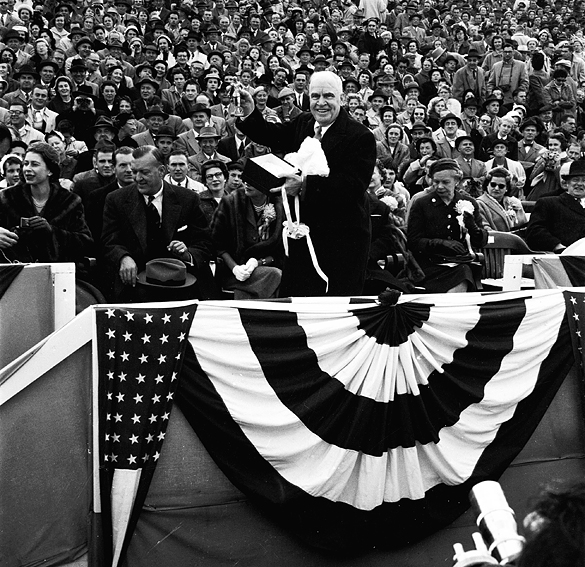 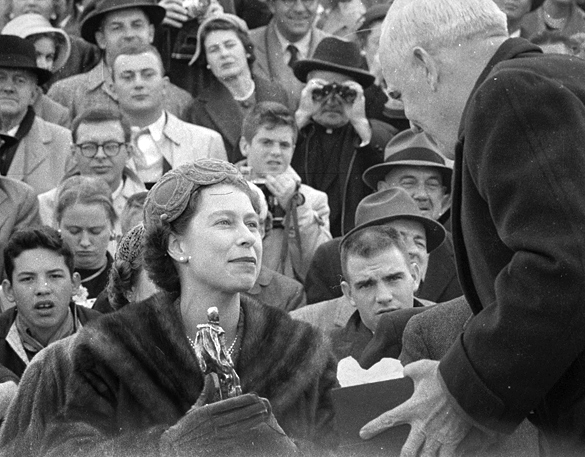 Then it was time for the game.  As the teams lined up for the kickoff, the queen turned to Governor McKeldin and asked, “How many men on a team?”

“Eleven on each side,” he replied.
Late in the first quarter, Tar Heel halfback Daley Goff rushed 11 yards for a touchdown, much to the delight of the estimated 5,000 Tar Heels on hand.  The touchdown set off a celebration that concluded with the Carolina band playing “Dixie,” which brought Governor Hodges to his feet. The 7-0 score remained through the second quarter.
The Carolina band performed at halftime and proclaimed the “North Carolina Parade of Industries,” followed by another rendition of “Dixie.”  The queen joined in the applause, as the sun broke through the clouds. The Maryland card section formed the Union Jack.
At the 4:11 mark of the third quarter, Maryland quarterback Bob Rusevlyan scored on a one-yard sneak tying the score at 7-7.  Then in the fourth quarter, Maryland took the lead on an 81-yard touchdown run by halfback Ted Kershner.  The hometown crowd went wild . . . the Queen managed a smile.  Soon after, Maryland fullback Jim Joyce put the game away with a 13-yard touchdown run making the final score 21 to 7.
Following the game, Coach Mont was congratulated by Coach Tatum at midfield, then got a shoulder ride from his team up to the royal box.  The queen extended her hand and said, “Wonderful, just wonderful.”  Prince Philip added, “Very wonderful.”  Said Coach Mont, “Listen, I’ll revel in this one the rest of my life.”
And a long, long way from all the royal excitement, at the far end of the stadium, North Carolina Head Coach Jim Tatum began the long, slow walk to the locker room, his hands in his pockets, his head bowed.  He never got to meet the Queen.  The headline in the High Point Enterprise on October 20th read: “We Blew It,” Says ‘Not-So-Sunny’ Jim.  Less than two years, on July 23, 1959, Jim Tatum died tragically at the age of 46.  With his death, the hopes of UNC’s big-time football died also.
On Sunday, October 20, 1957, the queen and Prince Philip attended religious services at Washington’s National Cathedral, and on Monday the 21st they arrived in New York by train for a visit to the United Nations and to lunch with New York City mayor Robert Wagner.  On October 22nd, Queen Elizabeth concluded her first trip to the United States as queen and the royal party flew back to London.