It’s that time of year again . .  tie buying season!  (I bought one myself this weekend, a holiday gift for myself.)  Maybe Father’s Day is the only other time of year when men’s ties sell more?  Perhaps a knowledgeable reader can fill in the statistics.
In 1952 a certain style necktie made its way into the wardrobes of North Carolina males: “The Original Tar Heel Tie.”  Is the necktie now celebrating its 60th anniversary? (A celebration, that is, if anyone even remembers this tie!)  Time prevents me from jumping too deeply into the topic, so perhaps our fellow readers can fill in some details and we can collectively revive this knot-worthy event.

Hugh Morton’s portrait of a smiling E. L. White appears with other photographs by different photographers in a short two-column spread in the December 6th, 1952 issue of The State.  The most important clues on this page can be found in the group portrait by Frank Jones depicting Ira Julian of Winston-Salem (owner of Kent Bakeries?) showcasing his Tar Heel necktie.
Working backwards in time, I skimmed through previous issues of the magazine looking for other mentions of the necktie. The earliest I could find was a small listing (third from bottom) in the classified advertisements in the October 11th, issue:

Small classifieds for the necktie continued for an undetermined time.  Illustrated advertisements in The State for the necktie soon appear, the first being on November 10th: 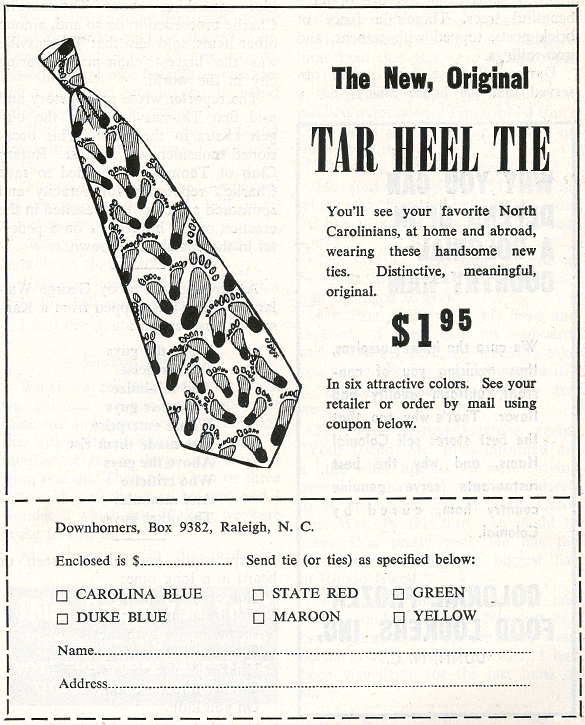 A few things pop out at me here.  If it’s new and original, why did it need to say so?  Were there impostors?  If so, how far back does the “original” go?  The caption for Frank Jones’ group portrait said that Ira Julian’s necktie had “recently” been a conversation piece.  When was Hans Hiedemann’s recital at Salem College?  And who or what is the “Downhomers?”  Designer?  Manufacturer?  Distributor?  There is no listing in the Raleigh 1952 city directory for that company.  My last observation is that the necktie came in six different versions, three of which sport collegiate colors—presumably for wider appeal on campuses where wearing neckties was commonplace, and alumni, too.
The November 8th issue of The State contains a portrait by Bill Leinbach of Bart Leiper, then newly appointed executive director of Western North Carolina Highlanders, Inc. wearing the necktie with a dark shirt.  The caption says Leiper now “sells his native State to tourists” by wearing the “Tar-Heel-splattered” necktie, “Just so no one could be in doubt as to his new mission.”  The most prominent depiction, however, of the Tar Heel necktie in The State made its splash on the November 22nd cover:

Well that’s as far as I can take this for now.Keen readers of A Hugh to View may recall seeing this tie in a previous post, as Bill Sharpe and Orville Campbell both don the tie in 1956 for the Honorary Tar Heels gathering in New York City.  Below is another scene from that event, Orville Campbell and Andy Griffith arm-in-arm.

I did check in the North Carolina Collection Gallery and none of the six flavors of The Original Tar Heel Necktie are among the other neckties in its holdings.  Would anyone possibly still have one or more in their closet who would be willing to donate this seemingly one-time popular fashion statement to the gallery to add to its sartorial holdings?