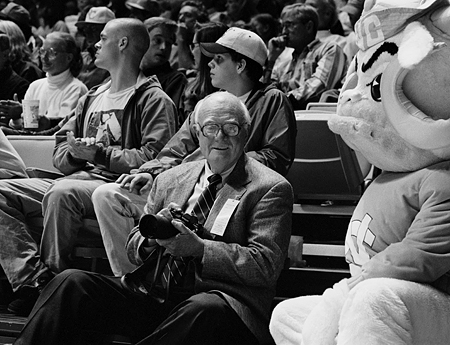 “The purpose of the North Carolina Sports Hall of Fame is to honor those persons who by excellence of their activities in or connected with the world of sports have brought recognition and esteem to themselves and to the State of North Carolina.”

On December 2, 1974 at Greensboro’s Royal Villa, the North Carolina Sports Hall of Fame staged its twelfth annual awards banquet.  Hall President Woody Durham was Master of Ceremonies.  On that Monday evening, UNC’s great All America end Art Weiner was introduced by his friend Hugh Morton.  It is the custom for each inductee to present to the hall a memento or two of his or her career in sports.  In addition to the 1949 Carolina–Duke game ball, Weiner presented an enlarged, framed, color photograph of himself and UNC Head Football Coach Carl Snavely, taken during the 1949 season by Hugh Morton.
On May 2, 2013, when the North Carolina Sports Hall of Fame induction ceremony will be staged at the Raleigh Convention Center, eleven new inductees will be added to the list of 289 legendary sports figures at the 50th annual banquet.
Among those new inductees will be a man who has been associated with the North Carolina Sports Hall of Fame since it all began in 1962.  He was on the first board of directors, was vice president in 1974, and president in 1975—and probably attended more induction ceremonies over the years than anyone else.  And yes he photographed them as well because his name is Hugh Morton.
When the North Carolina Sports Hall of Fame inducts its Class of 2013, Hugh Morton will take his rightful place among the honorees.  Joining Morton on that evening will be Kelvin Bryant, Wade Garrett, Bill Guthridge, Tommy Helms, Marion Kirby, Rich McGeorge, Bob Quincy, Marty Sheets, and Mildred Southern.
Hugh Morton dominated the state of North Carolina for seventy years as the Dean of Photographers, and photographing sports was his passion.  Whether it be a game with his beloved UNC Tar Heels, or NC State, Duke, or Wake Forest, Morton was there for the big ones. His photographic portfolio has been captured in four major books and the entire body of his work is now a part of the North Carolina Collection at Wilson Library on the UNC campus. His images of hall members have become familiar to sports fans across the Tar Heel state: Dean Smith, Dale Earnhardt, Michael Jordan, Charlie Justice, Richard Petty, Bones McKinney, Wallace Wade, “Peahead” Walker, Billy Joe Patton, Jim Beatty, and “Ace” Parker.  Morton became close friends with many of the Hall of Famers, and he not only photographed them on the field or court, but he also took images of them away from the game.
So come this spring, Hugh McRae Morton will join his buddies Dean, Dale, Michael, Charlie, Richard, Bones and a couple hundred others in the North Carolina Sports Hall of Fame.  An honor truly deserved.
I wonder what the Morton family will offer as Hugh’s memento to the Hall?  Would you believe a photograph or two?

3 thoughts on “In recognition of greatness”