One of those occasions struck a couple weeks ago, so I wandered off to the unidentified nonflying objects in “Area 5.1” (actually, the unidentified negatives in series 5.1) of the Morton Collection: “University of North Carolina at Chapel Hill, 1939–early 2000s / Student Life, 1939-1942.”   There are many unidentified negatives in that portion of the collection, including many posed yet candid portraits.
As I examined one negative at a time, I saw a face that was immediately recognizable: Louis Harris.  (Lou Harris, who became an important American pollster, has been mentioned in a few posts and an essay thus far here at A View to Hugh.)  The portrait in hand seemed familiar, and I soon located it in the “Senior Personalities” section of the 1942 UNC yearbook, The Yackety Yack. 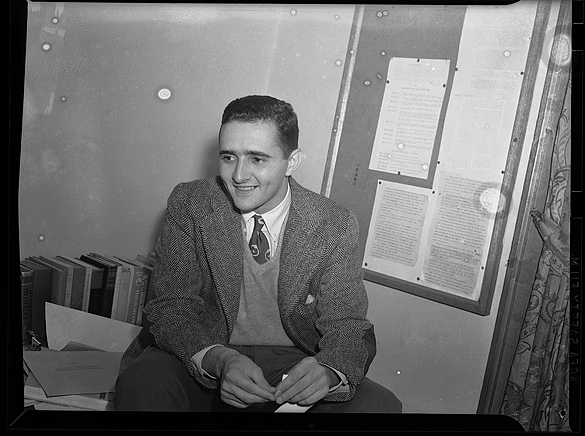 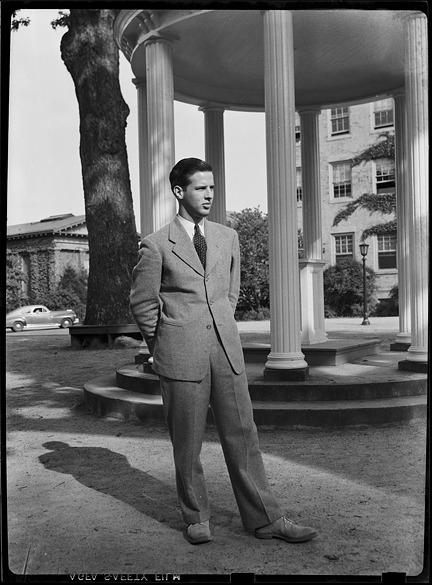 
Eugene Roy Witten (misspelled in the Yackety Yack caption) played an interesting role in the history of UNC student publications.  Although he may have had earlier unacknowledged contributions, Witten’s name first appears as a cartoonist in the masthead of the October 1939 issue of the then soon-to-be-ill-fated student humor magazine The Carolina Buccaneer.  The student publication rode a problematic seesaw from its beginnings in 1924, but the Buccaneer’s eventual downfall was the cover, and to some extent the contents, of its infamous “sex issue” of November 1939.  Witten had one innocuous (by today’s standards, at least) cartoon included in that issue.  The real controversy, however, centered on the magazine’s cover by cartoonist Hight Moore—and the fallout reached far beyond the campus walls.
The details of the magazine’s final saga would take this blog post astray.  In brief, on Friday, November 10th, The Daily Tar Heel editor Martin Harmon wrote a satirical “Buc Review” in the form of a letter to his Aunt Emmy in New Orleans.  That evening, the Student Council directed the Publications Union Board to destroy all 3,000 copies of the issue shortly before its release date.  Sunday’s Daily Tar Heel decried a “Crisis in Student Government.”  On Monday, November 13th, the Publications Union Board decided to reuse parts of the magazine and publish a revised edition, which was to be issued by the end of the week.  Later that evening, the Student Legislature voted 18-13 against the Student Council ban.  A month later, a DTH editorial called the whole affair “the most sensational, the most astounding, the most stupendous bombshell of the [fall] quarter.”

“Let bygones be bygones!” the Buccaneer‘s editors wrote in the ensuing December issue.  After the last issue of the school year published in May, however, the magazine was gone.  What makes this story relevant to readers of the A View to Hugh?  Between its November death knell and May burial, Hugh Morton joined The Carolina Buccaneer masthead as a photographer.  In the March 1940 issue, Morton contributed a photographic essay entitled “‘That’ Week-End” that included his photograph of Glen Gray and the Casa Loma Band performing during the Mid-Winter German dances held on February 15th and 16th.
Why did Morton join the Carolina Buccaneer staff as a freshman, just a few months after the sex issue fiasco?  We may never know.  This time period, however, seems to have been an important crossroads in Morton’s early career as a photographer.  According to a November 1941 DTH article, Morton’s camera had been stolen shortly after he arrived on campus in September 1939.  He didn’t replace it until he bought a camera in a Raleigh pawn shop during the winter of 1940, after which he “immediately” began to work for The Carolina Buccaneer.  With the Glen Gray and Mid-Winter German dance photographs as evidence, that would be mid February.  Additionally, a montage of photographs by G. B. Lamm and Morton appear on the cover of the March 1940 issue of Carolina Magazine.  Morton would go on to photograph for several student and university publications.
An important connection may have been made during or after the Buccaneer debacle: the president of the Publications Union Board who salvaged The Carolina Bucaneer and kept at least some of its parts from the incinerator was senior Edward L. Rankin, Jr..  Nearly fifty years later Rankin would co-author with Morton the book Making a Difference in North Carolina published in 1988.  It would be fascinating to know if Morton and Rankin’s association began at UNC, or in later years.


Jump ahead to autumn 1940, and re-enter Gene Witten, named in November to be Editor-in-Chief of Tar an’ Feathers, successor to The Carolina Buccaneer.  Witten’s charge was to produce a “clean” humor magazine.  In the first issue Witten contributed one cartoon, which was more like a sketch with a caption beneath—his only cartoon published in the magazine.  Witten named Lamm, the upperclassmen to Morton, as the photography editor.
Working on another batch of negatives several days after the initial Harris and Taylor discoveries, I uncovered another unidentified portrait of Witten. In this portrait (shown above), Witten is reading (or glancing at, given the strange angle of the newspaper) a copy of the February 4th, 1941 Daily Tar Heel. This portrait also appears in the 1941 Yackety Yack, but it’s cropped vertically.  The typewriter to his left is branded with a “TH” that likely stands for Tar Heel, and may have been photographed in the DTH offices.
Curious about Witten’s life after UNC, an Internet search revealed a website dedicated to his life as an artist.  Witten was a business major at UNC, and worked briefly after college in a New York City advertising agency.  According to the Witten website, after serving in the United States Navy during World War II he “was impassioned to leave ‘business’ and entered the Art Students League in Manhattan in 1946. At the age of 25 he decided his life’s work was to paint.” In addition to working as an artist for decades, Witten became a master frame maker.   He passed away on January 13, 2004.