Skip to content
Back in 2009 Elizabeth Hull wrote a post on the anniversary of the Wilmington Terminal Company fire, which occurred sixty years ago on March 9th, 1953.  The images she selected for that post are 4×5 color transparencies.  Hugh Morton also made several black-and-white negatives of the catastrophe, two of which made the front page of the Wilmington newspapers.  There are seven black-and-white negatives in the collection, plus the puzzler at the end of this post, are not currently in the online collection.

The headline for this post is the headline that accompanied a photographic essay of the event by the staff photographer(s) in the same issue of the Wilmington Morning Star.  The photograph above was on the front page of the March 10th issue.  It’s presented above as cropped for the newspaper, and below without cropping.  (The stain in the upper right portion of the frame does not seem to be in the published version.) 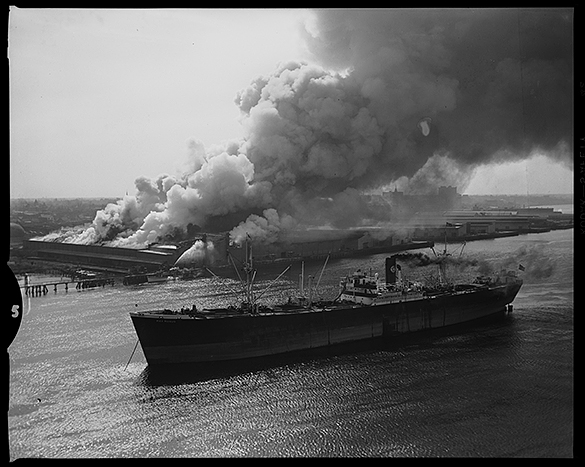 According to the caption in the Wilmington Morning Star, Morton made these fire scenes approximately one hour after the fire began.  The image below made the front page, top center, of the same day of the fire in that afternoon’s Wilmington News.  The paper’s headline spanned the full page: “ADVANCE OF DOCK FIRE HALTED.”

The microfilm for the two newspapers doesn’t capture the quality of the photographs very well, so these are my visual interpretations of the images; the crops are as close as I could estimate to those used by the newspapers.  Here’s the above photograph without cropping. 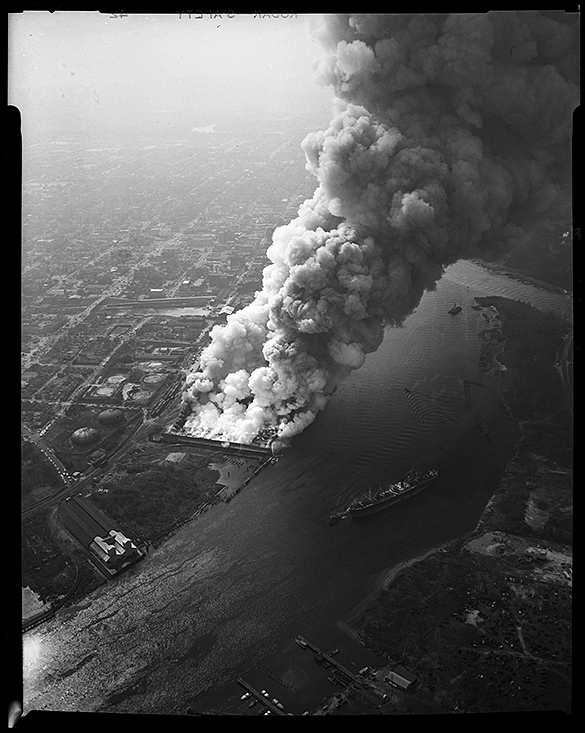 A sampling of other images made by Morton follow.  I have not had an opportunity to check other newspapers to see if any of the images shown here may also have been published.  Some of the negatives have pre-exposed numbers on one edge, giving you a clue to the order in which Morton photographed the event.  Other negatives, however, are not numbered, so it may be that he had more than one camera with a different lens and/or film combinations. (Remember he shot color transparencies, too.)

I wondered as I worked with these photographs what made Morton take to the air.  Did his military photography experience speak to his sense of the best perspective for the story?  Did Morton recognize that the local newspapers’ staff photographers would flock to “ground zero” and so knew that his aerial views would be unique?  Maybe both? 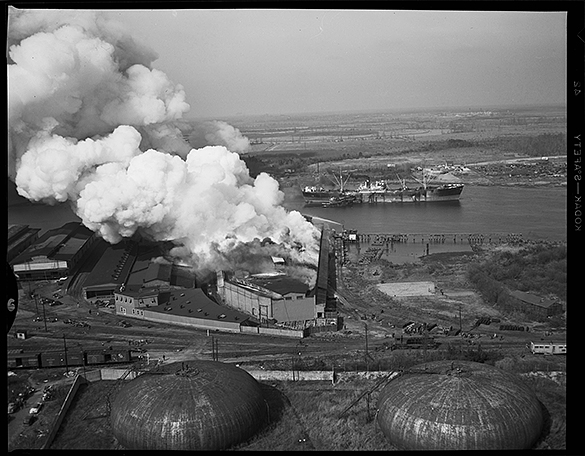 The last photograph (below) is a bit of a puzzler.  It is a 3×4-inch negative—all the others are 4×5—and there is no sign of fire.  The negative envelope is labeled “Fire, Waterfront” but I suspect the negative is much earlier—perhaps prior to WWII, as Morton tended to use the 4×5 format after the war, and the 3×4 format before.  That’s not to say, however, that he didn’t use the smaller format after the war.  Maybe someone with expertise on the Wilmington waterfront can explore this image and provide an accurate or estimated date.  The bridge on the far right may also assist in dating the negative.