Today is “Library Snapshot Day” on the UNC-Chapel Hill campus, so what better way for A Hugh to Hugh to participate than to highlight photographs of the library made by Hugh Morton.  Opened in 1929, The University Library was only ten years old when Morton arrived as a student in the autumn of 1939.  Renamed Wilson Library in 1956, the building has been home for the library’s special collections since 1987, including Morton’s photographic legacy since 2006.


The photograph above dates from Morton’s post World War II days, but naturally he photographed The University Library as a student, too.  The Daily Tar Heel published the  two following photographs on September 26, 1941 to illustrate an article about remodeling and changes in the library.  The top image depicts the reserve and general reading room (what is now the Pleasants Family Assembly Room). 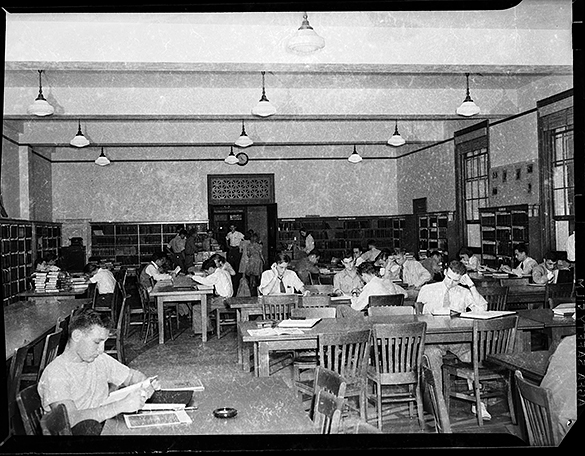 The photograph below shows the new browsing room and Bull’s Head Bookshop, at the time just moved from the first floor to the second. 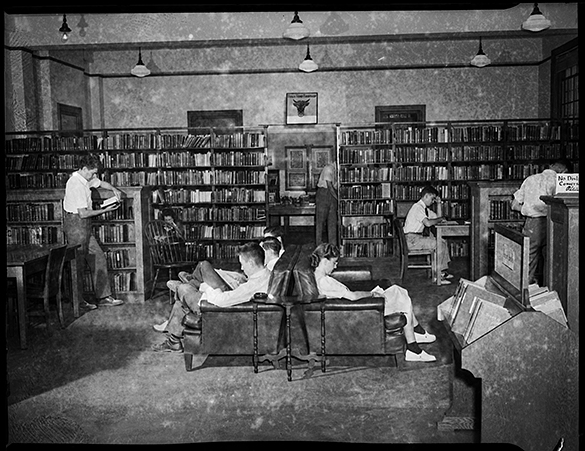 Charles E. Rush, University Librarian, made the changes because, “he felt the [undergraduate] students were either too timid or too rushed to get books on their fields other than those assigned.”  In the interest of comfort, Rush permitted students to smoke in the east end of the room, with ashtrays placed on the ends of the tables.  You can see an ashtray on the table in the top photograph.

A January 2012, A View to Hugh blog post on the UNC Information Center for Civilian Morale during World War II features a photograph made in the lobby of the library, which also includes Rush who had had begun his appointment at UNC merely half a year before the bombing of Pearl Harbor.
More photographs of Wilson Library can be seen in the online collection.