In 1962, when Charlotte businessman Jack Wood and attorney Lloyd Caudle followed up with the idea for a North Carolina Sports Hall of Fame, they put together a distinguished board of directors which included Hugh Morton.  Fifty-one years later on May 2, 2013, Morton will come full-circle when he will be inducted into that select group of North Carolina sports legends.  In today’s post, Morton collection volunteer Jack Hilliard celebrates his friend’s call to the Hall. 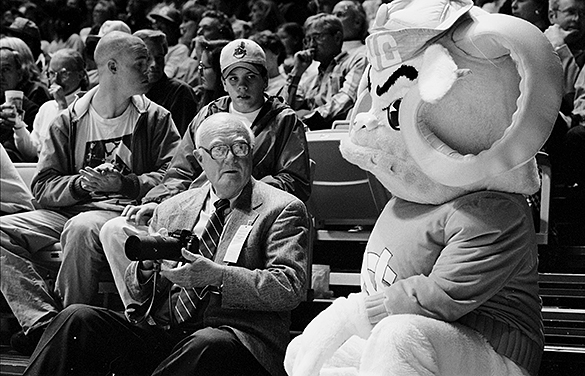 On October 12, 2009, Asheville’s Citizen-Times columnist Keith Jarrett wrote about his first reaction to that year’s North Carolina Sports Hall of Fame ballot and its several western North Carolina candidates. After listing a half-dozen or so athletes, he said:

Another local nominee is included in the category of contributor, and in the spirit of full disclosure my vote is both a personal and professional choice.
Hugh Morton was a friend, and just about everyone who ever met this warm, caring man could say the same.  His fame came from his work at converting Grandfather Mountain into a High Country and NC treasure and his lifelong efforts as a conservationist.
But Hugh was also a great photographer, and for decades he would climb into his car and make the drive from his home in Linville to Chapel Hill and capture his beloved Tar Heels on film. . . .
His nature and animal photos were also brilliant, but his collection of work in sports photography is a catalog of the history of the ACC, and especially North Carolina.
If he is not a Hall of Famer, they should close the doors.

Hugh Morton mentored several generations of sports photographers and as part of that mentoring process he strongly advocated good sportsmanship within the Atlantic Coast Conference.  He always said “pull for your team, not against your opponent.”  He also sponsored “family outings” at Grandfather Mountain for conference schools for over 45 years.
So, almost four years after Jarrett wrote his column, North Carolina Sports Hall of Fame fans can breathe easier.  The doors will remain open . . . Hugh Morton will take his rightful place in the hall on Thursday night, May 2, 2013 at Raleigh’s Convention Center as part of the organization’s fiftieth induction ceremony.  Hugh’s grandson Jack Morton will represent the Morton family.  [Editor’s note: here’s an article, “My Grandfather and his Camera” written by Jack Morton in 2003 that recalls the day depicted in the photograph below—” . . . it was the first time that I had ever taken photos alongside him.”]


Also as part of the class of 2013 is longtime Morton friend, the late Bob Quincy.  World War II bomber pilot and sports writer for both The Charlotte News and The Charlotte Observer, Quincy also spent four years as sports information director at UNC.  His books Choo Choo: The Charlie Justice Story (1958) and They Made the Bell Tower Chime (1973) are filled with Hugh Morton images.

On Thursday evening, Hugh and Bob will join their dear friends Choo Choo, Bones, and Peahead, . . . Francis, Arnie, Dale, and Jake along with 291 other sports legends in the North Carolina Sports Hall of Fame.

2 thoughts on “The Doors Shall Remain Open”