There’s going to be a special birthday party at the North Carolina Museum of History in Raleigh on June 8, 2013: Our State magazine will be 80 years old.  The celebration will begin at 11 AM and will include musical entertainment, exhibits, games and demonstrations.  A View to Hugh would like to congratulate Our State on this milestone.  Our volunteer contributor Jack Hilliard takes a personal look—through the filter of Hugh Morton’s lens—at some of the magazine’s fascinating history, which began as The State. 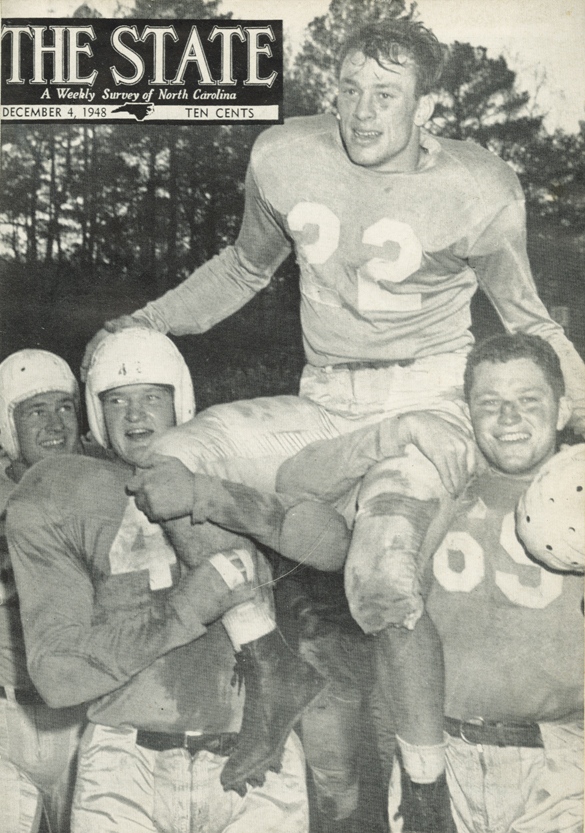 My first recollection of The State magazine was around Christmas time 1948 when I was visiting my grandmother.  She knew that Charlie Justice was my hero, so she had saved for me her copy of the December 4th issue, which featured a Hugh Morton cover picture of Justice following the ‘48 UNC vs. Duke game. I have been a fan of the magazine ever since that day.
At that time, the magazine was already 15 years old, but it was new to me and I didn’t know that there had been a previous cover with a photograph of Justice by Morton about a year before.  (I was able to get that earlier issue about 5 years later when I was working on a fund-raising scrap paper drive.)


WPTF (Raleigh) radio broadcaster Carl Goerch had started the magazine back in the late spring of 1933.  In the midst of the Great Depression he proposed a magazine that would be “a weekly survey of North Carolina, dedicated to cause people to be more appreciative of their state by becoming better acquainted with it.”  In order to publish his dream, Goerch needed advertisers, but times were tough so he told his prospective clients, “let me run an ad for you in the first four issues . . . if at the end of the month, you find that the publication isn’t worth anything, you can discontinue.  On the other hand, if you think it really is worthwhile, I hope you’ll continue using space.”  His first prospect was S. Clay Williams, president of R. J. Reynolds Tobacco Co.  Others who were willing to invest were Julian Price of Jefferson Standard Life, Robert M. Hanes of Wachovia Bank, Louis Sutton of Carolina Power & Light, Norman Cocke of Duke Power, W. D. (Billy) Carmichael of Liggett & Myers Tobacco Co., and Durham banker John Sprunt Hill.
The first issue hit the streets on June 3, 1933 for ten cents a copy, or three dollars for a year’s subscription.  Pictured on that first cover was North Carolina Governor J. C. B. Ehringhaus and inside were the first of Goerch’s long-running departments such as “Funny Experiences” and “Just One Thing after Another.”
The magazine “met a very favorable impression and kept right on growing,” according to Goerch, selling 2,500 copies.  Goerch and his magazine started out in an office in the Lawyers Building in Raleigh with a staff of two, including himself.  Inez Gehring took care of the office and Goerch did just about everything else, with help from some trusted freelance writers who sent in articles for which they were paid $2.50 per article.  Among those freelancers were W. O. Saunders, Tom Bost, Paul Green, Billy Arthur, H. G. Jones, Bill Sharpe, and others.

In addition to the impressive freelance writers were equally talented photographers like Aycock Brown, John Hemmer, and Hugh Morton.  Morton would go on to become a most prolific contributor with dozens of photographs and more than sixty photo covers between March 8, 1941 (uncredited) and December 3, 1949.  Three of the four issues published in January 1950 featured Morton photographs on their covers.  In the January 28th issue, The State named Charlie Justice “North Carolina’s Man of the Year for 1949,” with a Morton portrait of the Justice family on the cover.
When the magazine celebrated its tenth anniversary with the issue of June 5, 1943, the front cover consisted of a letter to Goerch from Governor J. Melville Broughton.
“This unique magazine under your able leadership has lived up to its name in the highest degree.”  Inside, in an editorial, Goerch said, “the last ten years have been the happiest of my entire life.”  Carl Goerch published the magazine for eighteen years before turning it over to Bill Sharpe on September 1, 1951.  A party was held in Sharpe’s honor when he took over the magazine and Hugh Morton was there and took pictures.

Sharpe’s stated philosophy for the magazine was:

North Carolina is settled by a whimsical race, forever busy at something interesting.  Somehow they continue to live in the most fascinating places, do the most ingenious things, have the most incredible experiences, catch the most outlandish fish and invent the most fantastic instruments.

Goerch continued to write columns and handle advertising.  Sharpe added his well-written columns—“Travel Topics,” “From Manteo to Murphy,” and “Remember.”  The magazine published its first full-color cover with the September 13, 1952 issue, featuring a photograph by Sebastian Sommer of a family picnicking along the Blue Ridge Parkway in the fall with Grandfather Mountain in distance.  In December the new “Down Home in North Carolina” slogan replaced the old “A Weekly Survey.”
In 1954 the magazine switched from a weekly to a bi-monthly.  W. B. Wright joined the team as advertising manager.  A Raleigh native, a navy veteran, and a Duke graduate, Wright fit right in.  Under Sharpe’s leadership, the magazine became somewhat of a lightning rod for conservative thought.  Sharpe was noted for his editorials against “centralization of power in the federal government.”  Wright became co-publisher with Sharpe in 1965. 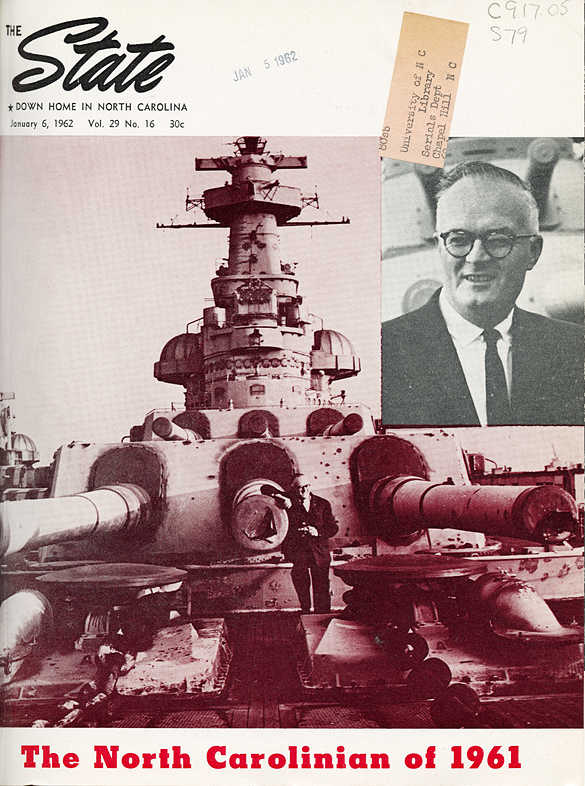 In the January 6, 1962 issue, the magazine announced Hugh Morton as its “North Carolinian of 1961.”  Morton had continued to make a huge photographic contribution to the magazine, but was likely selected because of his efforts to bring the battleship USS North Carolina home to Wilmington.  In the October 1, 1968 issue, Hugh Morton listed his favorite ten photographs.  His 1968 top-ten list turned out to be a good cross-section of what would become his almost-seventy-year portfolio.
On January 6, 1970, Bill Sharpe died suddenly and the logical choice to take over was W. B. (Bill) Wright, who had earlier worked for Sharpe during his efforts to establish a weekly newspaper in Winston-Salem in 1940.  Wright followed in the footsteps of Goerch and Sharpe with little change to the magazine.
The sad news on Monday, September 16, 1974 was that Carl Goerch had died at his home in Raleigh.  He was praised for “accurately informing North Carolinians of their history and progress” during his 55 years of work for newspapers, magazines, radio, and television, and as a public speaker.  Carl Goerch was 83 years old. 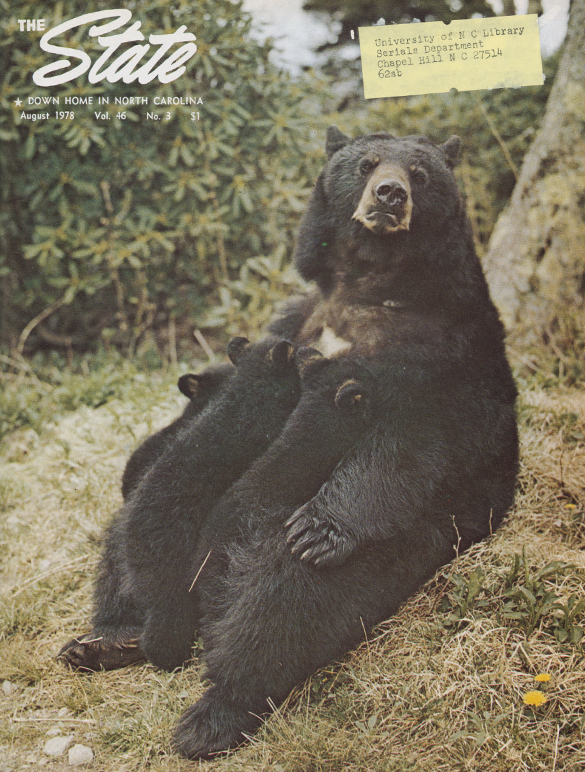 By the time the August, 1978 issued arrived on the scene, the magazine was published monthly and that August issue featured a Morton cover image of Grandfather Mountain’s most famous citizen, Mildred the Bear, feeding a cub. The issue turned out to be one of the most popular and Bill Wright staged a contest for readers to title the Morton photograph. 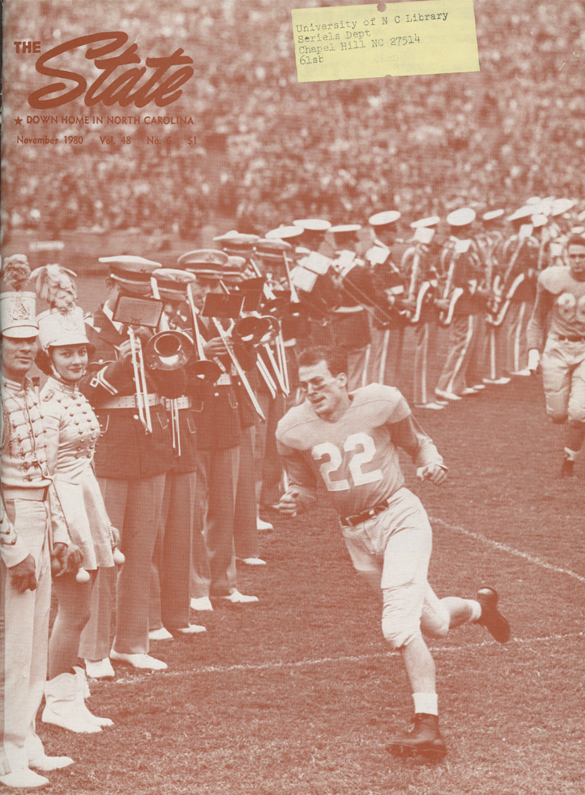 With the November, 1980 issue, there was yet another Hugh Morton cover photo of UNC’s Charlie Justice.  Morton was having a photo exhibit in the Morehead Planetarium and the magazine was promoting the event. The Justice image selected for the cover was a familiar one and was described as Justice running onto the field at the Cotton Bowl in Dallas, his last varsity game at UNC.  The enlarged image on the cover gave one the ability to see the Justice uniform and it was clearly a 1948 style—not the one worn at the Cotton Bowl on January 2, 1950.
In a 1984 interview, I asked Justice about the uniform discrepancy, but he couldn’t explain it.  When Justice passed away in October of 2003, the same image was used in several North Carolina newspapers with the same caption. Then in 2008, Elizabeth Hull sent me a series of Justice images for additional identification and this image was part of the group; however she had scanned the entire negative image and the background was clearly Kenan Stadium.  It seems that somewhere along the way, two similar negatives had gotten switched and for more than thirty years this image was incorrectly identified.  It is now correct in the Morton online collection. 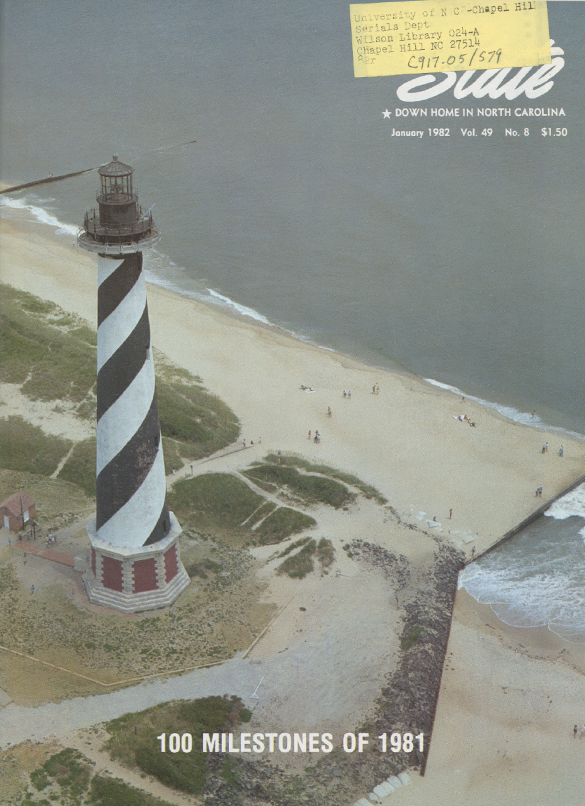 The January, 1982 issue cover featured a Morton bird’s-eye-view photograph of the Cape Hatteras Light.  At the time, Morton was heading up a committee to save the historic structure from being swept into the sea.
In its fiftieth anniversary edition, actually published in January, 1984, Bill Wright said:
“The magazine hasn’t changed a great deal over the years, and therein might lie an explanation to its success.”  The front cover of that fiftieth issue contained a montage of magazine covers from years past, including the Morton image of Mildred from 1978.
Bill Wright continued to publish The State until 1987 when he sold it to Shaw Publishing Company of Charlotte. New publisher Sam Rogers brought a new design with fresh typefaces and eye-catching color.  These changes brought letters, pro and con, but Rogers insisted “the flavor is still present.”
The November 1992 issue featured a Hugh Morton profile, complete with a picture of Morton on the cover. 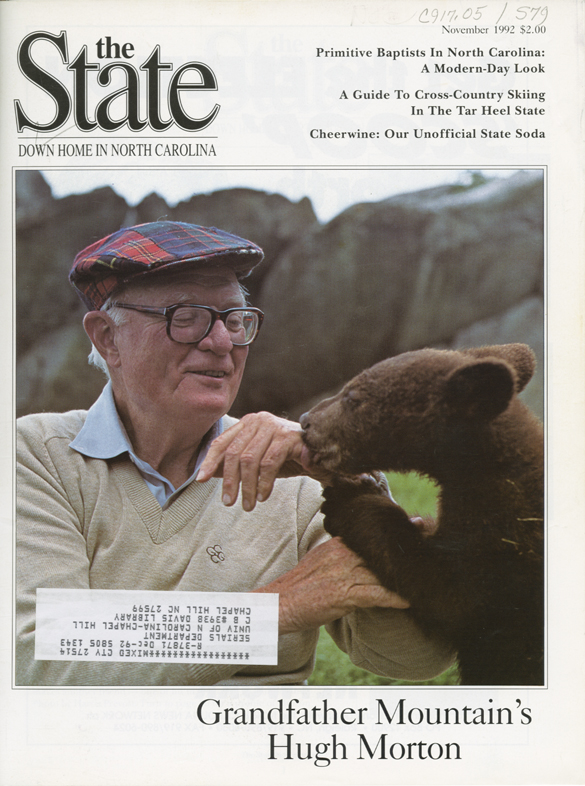 Rogers continued publishing the magazine for the next nine years.  Then, in the spring of 1996—enter Bernard (Bernie) Mann.   A native New Yorker, like Carl Goerch, Bernie Mann, president of Mann Media, Inc, bought the operation, moved the editorial offices from Charlotte to Greensboro, and expanded the staff from four to fourteen. Soon after Mann took over the publishing duties, he was presented some amazing information.  A well-known research firm presented him a report that said at most magazines, 35 to 37 percent of the readers renewed their subscriptions when they came due.  A rate of 50 percent was considered phenomenal.  The State’s rate was 87 percent. One of the researchers told Mann, “you didn’t buy a magazine, you bought a public trust.”
Mann made several changes to the magazine, and when the August 1996 issue arrived, readers first noticed a name change.  Gone was The State, and replacing it was Our State.  “I thought it was more inclusive,” Mann said of the change.  “I thought it gave a more personal feel.”
I remember in early May 1998 Lee Kinard, “Good Morning Show” executive producer and my boss at WFMY-TV, called me in one morning and said, “We need to do a feature on Our State magazine.”  I called marketing director Amy Jo (Wood) Pasquini, and she graciously set up a time when we could come over for an interview.  On the morning of May 26, 1998 Kinard, photographer George Vaughn, and I went over to the magazine office and met with Pasquini, Mann, and editor Mary Ellis.  I remember how impressed we were with these folks who went out their way to provide us with a fantastic segment for our show.
The June 2003 issue celebrated the magazine’s 70th birthday with a 188-page collector’s edition.  Now in June, 2013, issue number 2047 is out with a keepsake edition celebrating another milestone: an 80th birthday.  I was not surprised that the photo essay featuring many of the magazine’s covers, which is on pages 78 through 103, includes numerous Hugh Morton cover photographs.