Carolina’s football history with the Naval Academy goes all the way back to 1899, but it was the game in 1957 that Tar Heels often put on their “greatest wins” list.  Morton volunteer/contributor Jack Hilliard takes a brief look at the gridiron history against Navy and highlights that 1957 encounter.
But first . . . an editor’s note about the photographs used in this post.  Something a bit different seems to have happened with Hugh Morton during his coverage of the October 5th, 1957 Navy versus UNC contest.  There are twenty surviving 120 format negatives from the day.  Most of the negatives depict naval cadets in the stands, a few exposures of the team mascots, and a few of the Navy sidelines.  There are no game action photographs and no scenes from the UNC sidelines.  I checked five newspapers and they either did not print photographs or they used staff photographers.  The only Morton photograph was one small head shot of the two UNC scorers that appeared in the Charlotte News–and that negative did not turn up in the scores of unidentified negatives (at least not yet!).  UNC’s Alumni Review game summary used photographs from Durham’s Herald Sun and the Greensboro Daily News. 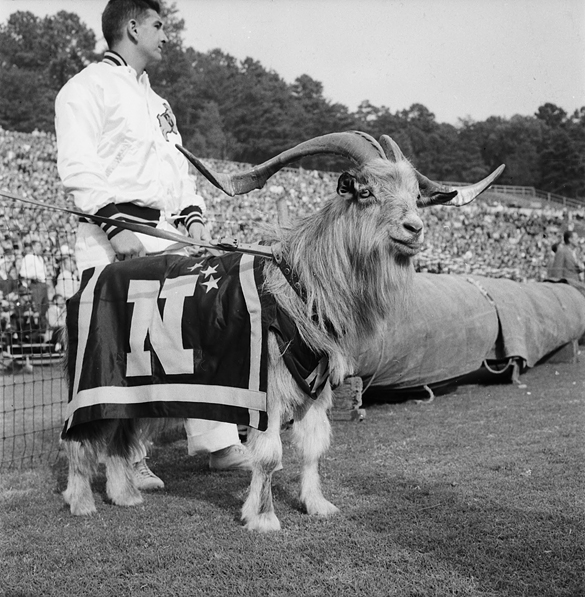 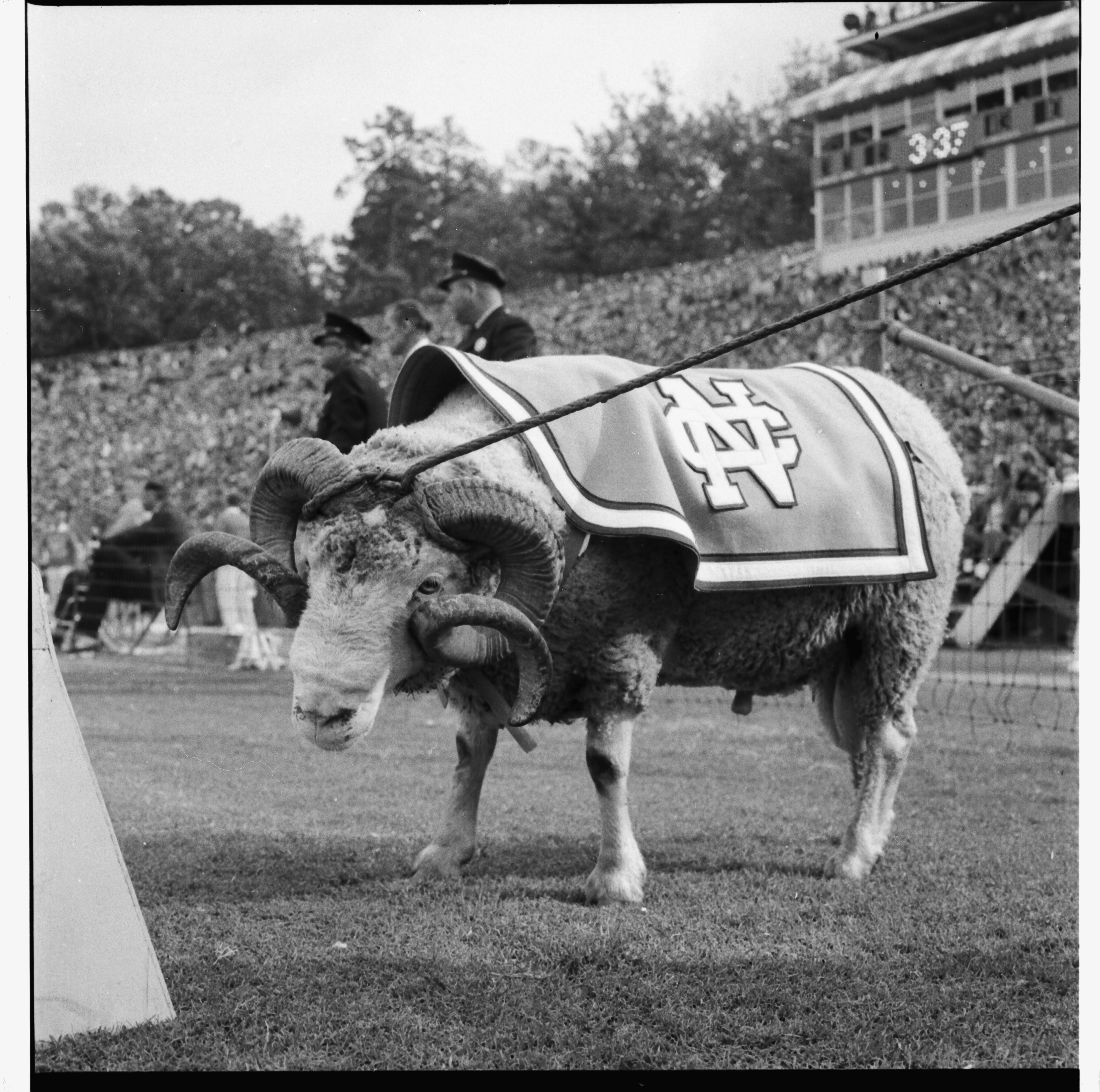 . . . we know Uncle Jim (Tatum) and he always comes up with something.

—Marty Zad, sportswriter who covered Navy for The Washington Post in a pregame interview, October 5, 1957

Ten seasons had passed since UNC’s great win over Navy in Baltimore on October 19, 1946 with Charlie Justice and Walt Pupa leading the way that day before 35,000 fans. The ’46 meeting gave Carolina its first win over the Middies in the classic series.  Not only did Carolina lose in 1899, but they lost in 1905 with a team led by Dr. Foy Roberson, Max Gardner and Nat Townsend.  They lost again in 1906.  And not only did they lose those first three games, they were held scoreless.  So that 21 to 14 win in ’46 was a big deal.
But it was a bigger deal, fifty-six years ago, when head coach Eddie Erdelatz brought his Navy team to Chapel Hill for UNC’s Law Alumni Day on October 5, 1957.  The boys from Annapolis were ranked sixth and considered by many sportswriters as “the finest in Navy history.”  Herman Hickman, in his “Hickman’s Hunches” column in Sports Illustrated said “Middies impressive each outing…NAVY.”  Smith Barrier, Sports Editor of the Greensboro Daily News predicted a Navy win touting Navy’s “weight, experience, and versatility.”  With its advertised great depth, Navy would be a 14-point favorite.
So the stage was set for the fifth meeting between the Tar Heels and the Midshipmen. 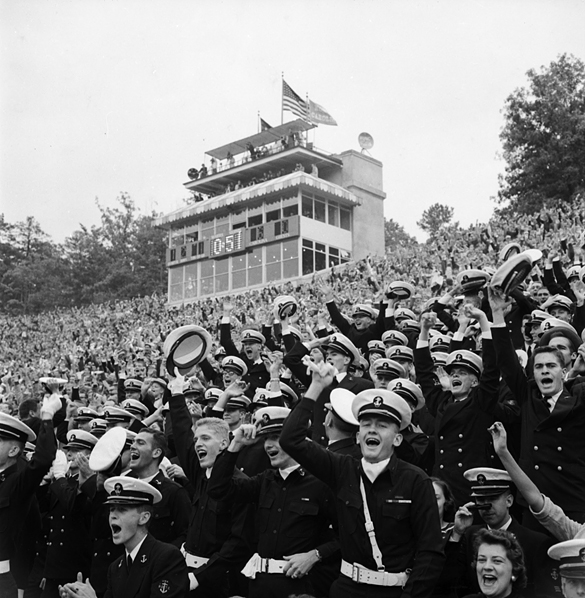 25,000 fans, most of whom were Tar Heels including Hugh Morton, poured into an October-chilly and damp Kenan Stadium, but brightening up the visitor’s side of the field was 143 cadets in Navy blue uniforms and white hats.  Their trip to Chapel Hill was a special reward for their selection as the “outstanding color company” at the Naval Academy in 1956.  They formed the entry way for the team as it came on the field.  Leading the team was Bill XIV the Navy goat.
Coming off a 26-to-0 win versus Clemson, the Tar Heels had not read Hickman or Barrier– or if they had, they ignored the predictions–and took command in the first quarter when Dave Reed went in for the first score of the game from inside the one following a Navy fumble and a nine play drive.  Bob Shupin’s point-after made the score 7 to 0 with 51 seconds remaining in the first quarter.  Navy threatened in the second quarter, but couldn’t score and Carolina’s seven points turned out to be the only first half scoring.
On their first possession of the second half, Navy had the ball at their own 31 when Quarterback Tom Forrestal dropped back to pass. Carolina’s co-captain Buddy Payne broke clear of his blocker causing Forrestal to throw short.  Tar Heel Leo Russavage was in position to make the interception with four blockers out front . . . . leading his way 32 yards for a touchdown.  (Ironically Russavage was pictured on the front cover of the game day program that Saturday afternoon).  Shupin missed the point-after-touchdown and the score was 13 to 0 through the third quarter.
Navy took Carolina’s kickoff following the Russavage touchdown, and moved in for a score.  Forrestal, halfback Ned Oldham, and halfback Harry Hurst lead the way on a 73-yard drive.  With 13:50 left in the game, Carolina led 13 to 7.
Following Navy’s kickoff, Carolina was on the move again.  This time it was Tar Heel Halfback Jim Schuler off right tackle for 61 yards for what looked like a third Carolina touchdown. . . but he stepped out of bounds at the Navy 45 right in front of Coach Tatum and the Tar Heel team.  The drive ended at the Navy 27.
The Middies took over with 7:12 on the clock, needing a TD and PAT for the win. Tar Heels John Haywood and Jim Jones bottled up the Navy attack, and Forrestal threw his fourth interception as Jack Cummings made the pick.  The Tar Heels went three and out and Navy had another chance.  Again Forrestal went to the air, and this time Buddy Payne made a one-handed circus catch at the Carolina 26.  With 1:25 remaining, the Tar Heels knew how to run out the clock and preserve a Tar Heel classic win.
Sports Illustrated reported UNC’s win this way in the October 14th issue: “After enjoying two Saturdays with the rinky-dinks, a smooth-sailing Navy ran into first-class opposition, bowed to North Carolina 13-7.  The huge Tar Heels, forever storming over the Middie line, alarmed Quarterback Tom Forrestal into passing the ball when he should have eaten it.”
Looking at the stat sheet for this game is nothing short of amazing:

The only other blemish on Navy’s 1957 record would be a 7-7 tie with Duke.  Carolina would go 4 and 3 for the remainder of the season including a win over Duke for the first time since 1949.
Against Navy, Jim Tatum was 4 and 0 (winning three times at Maryland) but he was generous and spoke highly of the Navy team.  Coach Erdelatz was something far less.  After promising to be available to the media fifteen minutes after the game, at the prescribed time, he was on the bus headed out of town.
The first words out of Tatum’s mouth at his press conference: “We got wonderful breaks in this ball game.”  When asked about Carolina’s lack of a passing attack, Tatum said,
“We called the running pass seven times in the game.  Of course, sometimes we didn’t get it started as it should have been.”  He then added, “Two things were important to our victory.  Our mental alertness and the fact that we had two teams ready instead of one. We had read all about Navy’s depth but they didn’t play the second unit much, did they?”
Tatum concluded the conference with a comment about the day’s most spectacular play: Jim Schuler’s 61-yard touchdown run that officially was only a 16-yard first down.
“I saw him step out of bounds but I was glad he kept running.  He gained a lot of confidence from that run and he’s going to make a lot more of them.”
Carolina would not play Navy again until 1984 when the Middies once again came to Chapel Hill–and this time they won 33 to 30.  Tar Heel wins in ’85 and ’87 set the stage for one of Carolina’s toughest losses: the 1989 game in a driving rain in Chapel Hill.  Head Coach Mack Brown describes the ‘89 loss in his 2001 book, One Heartbeat: a Philosophy of Teamwork, Life, and Leadership.

My second year at North Carolina, we lost to Navy 12-7, and it was the first time in three years that they had beaten a Division One team.  After the game, I went out to my car and just sat there and cried because I knew we had better players and had lost a game we shouldn’t have lost.

Overall the series stands at five wins for each team. The most recent meeting was a 28 to 14 Mack Brown Tar Heel win in Chapel Hill in 1992.

One thought on “Tatum’s Tar Heels Sink the Navy”