Today, July 16, 2014, marks the 45th anniversary of the launch of Apollo 11 carrying the first men to land on the lunar surface. One of the primary stepping-stones for that mission was the launch and flight of Apollo 9.  Like the Apollo 11 launch, there is an Apollo 9–Hugh Morton connection.  So, on this special anniversary, Morton Collection volunteer Jack Hilliard relates a possible scenario for Morton’s Apollo 9 slides. 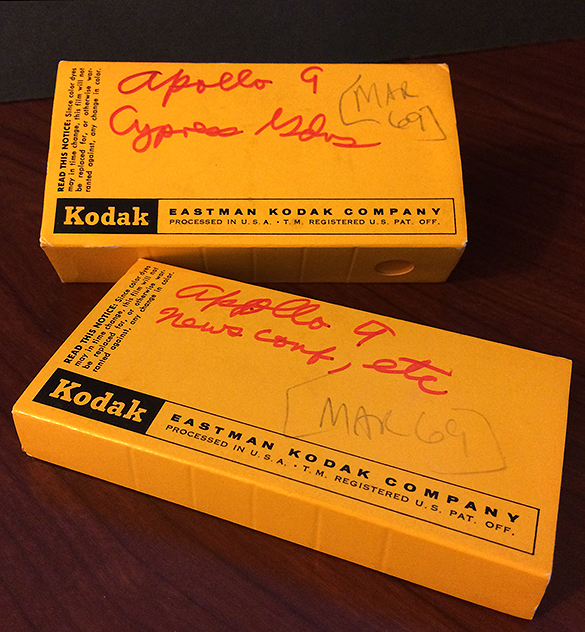 On a recent visit to the Hugh Morton Collection at the Wilson Library on the UNC campus, Photographic Archivist Stephen Fletcher showed me a recent group of slides to be added to the Hugh Morton photo collection.  Of particular interest were two boxes of color slides marked “Apollo 9.” While I didn’t attend the launch of Apollo 9 from NASA’s Kennedy Space Center, I remember well following the progress on television.

Apollo 9 was the third manned mission of the Apollo program and the first flight of the Command Service Module (CSM) with the Lunar Excursion Module (LEM).  The Command Module was named “Gumdrop” because it arrived at the Kennedy Space Center wrapped in blue cellophane. The Lunar Module was named “Spider,” because of its awkward, gangly appearance. The mission was the second launch of a Saturn V (Five) rocket.  The three-person crew, Commander James McDivitt, Command Module Pilot David Scott and Lunar Module Pilot Rusty Schweickart, all trained at the Morehead Planetarium on the UNC campus.

The Apollo 9 preliminary countdown began at 5 am on Saturday, February 22, 1969 and proceeded without problems.  The terminal count started on February 27th at 10 pm.  Twelve hours into that count, there was a three hour built-in hold.  During this hold NASA decided to recycle the count to T minus 42 hours which would put the launch no earlier than Monday, March 3rd at 11 am.  The reason for the delay: the Apollo 9 crew had developed colds.  The delay gave the crew time to recover in time for a March 3rd launch.
The crew spent 10 days in low Earth orbit testing and docking the two spacecrafts. At one point, McDivitt and Schweickart flew the Lunar Module 100 miles away from the Command Module.  On board Apollo 9 were special lightweight, lint-free wash cloths and towels developed by the textile school at North Carolina State.
The 152-orbit mission ended in the calm Atlantic, in sight of the recovery carrier USS Guadalcanal, on March 13, 1969.  That final day in orbit, however, was a busy one. The crew took pictures of the United States from coast to coast.  The picture taken of the North Carolina Outer Banks has become a classic. 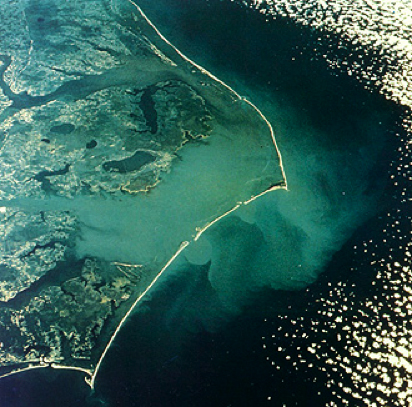 From the two boxes of Morton slides shown above, plus two others, we can determine that Hugh and Julia made a trip to Florida about mid-February, 1969.  Morton labelled a third box of slides “Busch Gardens / Tampa horse races”; Kodak processed and date stamped those slides “Feb 69.”  The fourth box, processed in March like the two shown above, Morton labeled “Cypress Gardens / Homosossa River.”  The Homosossa River is on the Gulf Coast not far north of Tampa. Among the Cypress Gardens slides is the scene below. 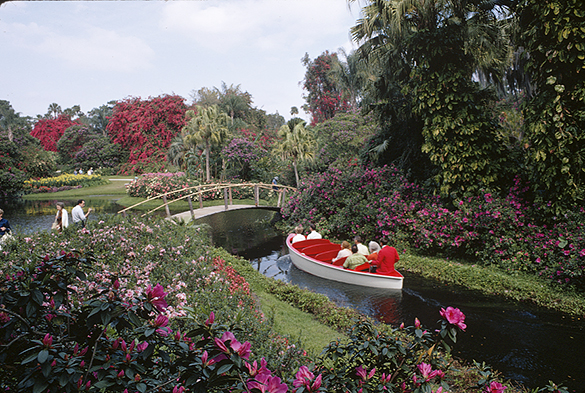 The date stamps and frame numbers on the slides suggest the Mortons traveled from the Gulf Coast to Cypress Gardens mid-state near Winter Haven, and then to the Kennedy Space Center.  They took one of the visitor center bus tours of the complex, and there are 34 slides taken at the Space Center. 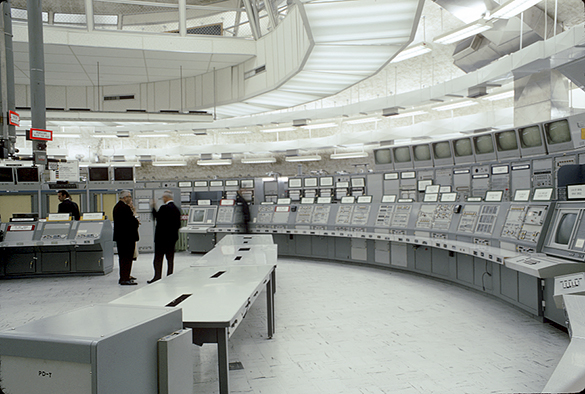 On pad A at launch complex 39, Apollo 9 was in place and preparing for a February 28th launch.  The Apollo/Saturn vehicle had been rolled to the pad on January 3rd.  The Mortons were at the pad A press site on February 27th because the Mobile Service Structure (MSS) has been rolled back and the launch vehicle is standing free, and that event occurs the day before a scheduled launch. 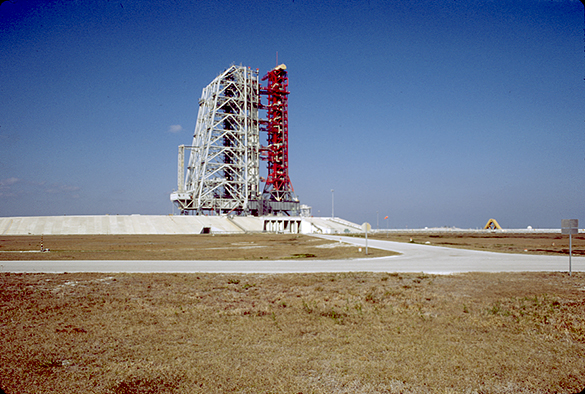 There were about 1,000 other members of the media at the press site and about 10,000 space watchers along the Florida coast.  Among the special invited guests was North Carolina Governor Robert Scott, but his schedule back in Raleigh didn’t permit a KSC visit. 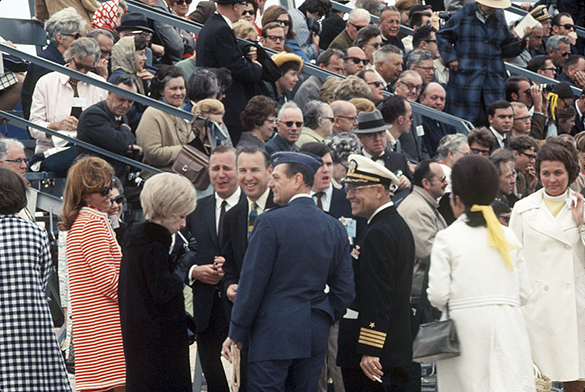 Now, the mystery part of our story.

While writing posts and comments for A View to Hugh, I have often said, there is an interesting story for each of Hugh’s pictures and the Apollo 9 photographs are no exception.  What makes this set of images interesting is what’s not there. There are no pictures of Apollo 9 blasting off, instead there are seven slides of a NASA news conference. 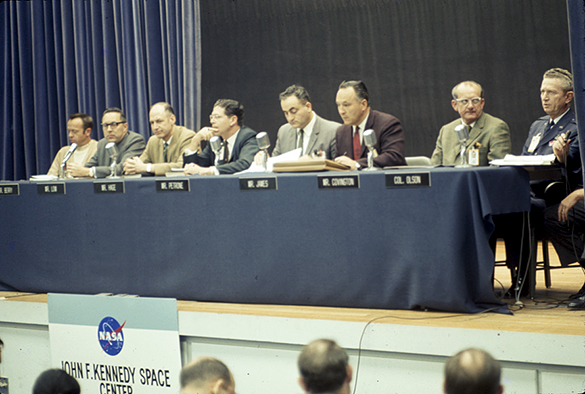 Prominent in Hugh’s news conference images, is Alan Shepard (far left in the photograph above), America’s first astronaut who, in 1969, was head of the astronaut office.  Also, at the new conference desk is Dr. Charles A. Berry (on Shepard’s left), medical director of the US space program and Dr. George E. Mueller, NASA Associate Director of Manned Spaceflight. (There is no name plate for Mueller, so he might be the person holding the microphone, but hidden behind the curtain on the far right).

Dr. Berry, in explaining the delay, said:  “I could guarantee that we would have three sick crewmen on our hands if we launched.”  Dr, Mueller added, “We’d like to launch them when they are well. If there’s any question. I’d rather wait.”

The February 28th launch delay of Apollo 9 was the first time after 18 US man-in-space flights that a launch had been delayed due to crew illness rather than technical issues, and it was “a difficult decision to make,” Berry said.

So, one possible reason for no Morton Apollo 9 launch pictures is that Hugh and Julia got caught up in that delay and were not able to stay through the weekend for the Monday morning launch. 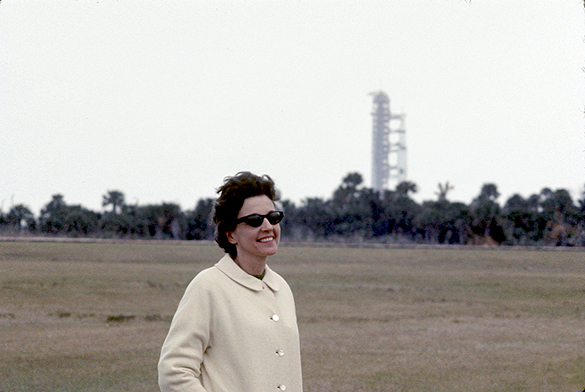 One thought on “Spider, Gumdrop, and the "Morton Mystery" of Apollo 9”