In mid September 1971, the North Carolina Democratic Party held a fundraising event called “The Governor’s Down-East Jamboree” in Atlantic Beach.  Hugh Morton took the above informal group portrait during that event.  I wanted to know more about this photograph, and it turns out there was a bit more happening at Bogue Banks than this single photograph suggests.  As it was, Morton attended the political gathering for a reason beyond making photographs—and the story serves as a good case study on how and why one should always look beyond the online photographs to the entire Morton collection when researching.

Searching through the Morton collection finding aid for “jamboree,” I found listings for six black-and-white negatives made by Morton: five using a 35mm camera, and one using a 120 format camera (which produces a 2″ x 2″ negative).  Morton printed the above photograph from frame 18 of the strips of 35mm negatives; the single 120 negative is a slightly underexposed version of the same group from a different angle.

Here’s a question for our regular readers: Doesn’t *only* six negatives from an event like this seem well, un-Morton-like? That’s what I thought!  It was time to go into research mode!
I knew two things going in:

Morton published the album-like booklet as a keepsake in 1971.  On its opening page is a letter from Morton written to “My Fellow North Carolinian” that includes the sentence, “Regardless of how the 1972 Gubernatorial field finally shapes up, I am confident that no candidate will have a more intense or more consistent interest in the Democratic Party.”  Morton’s clearly writes as if he is a candidate, so he likely published the pamphlet in December.  In addition to the photograph above, there are two other images from the political jamboree including the following image.

The Carteret County News-Times provides a lead-in to the event.  The newspaper reported on September 13th that the Governor’s Down East Jamboree would begin on Friday the 17th with a golf outing, followed by a clambake that evening.  Festivities would take place at John Yancey Convention Center (which was located on Salter Path Road at milepost 5 1/2 and later known as the Royal Pavilion after a renovation project).  On Saturday evening there would be a luau-themed $50-a-plate fundraiser—which explains the leis worn by L. H. Fountain and Howard Lee in the above photograph.  Maryland’s Governor Marvin Mandel would be the featured speaker.  With 400 tickets sold to that point, the expected crowd was 550 people.

The following Monday’s issue of the Carteret County News-Times provides the following:

Well that might explain the relative scarcity of Morton photographs at the event: he attended as a candidate, not a photographer—two and a half months before his official announcement on December 1, 1971—but that is not the reason.

The News-Times ran several photographs with its report. One is captioned:

The caption of a second photograph is more revealing . . .

Hugh Morton, standing in front of the Cape Lookout lighthouse, hosted a picnic Saturday at the Cape.  He commented that if he is elected governor and if the Cape Lookout National Seashore isn’t a reality at the end of his administration, he and his administration will be entirely to blame.  Others pictured are Roy Parker, left, and Arthur Johnsey, Greensboro, and Mrs. Morton.

. . . especially when paired with the following text from the article, which gives us another clue:

MR. MORTON FLEW a party of 25 persons to Cape Lookout in his helicopter for a Saturday afternoon picnic.

So maybe there are more photographs of the event, but filed under Cape Lookout in the North Carolina places series?  Back to the collection’s finding aid, where searching for “Cape Lookout” I found:

Notice that there is no reference to the “Down-East” gathering associated with the Cape Lookout negatives, so the logical place to file them was by location.  And guess what? The Bob Scott negative shown above wasn’t filed by the event either; that negative is filed with other negatives related to Scott that Morton gathered in one place for consideration when producing the book, Making a Difference in North Carolina. These are two examples of why you should think broadly when using the Morton collection: negatives from the same event are filed in three different places, and maybe more.
Here are three scans made from the Cape Lookout negatives: 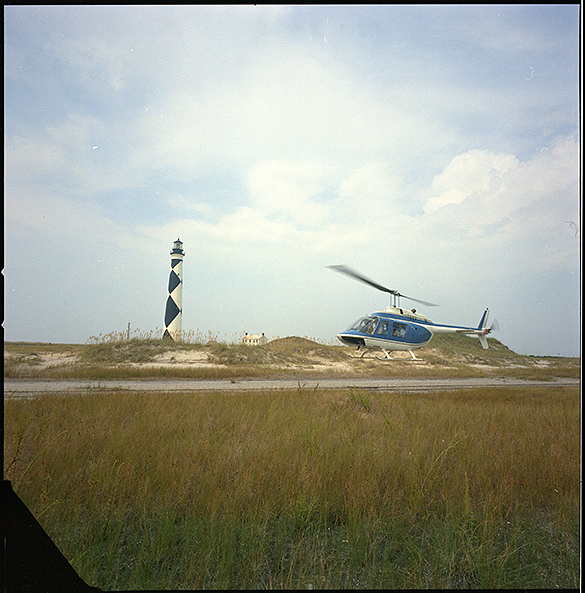 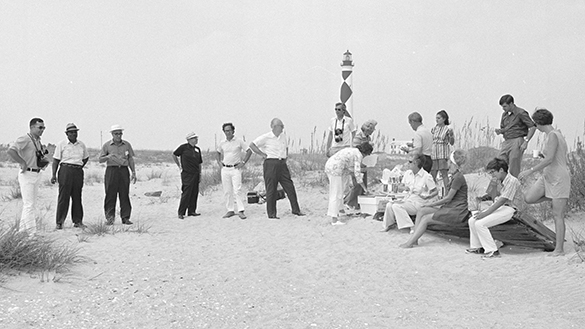 In a few of the frames there is a person on the beach who wears a boater-style “Morton For Governor” straw hat (third from the left in the above photograph).  Another Hugh Morton mystery solved . . . one I didn’t know we had before working on this blog post.

Turning to other newspapers, however, helped to fill in the “Down-East” story.  The Wilmington Morning Star surprisingly did not cover the nearby event, especially given that is Morton’s hometown.

Howard Covington, writing for the Charlotte Observer‘s Piedmont Edition on September 18th provided context for the event.  The jamboree, he wrote, “is the unofficial opening of the 1972 political season and the first half of a fund-raising effort that will close next month in Asheville with the annual Vance-Aycock party dinner.”

So Morton nor any of the other “hopefuls” were official candidates during the jamboree, but a potential candidate.  This was true for the other participating “candidates” as well, and explains why Morton’s official announcement came several weeks later.

Roy Parker, Jr.’s column for Raleigh’s News and Observer for September 20th had the best photograph of the Cape Lookout picnic, made by Ken Cooke, which showed the Mortons and some of their supporters on the beach, while the helicopter flies behind them with the lighthouse in the distance.
That day’s News and Observer column “Under the Dome” noted:

Hugh Morton, the Grandfather Mountain owner who is preparing to seek the Democratic nomination for governor, has other candidates somewhat green with envy because of his close ties with North Carolina news media.

Morton is acknowledged to be one of the state’s most effective public relations men, a photographer of note whose pictures are ubiquitous in travel literature and on postcards, and a familiar figure in scores of weekly newspapers offices, city rooms and station studios.

And by being owner of a famous resort like Grandfather Mountain Golf and Country Club, Morton doesn’t even have to go to the media—they come to him.

For instance, North Carolina members of the American Society of Newspaper Editors are scheduled to gather at the resort in early October.

That includes just about every editor of the major dailies in the state, as well as many from the smaller regional newspapers.

C. A. (Pete) McKnight, editor of the Charlotte Observer and current national ASNE president, has informed his colleagues that he will host a cookout at the affair, and that Morton will be glad to arrange accommodations.

Looks like it may be time to comb through the collection finding aid a bit more . . . . maybe looking for “Vance-Aycock,” “Asheville,” and “news editors?”