As you might expect, Hugh Morton was there.  He was located stage left, slightly elevated and slightly forward of the podium—either seated in the audience just behind the press photographers platform or on the platform behind the television cameras.  He photographed using 35mm cameras loaded with black-and-white negative and color slide films, and was switching lenses.  Two of Morton’s color images appear in the book Making a Difference in North Carolina; those two original slides, however, are not in the Morton collection.
Several of the black-and-white negative frames are double exposures, but it’s difficult to say if they were intentional or accidental.  Broken sprocket holes on the film suggest Morton experienced a camera failure during the event. Below is one of the double exposures that produced an interesting result: Nixon and Graham’s sculpted face (from an unveiled historical marker) appear to be looking at each other. 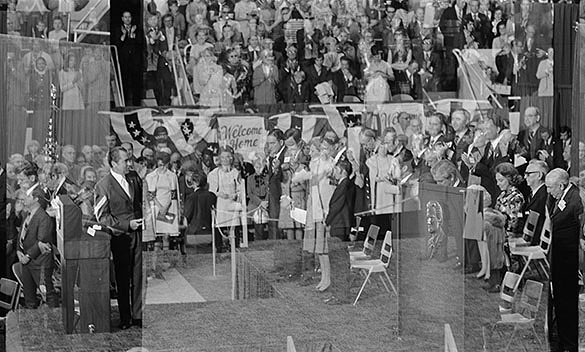 5 thoughts on “Nixon and Graham though the voice of Haldeman”