Happy New Year from “A View to Hugh.”  On the Heels of last week’s post that included mention of SMU standout running back Doak Waker, Jack Hilliard recounts some additional Justice–Walker memories from 1950.  For some perspective, I added the excerpts from The State, and some tidbits found while looking for any use of the photographs.


When UNC played Wake Forest on October 15, 1949 my dad and I were there. We arrived in Chapel Hill about 10 o’clock on that Saturday morning and visited on Franklin Street as we always liked to do. We stopped by The Varsity Shop at 149 East Franklin.  In those days as I recall, they offered three different UNC T-shirts: one with the University logo, one that said UNC Class of 19??, and one with a Charlie Justice image that included Art Weiner, Walt Pupa, and Hosea Rodgers.  The shirts were white with Carolina blue lettering, a major contrast to the hundreds of designs today at Johnny T-shirt, Chapel Hill Sportswear, or the Shrunken Head, among others on today’s Franklin Street.  As I stood looking at the Justice shirt, my dad said “I’ll talk to Santa about one of those.”  He must have, because on Christmas morning I got one.
As the 1949 season came to a close, Justice with his brother Jack along with his good friend SMU All America Doak Walker, partnered with former Greensboro businessman George Edwards, who was president of Quality Textiles in Greenville, South Carolina, to take that T-shirt idea across North Carolina and Texas.  Both Justice and Walker were triple-threat tailbacks—Justice in Coach Carl Snavely’s single wing, and Walker in Coach Matty Bell’s double wing.  The white T-shirts came in three designs: running, passing, and kicking, with Carolina blue lettering for Charlie and SMU red lettering for Doak. 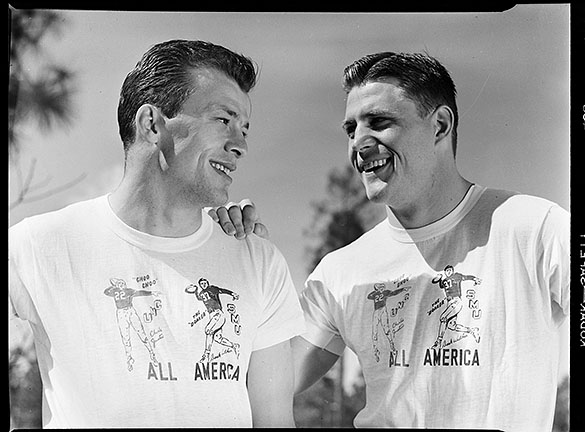 Hugh Morton was hired to take publicity pictures.  Morton and Justice had been friends for a long time, and Justice and Walker had become friends while on several All America teams in ’48 and ’49.  Morton always included one of the T-shirt shots in his slide shows.
Following the ’49 bowl season, the two Saturday heroes started a series of personal appearance autograph parties. They were very careful not to enter into any kind of business venture until they had finished their college playing careers and were no longer under NCAA regulations.
Justice made his first stop at Meyer’s Department Store in downtown Greensboro on Monday January 9, 1950, one week after leading UNC in the 1950 Cotton Bowl in Dallas, and two days after leading the South team to victory over Walker’s North team in the first annual Senior Bowl played in Jacksonville, Florida.  Charlie and Sarah arrived at the store about 2:15 for the 2:30 signing party.  There was already a line.  As Charlie began to sign the shirts, the line grew longer and by 3:30 with the school kids out of class, the line stretched out the door and down the sidewalk.  By 4:30, the sidewalk was filled as far as one could see and overflowed into Elm Street.  At 5:00 o’clock an estimated crowd between 2,500 and 3,000 people that were either in line or had been through the line since 2:15. Justice had worn out 6 pens signing his name. It was at this point that the Greensboro Police Department had to be called in.  I didn’t even get close to Charlie that day, but I did get a shirt which I still have.  Finally, at 5:30, they cleared the store and locked the doors.  The store created a mail order form and advertised it in the Greensboro Daily News. (No web sites in those days). The shirts sold for one dollar each and the postage was fifteen cents.
A headline in the Greensboro Daily News the next morning read, “Choo Choo Mobbed by Adoring Fans.” A front page, four-column story by Daily News staff writer Larry Hirsch was accompanied by two pictures, one of which was titled “The Meyer’s Bowl.” There is also a picture of the Greensboro signing party in the 1958 Bob Quincy–Julian Scheer book Choo Choo: The Charlie Justice Story.  In a 1984 interview Justice recalled, “I had hoped to sign a few autographs and help Ken Blair, manager over at Meyer’s sell a few T-shirts.”

Two days later, on January 11, Justice was at the J. C. Penney Company in Burlington for another autograph party—a party that was documented by Morton photographic contemporary Edward J. McCauley and his images from that day are also in the North Carolina Collection at UNC.  Woody Durham, the “Voice of the Tar Heels,” likes to tell about being at that party in Burlington.

In the 14 January 1950 issue of The State, the magazine’s editorial staff asked readers for nominations for their “North Carolina’s Man of the Year” award for 1949.  They wrote,

Pick out some man and then weigh him in the balance.  Compare the good things he has done with others that might not be so good.  Decide whether he has been an influence for those things which tend to promote the welfare of North Carolina and its people.  It is on that basis that the selection should be made.

Two weeks later, the January 28th issue of the The State hit magazine racks and mail boxes across North Carolina.  On the cover: the Charlie Justice family, photographed by Hugh Morton. 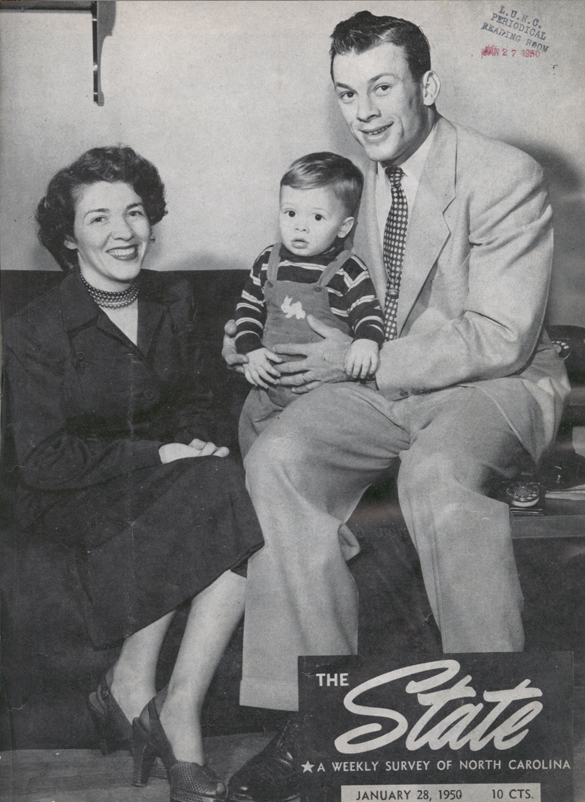 Inside the magazine, editors noted that Justice and Governor W. Kerr Scott received the most mention from readers.  The editors expounded on their selection of Justice (which you can read in its entirety by clicking on the magazine cover above):

. . . there are two major classes of people in North Carolina—the young and the old.  Both are important.  Perhaps the young are more important because they still have the major portion of their lives ahead of them.  Charlie Justice has been an inspiration to many thousands of boys and girls in North Carolina.  You’d be surprised to know how many of them keep scrap-books about him.  They actually swap pictures, just as we used to swap cigarette pictures fifty years or so ago.

Summarizing they listed their reasons for their selection:

A few days after the Man-of-the-Year issue of The State, on February 3rd, Justice attended another autograph party, this one at Belk-Tyler’s in Rocky Mount.
A bit later in 1950, Doak Walker was having similar successful autograph parties in the Dallas–Fort Worth area of Texas.  On April 14, 1950, he appeared on the evening news on KBTV, Channel 8 in Dallas promoting his autograph party at Titche-Goettinger the following day. The store also set up a mail order and phone-in ad in the Dallas Morning News. A. Harris & Company set up a mail-order blank for the shirts in the “News” as well.  The Robert I. Cohen department store place an advertisement in the April 15th edition of the Galveston Daily News that read, “Hey Fellas, (gals, too) Be the first in your gang to wear a DOAK WALKER TEE SHIRT $1.” The advertisement gave a description of the three pictures styles, included a drawing of a lad wearing the running shirt and a note that “Phone and Mail Orders Accepted”—plus an announcement they would be giving away ten autographed footballs when “The Doaker will be here personally for an autograph party Saturday, April 19th.  Don’t miss him.”  Another advertisement with a drawing of a kid wearing the passing T-shirt ran in the 23rd issue of the newspaper.  Several weeks later, a May 27th Cohen advertisement for a one-day, end-of-the-month clearance sale priced the T-shirts at 88¢.
It not clear how widely Morton’s photographs were used for publicity.  I have pasted in one of my Charlie Justice scrapbooks, a newspaper picture of the Morton image that shows both wearing the shirt with both player pictures and the caption reads:

Two pals certain to succeed when their classes graduate in June are Charlie Justice left the Carolina All America, and Doak Walker right SMU’s All America. They’ve already gone into business for themselves as witness the shirts. They plan a personal appearance tour together after graduation.

I can’t tell which newspaper or the date of the clipping. Likely it would have been The Greensboro Daily News, sometime after January 2nd and before June of 1950.  I don’t believe the joint tour took place because it was scheduled to begin after Carolina’s final regular season game with Virginia on November 26th, but since they got the ’50 Cotton Bowl bid, the joint tour was canceled. I don’t believe it was ever rescheduled. Surveying various Texas and North Carolina newspapers for 1950 that are available online did not yield an answer.
The Justice jerseys were available into the following football season, too.  Quality Textiles placed advertisements in game-day programs that listed stores in North Carolina and Virginia that sold the shirts.  Rather than using the Justice/Walker photographs, the ad used photograph of a young boy and girl holding hands while wearing Justice jerseys.  The photograph shows that the manufacturer also made a long sleeve polo shirt, which may explain why they choose to make different image.
Thirty-four years after the T-shirt’s debut, in August of 1984, I was assigned to direct a Charlie Justice documentary produced by Winston-Salem TV producer David Solomon.  (Many may remember Solomon as having worked with Hugh Morton on the 1994 PBS documentary The Search for Clean Air.) As part of the promotion campaign for the Justice program, the 1949 Choo Choo T-shirt was replicated and given to the media to promote the program, “All the Way Choo Choo.”  This time I got Charlie to autograph my shirt.