On September 23, 1942—the first day of classes at UNC—when students picked up their copies of The Daily Tar Heel they would see the headline “Wartime Carolina Opens Doors on 149th Year.”  As they scanned down the page they would also read another headline: “Morton, Yackety Yack Head, Leaves Post for US Army.”  In the spring elections, students had voted Morton to be the editor of their yearbook; now Morton was “the first case of a student entering the army forces to hit Carolina publications.”  Last year’s Veterans Day post took a brief look at that DTH article, his draft registration card, and information about his enlistment on October 5.
Before leaving for the South Pacific, Morton was primarily stationed at Camp Davis near Wilmington.  The Army assigned Morton to the antiaircraft artillery school photography lab.  Morton’s photography managed to find its way into a new publication: The AAA Barrage, the camp’s newspaper.  Most photographers did not receive credit for images that appeared in The AAA Barrage.  At most, the paper identified the military unit in a credit line.  Here’s one example of a possible unaccredited Morton photograph:

Those of you who have been to the Hugh Morton retrospective exhibition might recognize the photograph above, where the person depicted is not identified.  Actually it is not the exact same image, but it’s a variant.  In the course of putting together this blog post I found this photograph in The AAA Barrage.  Here’s how we printed a very similar negative for the exhibition: 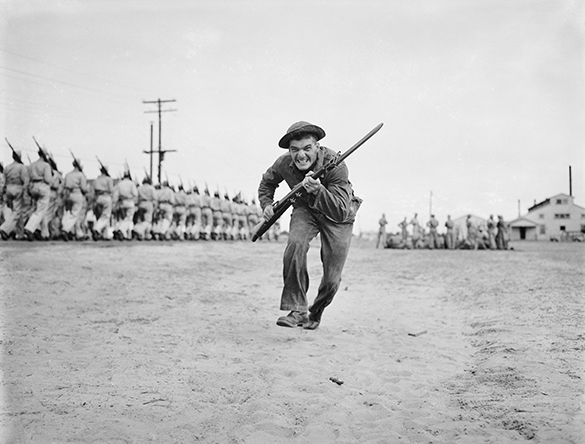 The good news is that even if the published image was by another photographer standing next to Morton, we now know the soldier’s name: Vic Costello, former All America football player at Auburn.
Morton’s spectacular photograph during a nighttime firing of an anti-aircraft gun, however, merited acknowledgment.  One of Morton’s assignments at Camp Davis was to cover a night training exercise of the First Composite British Antiaircraft battery.  A unit of about 400 British troops toured American army bases, the first (and longest) being at Camp Davis.  They arrived in mid July 1943.  An article in The AAA Barrage noted that the purpose of their trip was “not so much to display British equipment with which the American Army is familiar, as to demonstrate the methods adopted in the British Army of training, of drill and of tactical employment.”  One of Morton’s photographs appeared with credit in the caption in the August 7, 1943 edition of The AAA Barrage. 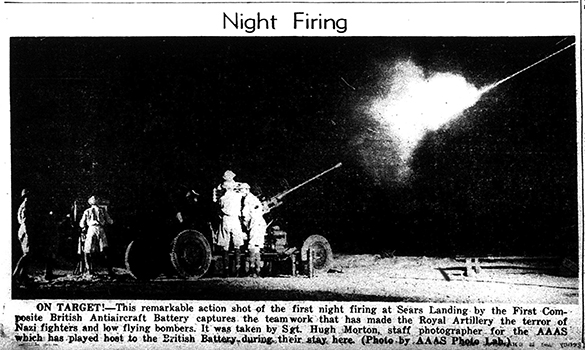