If I were to write a short story about this afternoon, I would title it “A Tale of Two Sweaters.”
Arnold Palmer, Wake Forest’s finest golfer who also was one of the game’s greatest players, course designers, and ambassadors, died yesterday.  Earlier today, the Wilson Library reference staff received a request from a Wilmington media outlet for two images from the online collection of images of Palmer at the Azalea Open.  Both images had dates of 31 March 1957; one scan came from a negative (cropped by the author) . . . 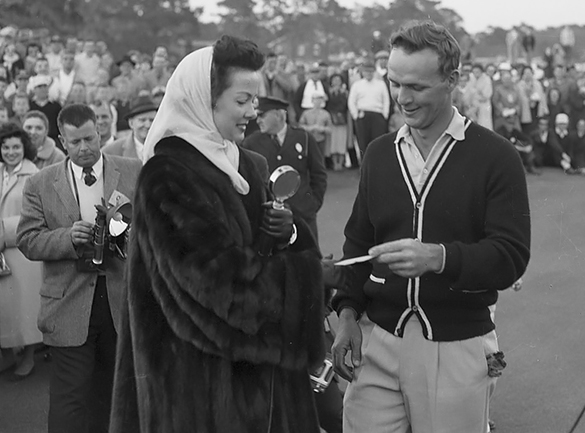 the other (below) from a print with no identifying information on its back. 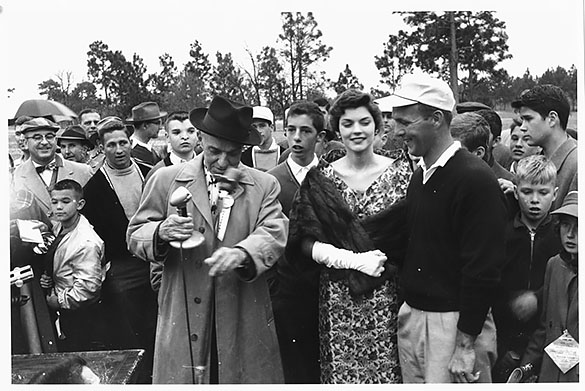 I quickly noticed that Palmer was not wearing the same sweater in both images, and that the women were also wearing different clothes.  A bit of digging in newspapers on microfilm and online, plus a check with other Morton negatives that are not online (including the scan at the beginning of this post) led to the discovery that the first of these two images was correctly identified.  It depicts the check presentation from Azalea Festival Queen Kathryn Grayson to Palmer after he won the 1957 open, but Morton made the latter after the 1958 tournament.
Here’s is the short storyline for the 1958 Azalea Open finale: Arnold Palmer was the defending champion, but finished second to Howie Johnson after losing a playoff round by one stroke. Palmer and Johnson were reportedly very good friends at the the time.  The following week, Palmer won his first Masters Tournament in Augusta, Georgia.
Ironically, Palmer and Johnson died almost exactly one year apart: Howie Johnson died September 21, 2015.