In our previous post, Jack Hilliard recounted President Harry S. Truman’s participation in the groundbreaking ceremonies for the Winston-Salem campus of Wake Forest College.  We used the photograph below was to illustrate the story, and I mentioned in a parenthetical statement that we would look more closely at the subject in our next post.  On this day with a presidential visit to Chapel Hill, I hereby fulfill my campaign promise. 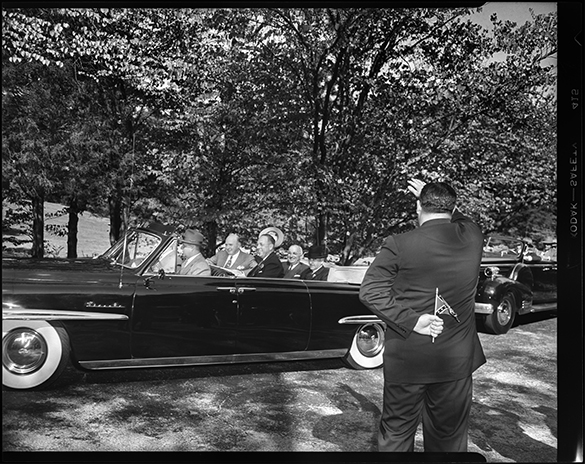 Seven weeks after President Harry S. Truman visited Winston-Salem for the groundbreaking ceremony for Wake Forest College on October 15, 1951, LIFE published a tightly cropped version (see below) of the Hugh Morton photograph shown above in its December 3, 1951 issue.  Morton’s photograph accompanied photographs by other photographers in an article titled, “Warmed Over Again: Politicians turn the Dixie flag into a Sour Gag.”  The brief article paired two other photographs depicting the Confederate flag used in the design of a necktie worn by Alabama Senator Harry Byrd, and as a conductor’s baton in the hand of Atlanta mayor William Hartford directing the city’s symphony playing Dixie.  LIFE published “Warmed Over Again” in a Sequel column as a follow-up to its 15 October article, “The Flag, Suh!”
LIFE‘s caption for Morton’s photograph reads, “DUCKING HIS FLAG behind his back, bystander waves loyally at Harry Truman when the latter’s car passes him on its way to Winston-Salem, N.C.” The photograph illustrated a one-paragraph story which concluded with the sentence, “But in Winston-Salem, N.C. one flag waver felt suddenly silly enough to hide the rebel banner when his president passed by.”  On face value that is was appears to be happening.  Can Morton’s other negatives made during Truman’s visit provide some additional insight?  First, some background . . .


LIFE‘s The Flag, Suh!”—a one-paragraph article with the subtitle “Confederacy’s banner reaches a new popularity”—stated that “the Confederate Flag last week was enjoying a renascence.”  As examples, the magazine published eight photographs depicting the Confederate flag, including

The article surmised, “Some interpret all this as an anti-Truman gesture, others possibly more intellectual as a revival in states’ rights.  Most people, however, recognized a fad when they saw one.”
News reporters describing the president’s visit to Winston-Salem offered several nuggets of evidence that give credence to LIFE’s anti-Truman interpretation.  Under the headline, “Confederate Flags Furnish Off Note In Truman Visit,” W. C. Burton, staff writer for the Greensboro Daily Record, described the scene along the presidential route from the airport to Reynolda where the presidential luncheon was to be held:

Crowds lined both sides of the cavalcade’s route through Winston-Salem and the people were is such high spirits that some of them cheered the press busses.  Several of the spectators waved small ten-cent-store United States flags.  A small rebellious, but hardly subversive and probably waggish note, was observed in the Confederate flags which not a few of the onlookers waved.  It may or may not be significant that as the procession moved into the residential section of the better heeled the number of Dixie banners increased.  In any case the secret service men made no move and a hawker who was peddling the Confederate flags admitted that business was not exactly booming.

The Associated Press correspondent assigned to cover Truman, Ernest B. Vaccaro, wrote two articles covering Truman’s trip.  In one, Vaccaro observed that, “Many of the school children along the president’s route waved American flags, but here and there were some Confedete flags.”  Other reporters also took note.  Simmons Fentress of Raleigh’s News and Observer‘s wrote, “There were children by the scores and there were little Confederate flags, dozens of them.  One boy, in a high school band uniform, waved his flag vigorously and shouted, as the cars would pass: ‘The South will rise again.'”  Fentress also wrote, “At one point probably a hundred children were collected.  Perhaps 25 of them had little American flags.  Perhaps 35 of them had little Confederate flags.”
Marjorie Hunter of the Winston-Salem Journal, describing the crowd along the road to Reynolda wrote, “Hundreds of persons waved United States flags as the presidential car passed by.  A few jumped up and down with Confederate flags in their hands.”  Bob Barnard, also with the Winston-Salem Journal described many onlookers including “several little girls waving Confederate flags.”  United Press correspondent Merriman Smith mentioned that “Children and adults waved flags at [Truman’s] car—many of them Confederate banners.”
On a similar note, the Statesville Daily Record recounted the efforts of two young boys who wanted to meet Truman despite the “tight cordon about the President’s party, not allowing anyone to get too close.”  One lad, Charlie Wineberry, “dashed up to the president, proudly wearing his Confederate cap and got a nice handshake from the chief executive.  However, he turned down an offer by newsreel cameramen for a picture with Charlie and the Confederate cap.”
Not limited to the parade route, Confederate flags made their way to the dedication ceremony, too.  The Charlotte Observer noted that “Confederate flags as well as the Stars and Stripes were flying around the grandstand from which President Truman made his address.”  Only United States flags, however, can been seen in Morton’s negative depicting an overview scene of the platform (shown in the previous post).  Perhaps Durham Morning Herald reporter Russell Brantley’s picturing the scene explains it better:

The President, stocky and natty in a double-breasted blue suit, had nothing to say about past squabbles with Southern Democrats over civil rights.  And an estimated crowd of 20,000, many of them Baptists and a number of them sporting Confederate flags, responded with enthusiasm.

Additionally, certain versions of an Associated Press article include a sentence that begins, “The president told the crowd, dozens of whom carried Confederate flags, . . .” So perhaps it was in the grandstands were where the crowd sat, not where the president stood, where the Confederate flags flew.
Does Brantley’e description also shed light on why there were so many Confederate flags that day, namely a displeasure with Truman’s efforts to ensure civil rights for all citizens?  Among Truman’s initial undertakings to this end was the establishment, by Executive Order 9808, of the President’s Committee on Civil Rights in 1946.  The committee had a North Carolina touchstone: Frank Porter Graham, the first president of the consolidated University of North Carolina from 1930 until Truman appointed him to be a member of the committee.  In 1949 Governor W. Kerr Scott, a pro-Truman Democrat (pictured in the photograph above seated next to the president), appointed Graham to complete the term of United States Senator J. Melville Broughton after he died in office after serving only a few months.  In the 1950 race for the seat, Graham lost a primary runoff election to anti-Truman Democrat Willis Smith that was tinged with anti-segrationist sentiments from Smith’s supporters.
Returning to the Morton collection, what else did Hugh Morton photograph that day?  In the collection there are four negatives depicting a man holding a Confederate flag behind his back while waving or possibly saluting Truman.  Morton labeled two of these negatives; both include the name “J. D. Fitz” and “Confederate Flag.”  In addition to the motorcade negative shown above, Morton made three exposures at the airport, similarly posed, one of which is below.


Did Morton encounter this scene, too, with the same person at two different locations?  From the news articles we know this man wasn’t the only person carrying a Confederate flag that day.  Considering Morton’s labeling of the negatives, the “flag waver” mentioned in the LIFE caption is likely J. D. Fitz.  The existence of that many negatives suggests that Morton either preplanned these photographs, encountered Fitz during the event and then staged the similar scenes, or followed Fitz to two locations and then photographed Fitz and his antics.
And who is J. D. Fitz?  I have only a few clues thus far, based upon a United States Census search. In the 1940 census, there is a John D. Fitz, age 24, who lived in Shelby, North Carolina with wife Lina or Lena, who stated his occupation was “Sports Editor” for a “Daily Newspaper.”  The census also provides Fitz’s 1935 residence as Reidsville in Rockingham County.  The Shelby city directory for 1939-1940 lists a “Fitz Jos D (Lena T)” as sports editor for the Shelby Daily Star, but he is not listed in the previous or subsequent Shelby directories.  There is a “Fitz Jos D” listed as a clerk at Kroger Grocery & Baking Co. in 1932 Reidsville city directory, and again as a clerk at Piggly Wiggly in Reidsville’s 1935 city directory.  Given Morton’s love of sports and sports photography, did he know Fitz?
There are two other clues to consider.  In the above photograph, note the reporter-style notebook in the left pocket of the man on the right. Was he also a reporter?  And finally, notice the box at his feet. Could that have been Morton’s camera box?
Are there other possibilities?  What do you think?