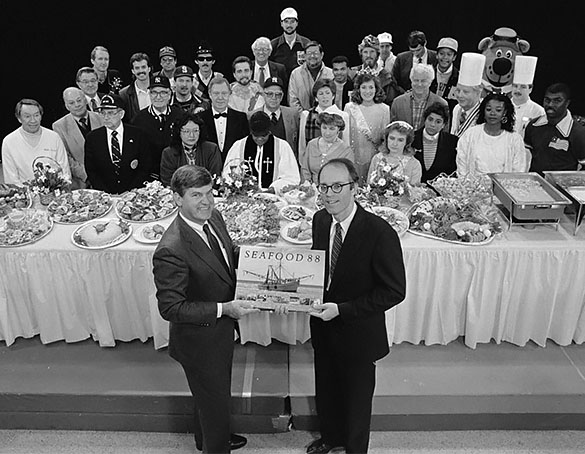 Twenty-nine years ago the North Carolina coastal fishing and tourist industries faced a very real problem.  As most often is the case, the Hugh Morton family stepped in to offer help. Morton collection volunteer and blog contributor Jack Hilliard looks back to January, 1988 and a unique gathering of loyal North Carolinians.
First, a little history . . .
In August 1987 off the coast of Naples, Florida, microscopic algae began to reproduce at a rapid rate, thriving and expanding in a matter of days into a large toxic bloom that dominated the Florida coastal environment.  Two months later that same organism, Ptychodiscus brevis, had spread to the North Carolina coast—closing 170 miles of coastal fishing waters and affecting 9,000 commercial fishermen.  North Carolina had never had a toxic algae bloom.  In fact a toxic bloom had never been seen north of Jacksonville, Florida, about 800 miles to the south.
At the time, some scientists described the situation as a spreading global epidemic of toxic and nontoxic algae blooms called “red tides.”  North Carolina’s bloom is believed to have traveled north in the Gulf Stream, bypassing other Southern states. Some of those scientists believed the causes of the red tide epidemic likely included climatic changes, natural growth cycles, and man-made pollution among others.  Other scientists remained unconvinced.  “I wouldn’t want to come down and say pollution is causing red tide expansions,” said Daniel Kamykowski, a professor of oceanography at the University of North Carolina. “I don’t think pollution is that well defined in terms of the cause of red tides.”
At this point it should be pointed out that commercial seafood found in restaurants and grocery stores is safe because it comes from red tide-free-water and is monitored by the U.S. government for safe use.  That being said, in early 1988, North Carolinians were skeptical: they were not eating fish, and that was hurting the coastal fishing and tourist business in at least 600 restaurants, hotels, and seafood markets.  At the time, Hugh Morton, Jr. was the Director of the North Carolina Division of Travel and Tourism, having been in that position since March of 1987.
When there was a North Carolina concern that needed attention, Hugh Morton, Jr., like his father, was always ready to help.  So in early January, 1988, along with the North Carolina Association of Broadcasters, Morton and Governor Jim Martin launched a campaign to aid the fishing and tourism industries that were facing the red tide scare.


On January 6, 1988, Governor Martin and Hugh, Jr. staged a seafood feast at the Governor’s mansion in Raleigh. The invited guest list read like a who’s who in the Tar Heel state: Jesse Haddock, Bill Friday, Kay Yow, George Hamilton IV, Captain Frank Conlon, Kyle and Richard Petty, Clyde King, Loonis McGlohon, Charlie Justice, Shirley Caesar, Bones McKinney, Tommy Amaker, Tommy Burleson, Miss North Carolina Seafood Evonne Carawan of Morehead City, Bob Timberlake, Bobby Jones, and Phil Ford, plus a variety of costumed characters from a variety of state travel attractions, like Daniel Boone (portrayed by Glenn Causey.)  In all, more than thirty loyal North Carolinians participated.
They all ate North Carolina seafood, and Hugh, Jr. put to work his advertising agency skills and produced a number of TV public service announcements using this impressive group of North Carolina legends. Hugh Morton, Sr., as would be expected, was there with camera in hand.  In his 2003 book, Hugh Morton’s North Carolina, he called the group “one of the most impressive groups of celebrities ever gathered in the state.”  Some of the celebrities shared their own seafood recipes, like “Richard Petty’s Favorite Crabmeat Casserole,” and “George Hamilton IV’s Favorite Scallops and Shrimp.”  Both of these favorite recipes appeared in the March, 1988 issue of The State (now Our State).

According to the Saturday, January 9 Wilmington Morning Star, the campaign was to begin on Monday.  I recall vividly the day the reel of two-inch videotape announcements arrived at the WFMY-TV studio in Greensboro.  One of my duties at the time was to pre-screen all incoming video material.  The spots were magnificent.  We were pleased to air them in the Greensboro, High Point, and Winston-Salem television market.  A letter enclosed with the videotape from Wade Hargrove, Executive Director of the North Carolina Association of Broadcasters explained the purpose for the TV project:

These announcements come at a time when the seafood industry (which is very important to the state’s economic health) has been hit hard by the “red tide” along the coast. Unfortunately, despite the best efforts of everyone, there seems to be a widespread misconception that the red tide has had an adverse effect on the state’s fish and shrimp industry—which is not the case. . . These PSAs are designed to clear up that misconception in a positive, upbeat way.


In the weeks and months that followed, seafood consumption began the long road to recovery.  Jesse Jackson visited Wilmington for four hours on January 27 during his presidential campaign, “focusing on the economic plight of shell fishermen,” according to Janet Olsen, staff writer for the Wilmington Morning Star.  On February 2 Governor Martin launched “Operation Red Tide,” a $120,000 relief fund for those fishermen who suffered losses during the epidemic. She reported that the red tide “put almost 11,000 commercial fishermen out of work in North Carolina.”  On February 12 Bryson Jenkins, Public Information Spokeswoman with the North Carolina Division of Environmental Management, announced that algae counts were at 5,000 cells per liter, down from “hundreds of thousands.”