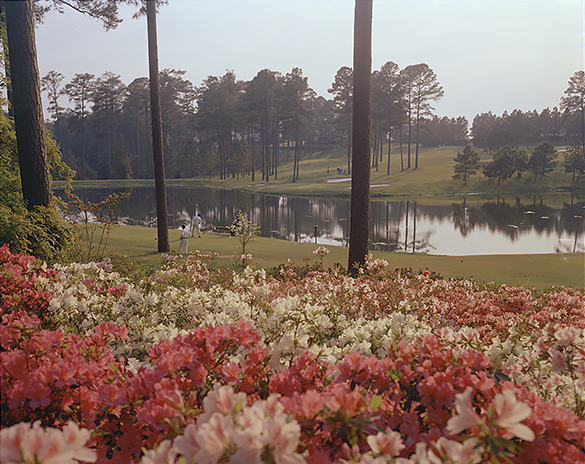 Yesterday while looking through Sheet Film Box P081/C-24 in the Hugh Morton collection, I came across the above color negative labeled “Augusta Nat’l for John Wms.”  Today, coincidentally, is the opening round of the Masters Tournament, so I had the negative digitized for posting on A View to Hugh.  Turning to the finding aid to see what additional material on Augusta National might be in the collection, I found the following:
Roll Film Box P081/35C-6

Some of the images depict a foursome and others playing the course; many other negatives are scenic views.  The images didn’t seem to merit scanning them all just to select a few to use for the blog, but if anyone is ever looking for images of the Augusta National circa 1971 (the 35mm negatives are labeled Spring 1971 but the reaming dates are estimates), you may aways request to see them or have them digitized.  One of the negatives, however, depicted a gentleman sitting outside a door with the nameplate “John H. Williams.” 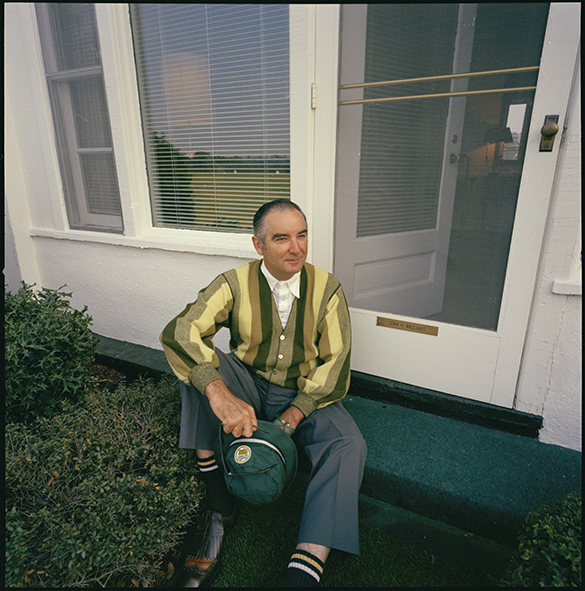 So two question remained: Who is John Williams and what is his connection to Hugh Morton? According to his obituary from May 2013, Williams “was recognized nationally as one of the great financial minds and deal-makers in America during the 1960s and 1970s.”    The portrait of Williams in his obituary looks very much like the man pictured above, so it’s safe to say this is photograph of Williams at Augusta National.
Based in Tulsa, Oklahoma, Williams was co-founder, president, and chief executive officer of The Williams Companies from 1949 to 1971, and chairman and CEO from 1971 to 1979.  When he retired, the company’s assets were $2 billion.  Listed among his many accomplishments and associations: Williams served on the board of Augusta National Golf Club . . . and “Grandfather Golf and Country Club and Linville Golf Club of Linville, NC.”  At the time of his death, Williams and his wife resided in both Tulsa and Linville.  And therein lies his connection to Hugh Morton.  Turning back to the Morton collection finding aid, there are thirty-one entries for John Williams spanning the 1960s through the 1980s.
That’s what I discovered after a little investigation.  Please leave a comment if you would like to add to the story.