NASCAR’s longest race of the season, the Coca-Cola 600, will be run at the Charlotte Motor Speedway on Sunday, May 28, 2017.  This year’s event will mark the 58th running of the race that started back in 1960 when it was called the World 600.  That name continued until the 1985 race when Coca-Cola became a major sponsor.
In 1978 NASCAR held a supporting race, a Late Model Sportsman Series 100-mile race the day before the 600 miler. The following year NASCAR held the Sun Drop 300, and beginning in 1980 the Mello Yello 300.  In 1982 the 300-mile race became part of the Busch Series, with another sponsorship name change to the Winston 300 in 1985.  Today the race is called the Hitense 4K TV 300.
Back on May 7, 2010, Jack Hilliard wrote a post about the North Carolina Sports Hall of Fame, and Hugh Morton’s wife Julia added this comment: “I remember how anxious Hugh was to have Stock Car Racing ‘declared a sport.’”  Four years later, Jack wrote a post about the 1971 National 500 at Charlotte’s famous mile-and-a-half oval.  He wrote in the article that while High Morton is famous for his sports photography, there aren’t many NASCAR events represented in his portfolio.
Fast forward to earlier this year, when Jack noted in the Morton collection finding aid the following entry:

With the 2017 Coca-Cola 600 approaching, Jack wrote an article looking back thirty-four years to the then World 600 of May 29, 1983.  This morning, as I was assembling the image scans and writing captions for the World 600 posting, all was well . . . 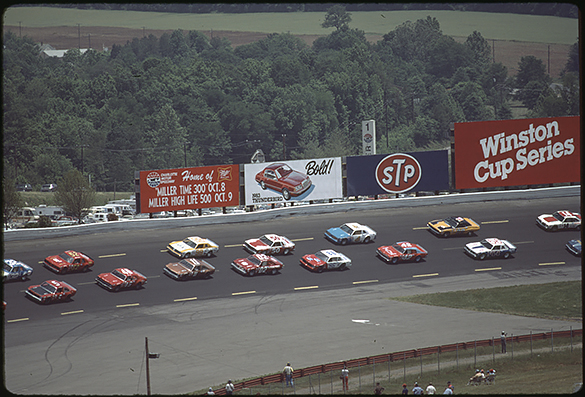 . . . and moved on to the next.
In the World 600, Hueytown, Alabama’s Neil Bonnett edged out Richard Petty by 0.8 seconds for the victory.  Could this image be the two dueling as they came out of the last turn?  Alas, no because the car is yellow and Jack’s article had a quote by Bonnett from after the race:

Richard was dictating how fast I had to run.  I knew I had to pick up the pace because every time I looked in my rear view mirror I saw that red-and-blue car and I knew that man meant business.

Then I placed the following photograph, Morton’s slide #19, and something was awry . . .

The above photograph, Morton’s 35mm color slide #19, depicts a pack of cars exiting turn four with car 23 in front of cars 34, 76, and 5.  To write a caption, I looked up on the Internet and found the race results with a list of the drivers’ names and car numbers.  That’s when I discovered that none of those car numbers raced in the World 600.  Digging a bit more, I learned about the Mello Yello 300 and found a list of drivers and car numbers for that race, then emailed the news and webpage links to Jack.  He found footage of the entire race on YouTube, and by comparing the beginning minutes of the film footage to Morton’s wide angle photograph shown at the top of this post, we confirmed that Morton’s photographs are of the Mello Yello 300 and not the World 600.  The race broadcaster mentions (at 4:20 on the video), “Dale Earnhardt in the Wrangler car, number 15.”  As the results webpage shows, Dale Earnhardt defeated Neil Bonnett to win the Mello Yello 300.
There’s still a little “Morton Mystery” left, though: some of the car numbers seen in slide 19 are unknown.  According to the list on the website Ultimate Racing History, the driver for car number 23 was Davey Allison while Joe Kelly drove the following car, number 34.  The next car, 76, is not listed . . . nor is car 47.  In between those two cars is car 5 driven by John Anderson.  Dale Jarrett is next in car 32, followed by Slick Johnson in car 46.  With two car numbers unaccounted for, is it possible that Hugh Morton attended the qualifying race the day before?  That’s not likely because car number 7 in the second photograph above is probably pole sitter Morgan Shephard. Or, more likely, is the list of drivers on the Internet list incomplete or contain some errors?
That’s what I could piece together this morning before today’s 1:00 starting time.  Any race fans out there who can add more to the story?
Addendum: May 28, 2017
Jack found a website, Racing-Reference.info, with the results of the 1983 Mello Yello 300 that include cars 76 and 47 driven, respectively, by Butch Lindley and Randy Tissot.
Another “Morton Mystery” (that we didn’t know we had) has been solved!