It’s been 99 years since a comparable solar event of this 2017 magnitude occurred across the United States and it won’t happen again until April 8, 2024. Hugh Morton collection volunteer Jack Hilliard takes a quick look at this current phenomenon and looks back to 1951 when Hugh Morton photographed an event similar to the one we’re celebrating this month.
On Monday, August 21, 2017, all of North America will be treated to an eclipse of the sun. About 200 million people live within a day’s drive of the path of totality where you can see one of nature’s most awe-inspiring sights: a total solar eclipse, a path on our planet where a person may experience the moon completely covering the sun such that the sun’s tenuous atmosphere, the corona, will be visible.  This will be the first total solar eclipse to cross the entire continental United States since June 8, 1918.  The path will cover 8,600 miles from Lincoln Beach, Oregon to Charleston, South Carolina. Observers outside this path will see a partial solar eclipse where the moon will cover only part of the sun’s disk.
The path of totality is a relatively thin ribbon—a little over 70 miles wide (actually 71.5 miles in North Carolina), and will cross the United States from west to east at 1,500 miles per hour.  The first point of contact will be at Lincoln Beach, Oregon at 9:05 a.m. Pacific Daylight Time.  Totality begins there at 10:16 a.m. PDT.  Over the next hour and a half, it will cross through Oregon, Idaho, Wyoming, Montana, Nebraska, Iowa, Kansas, Missouri, Illinois, Kentucky, Tennessee, Georgia, and North and South Carolina. The total eclipse will be visible in nine North Carolina counties: Cherokee, Graham, Swain, Clay, Haywood, Henderson, Macon, Jackson, and Transylvania.  Most everywhere else in the state will experience a partial eclipse of 90 percent or more. The spectacular show will begin in North Carolina at 2:33 pm Eastern Daylight Time.
The path of totality will pass across the western portion of the Great Smoky Mountains National Park, as well as the Brevard, Franklin and Murphy areas of North Carolina. Andrews will see the sun fully eclipsed by the moon for the longest of any city in the Tar Heel state: two minutes and thirty-nine seconds.  The total eclipse will end near Charleston, South Carolina at 2:48 p.m. EDT.  From there the lunar shadow leaves the United States at 4:09 EDT.  Its longest duration will be near Hopkinsville, Kentucky where the sun will be completely covered for two minutes and forty seconds.
This once-in-a lifetime-event would be perfect for photographer Hugh Morton, and he would bring some firsthand solar eclipse experience to the event.  Morton, who over the years had taken thousands of football photographs of his beloved UNC Tar Heels, was not on hand in Chapel Hill on September 1, 1951 when Head Football Coach Carl Snavely’s team first took the practice field to open the ’51 season.  Instead, Morton was atop Linville Peak at Grandfather Mountain. On that day, an annular solar eclipse was to be visible just at sunrise in a 30,000 square mile area of Virginia and North Carolina.  (An annular solar eclipse occurs when the moon’s apparent diameter is smaller than the sun’s blocking most of the Sun’s light causing the Sun to look like a small ring.)

Grandfather Mountain, at 5,964-feet, was the highest point in the United States in the center of that 95-mile-wide annular eclipse path, a perfect spot for Morton and his camera.  Back then, the road did not extend to the top of the mountain, so Morton and about 225 hardy souls made the rugged hike to the top in the early-morning darkness, where they joined about 75 overnight campers. In the predawn hours, low hanging clouds gathered close to the horizon along with a slight wind. The clouds continued to hang around as the 5:51 sunrise time approached. 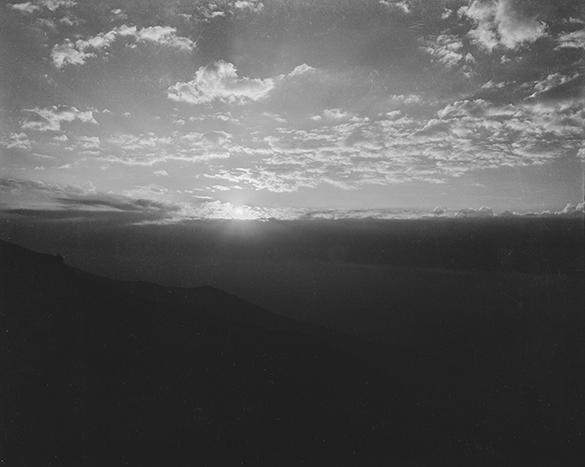 Then, six minutes after sunrise, at 5:57, the clouds broke revealing the moon already in position to make its trek across the sun’s surface. Bailey’s Beads—little flashes of light shining through the rugged valleys and canyons on the moon—became clearly visible. Scientists at the scene called the view “excellent,” even though those thin, light clouds drifted back by from time to time.  Most of the spectators remained until the moon had cleared the sun by 6:20.

Atop nearby towering 6,684-foot Mt. Mitchell, some 200 people viewed the spectacle through a thin layer of high clouds. In Asheville, haze obscured the view for many.  Across the state in Greensboro, folks greeted the first eclipse of this magnitude in 50 years with the moon hiding 96% of the sun’s light.
A cloudy overcast sky spoiled the show for many of the Eastern states. The eclipse would have been visible over virtually all of the United States east of the Mississippi River had it not been for the clouds. Pittsburgh, Boston, and Atlanta reported overcast and clouds that, according to the United Press “eclipsed the eclipse.”  The same weather conditions were reported in New York, but early risers there were able to see the show on their TV sets. WOR-TV had set up a television camera with an 80-inch reflector lens in North Bergen, New Jersey. The lens penetrated the overcast.
Sixty-six years after Morton made his 1951 eclipse images, Grandfather Mountain will once again celebrate the current solar spectacle of Monday, August 21st with a solar eclipse party.
Postscript by Stephen
You may be wondering why there is no mention here of the solar eclipses from the 1970 total eclipse and the 1984 annular eclipse, both of which traversed sizable portions of North Carolina.  There is no listing for either in the Morton collection finding aid, so it took a little exploring to determine the likely reasons. (Note: the two links in this paragraph lead to Google cached webpages depicting maps of the eclipse path.  Just about all Google searches on the NASA website for eclipses other than 2017 annoyingly take you to the NASA webpage for the 2017 eclipse.  There’s no guarantee on how long these links will function properly.)
There are no specific clues about Morton’s whereabouts during the 1970 total eclipse, which made landfall in the United States southeast of Tallahassee near Perry, Florida.  While much of Florida was cloud-covered, here in North Carolina both Fayetteville and Greenville reported perfect viewing conditions . . . as did Virginia Beach, Virginia.  The path of totality only skimmed by Wilmington.  The collection does not have one of Morton’s “executive planners” for 1970, and so we have another “Morton Mystery.”
Regarding the 30 May 1984 eclipse in North Carolina: the weather was clear in the Piedmont but not in the east. Morton’s appointment book places him in Wilmington for a movie shoot and he noted “Heavy Rain – Southpoint, Orton” without mention of eclipse.
An Epilogue
The U.S. Postal Service is issuing the Total Solar Eclipse Forever stamp to commemorate the August 21st event. The image changes when you touch it by transforming into an image of the moon from the heat of your finger.