It’s often useful when researching Hugh Morton images to check his executive planners.  I’ve used examples of this practice before, and for today’s post this tactic provided some insight into one particular journey in March 1987.

Wednesday, March 4: Drive Wash DC with Barrier
One of Morton’s two entries for March 4th reads, “Drive Wash DC with Barrier.”  Henri Smith Barrier Jr. was a member of the UNC class of 1937—just six years ahead of Hugh Morton’s class of 1943—but he received his Bachelor of Arts degree in journalism in 1940 when Morton was a UNC student.  Barrier was sports editor of the Concord Tribune, his hometown newspaper, for two years before he joined the Greensboro Daily News in 1941.  Just six years before this road trip, in 1981, Barrier wrote and edited the book The ACC Basketball Tournament Classic that featured Morton’s photography.  Barrier passed away a little more than two years after this DC journey on 2 June 1989.

Thursday, March 5: “Jesse Helms”
That’s Morton’s plain and simple entry, but why did Morton schedule a photography session with Jesse Helms?  I suspect it was a self-assignment for his collaborative book with Ed Rankin titled Making a Difference in North Carolina. Rankin and Helms were roommates in 1941 when they were newsmen at The News and Observer and The Raleigh Times, respectively.  In 1987 Helms was serving his third term as North Carolina’s senior United States Senator.  The state’s junior senator was Terry Sanford, elected just a few months earlier in November 1986.

The Morton collection finding aid states there are seventy-six black-and-white 35mm negatives in Subseries 2.1, which is devoted to the negatives Morton pulled together during the making of Making a Difference in North Carolina. There are thirteen 35mm color slides from this same date in Subseries 2.6: “People, Identified.” Currently there are twelve of these images related to Morton’s coverage Helms available in the online collection.

A caption in Making a Difference in North Carolina notes that one event Morton photographed that day was a confirmation hearing for Jack F. Matlock Jr. held by the United States Senate Committee on Foreign Relations.  Matlock was a native of Greensboro and a Duke University alumnus.  From the extant negatives and slides, it appears Morton did not photograph Matlock.  On another note of interest, Senate Foreign Relations Committee member Senator Edward Zorinsky, Democrat from Nebraska, died the next day, March 6th, at the 1987 Omaha Press Club Ball.  In the photograph below, is that Senator Zorinsky on the right?  It may be hard to tell for certain because there is not a full resolution scan online to zoom in and look more closely, so below is a cropped detail.

Another similar photograph for a different angle . . .

One photograph from the day serves as an excellent example of why photographic archives desire to obtain negative collections, not just photographic prints.  Below is a photograph of Helms with Senator John Warner of Virginia as published in Making a Deference in North Carolina . . . 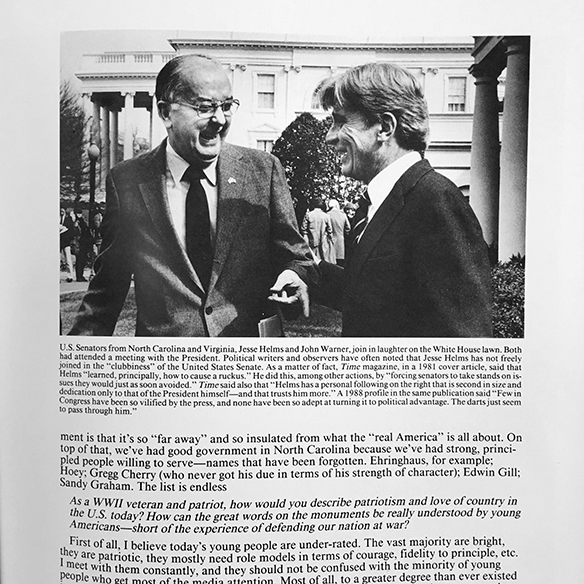 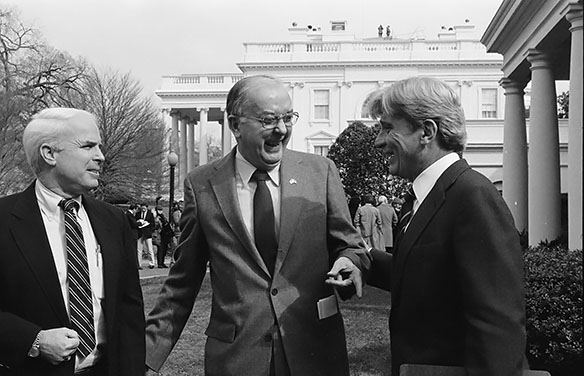 For the book, Morton decided to crop out Arizona’s senator John McCain.
Here’s another photograph from the day that’s not in the online collection:

I recognize Helms (left) and Dan Quayle (center).  Want to try your hand on the others?

ADDITION made on 8 March 2018: negatives depicting West Virginia Senator Robert Byrd appears in some of the negatives made on this day, but I did not use one for this blog post.  I noticed afterward, however, that there is a separate listing for three 35mm negatives in the Morton collection finding aid for Robert C. Byrd made on March 5, 1987 (the date in the finding aid is March 6th) in Envelope 2.1.48-5-1.

3 thoughts on “A drive to Washington D.C. with Barrier: part 1”