A couple of recent media reports indicate that stock car racing as we have known it since the late 1940s might be undergoing some changes. It has been reported that NASCAR’s founding-family, the France family, is looking for a buyer. On a different track, a couple of weeks back on May 12th, NASCAR’s “King” Richard Petty sold, in his words, “a bunch of stuff,” (more than 170 items) from his memorabilia collection, including his iconic No. 43 Day-Glo red and Petty Blue 1974 Dodge Charger, considered one of the most historically important cars in NASCAR history. It sold for $490,000  So with changes looming overhead, NASCAR heads into its big 2018 twin bill weekend in Charlotte with the Alsco 300 on Saturday and the Coca-Cola 600 on Sunday.
Back on October 10, 2014, A View to Hugh featured the 1971 “National 500” at the Charlotte Motor Speedway.  We noted that, while High Morton is famous for his sports photography, there aren’t many NASCAR events represented in his portfolio.
Then about this time last May, Jack Hilliard wrote a post about the 1983 “World 600” at CMS. While writing the post he thought there were images from that race in the Morton collection, but after careful study, I determined that the suspected “World 600” images were actually from a “600” preliminary race: the 1983 “Mello Yello 300.” Our post, titled “Back at the Track,” turned out to be a “Morton Mystery” solver.  Thirty-five years ago, on May 28, 1983, Morton actually was present to photograph a Late-Model-Sportsman race at the famous speedway.  Morton collection volunteer Jack Hilliard takes a look back at that rare occasion when Morton documented the 1983 “Mello Yello 300.”


On Friday, May 27, 1983, Late Model Sportsman driver Morgan Shepherd (Car #7) from Conover, North Carolina literally dodged the rain drops to win the pole position for the 300 mile race to be run the following day. Shepherd’s speed of 161.565 miles-per-hour beat Neil Bonnett (Car #75), who would start on the outside front row with a speed of 160.598. Rounding out the top five qualifiers were Dale Earnhardt (Car #15), Harry Gant (Car #28), and Bill Elliott (Car #17). Twenty additional positions had been filled the day before on Thursday, May 26th.
The rain drops were gone on Saturday, May 28th as 75,000 race fans came out for the “Mello Yello 300.”  Dale Earnhardt (Car #15), from nearby Kannapolis, took the lead from Neil Bonnett (Car #75) on the second lap. Earnhardt held the lead for fifteen laps. Then, Bonnett, Earnhardt, and Harry Gant (Car #28) took turns sharing the lead until lap 50, when Earnhardt made an unscheduled pit stop under green.  His stop cost him a lap. He would say after the race, “I thought we had a tire going bad.”  But the problem was actually a handling issue which the Earnhardt team battled most of the afternoon.
Pole sitter Morgan Shepherd (Car #7) exited the race on lap 53, suffering a broken shock mount on the rear end of his Oldsmobile.  With Earnhardt a lap down, it was Bonnett and Gant playing leap frog with the lead. Then On lap 76, a crash took out the current Late Model points leader, Asheboro’s Sam Ard (Car #00). Three laps later, on lap 79, Earnhardt got his lap back.
On lap 93, Bill Elliott (Car #17) took over the lead for 26 laps before Gant got back in front on lap 119. But by lap 100, Earnhardt had gotten back into second place and then on lap 136 he took over the lead for good leading the final 64 laps to take the win, beating Neil Bonnett by about 5 seconds. The winning speed for Earnhardt’s yellow and blue Wrangler Pontiac was 117.724 miles per hour. For his win, he got $9,100 and overall he led 83 of the 200 laps run.

Earnhardt battled Bonnett a good part of the afternoon, which Morton captured from his position high above the track.  Bonnett, who led the race 7 times for 61 laps, said “I felt pretty good out there until the last restart when we felt a valve spring breaking.”  For Earnhardt, this particular victory was a breakthrough since he had never before won this race, having twice finished second. Neil Bonnett would go on to win the 1983 “World 600” the next day with Earnhardt finishing 5th.
Addendum by Stephen Fletcher 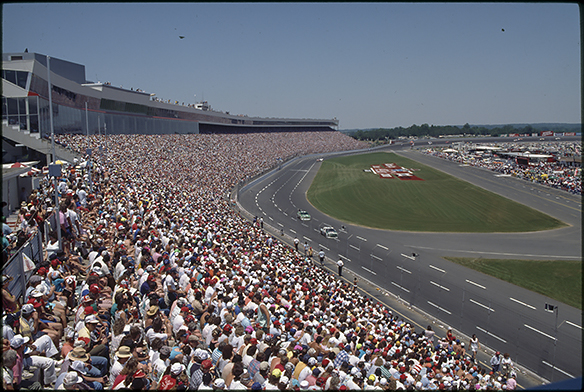 Want to help solve a “Morton Mystery?” The slide above is different from the rest of the slides in lot PTCM2_8894.  The first eleven slides in the set are in Kodak cardboard mounts numbered between 9 and 21; the slide above, however, is in a Pakon plastic mount with dot-matrix printing that reads, “D.H.  600-39” and [slide number] “29.”  The large infield logo seen above (detail below) is not in the infield seen in the opening image of last year’s post.  Can anyone identify the race in the above image?  Is it a different year of the 600?  Is “D.H.” the initials of another photographer? (There are several images in the Morton collection by other photographers.)  Please let us know what you think! 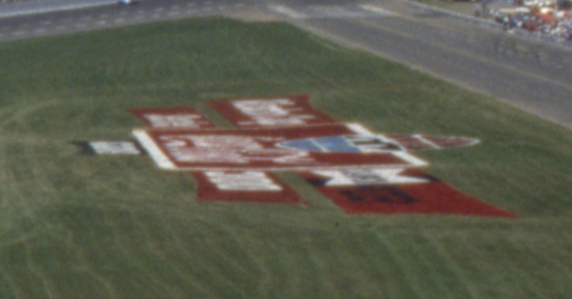 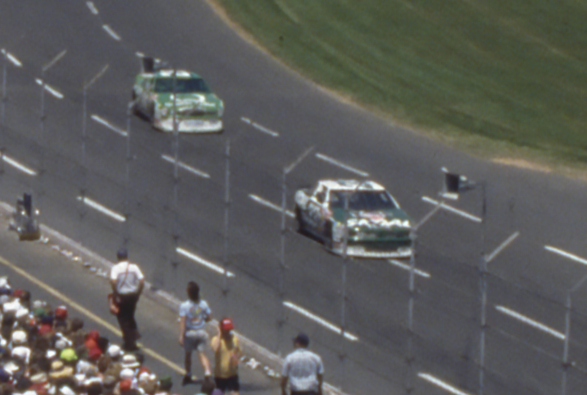