Belated Happy New Year!
For the past year or so, it has been really difficult for me to write blog posts for A View to Hugh on a regular basis.  Thank goodness for Jack Hilliard’s continued interest in writing for the blog!  If you are a regular reader, you might be wondering why it has been relatively quiet here.  You might even be thinking that, eleven years after this blog’s debut in November 2007, there isn’t much work being done with the Morton collection.  If fact, just the opposite is true.  I worked extensively with the Morton collection during 2018.  In honor of what would be Hugh Morton’s 98th birthday today, let me share with you what I have been doing to extend the life of his photographic negatives.
Morton’s film negatives and color transparencies dating from the late 1930s through the early 1960s are physically made of cellulose acetate film stock.  The common name for these various acetate negatives is “safety film” because it replaced cellulose nitrate film stock, which is highly flammable.  Many brands of film from that time period have the word SAFETY imprinted onto the edge of the film.  Kodak issued its first safety film in 1926, but they became more common in the marketplace by the early to mid 1930s.  They coexisted for several years with their cellulose nitrate brethren. Adding SAFETY to the sheet films’ edges distinguished them from their predecessor films made using cellulose nitrate, which then began to have the word NITRATE on their edges. 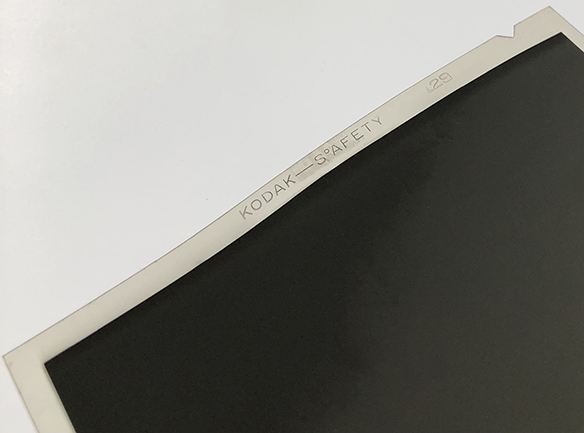 A keen eye will notice in the negative seen above that its edge has a slight wave.  If you follow the links to the Wikipedia entries in the previous paragraph about these film bases, you may read more about how they deteriorate.  For acetate films, basically, the negative begins to distort as the cellulose acetate base layer begins to break down, eventually causing its base to separate from the emulsion layer.  The first stage of deterioration is a symmetrical curling of the film edges, meaning the curls are the same on opposite sides of the negative.  This can go undetected if the collection is not used or inspected routinely.
Typically one’s nose is the first to detect that deterioration has begun.  When the chemical composition of the cellulose acetate degrades to a certain level, the film emits the smell of vinegar—acetic acid.  The next stage of deterioration is an asymmetrical warpage of the negative: where the curling is “upward” on one edge, it is “downward” on the opposite edge.  Often, but not always, small bubbles will appear.  Finally, the emulsion layer and the film base separate from each other.


We detected that some acetate negative deterioration had already taken place in the Morton collection before it arrived at Wilson Library, although the problem was not widespread.  We removed those negatives that were already deteriorated and those that exhibited the early stages of deterioration into a separate box during archival processing.  We did that in order to isolate the bad from the good, because the deterioration process is autocatalytic and thus can cause nearby good negatives to deteriorate.  If you look in the Morton collection finding aid, you will see several entries with the phrase “removed to Sheet Film Box P081/BW-11 due to acetate deterioration.” 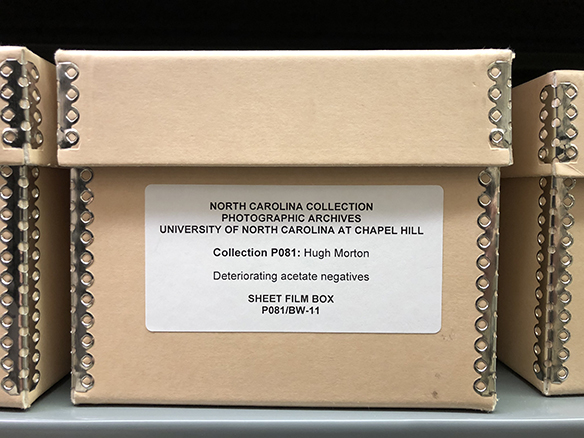 Storing negatives in a warm and/or humid environment exacerbates the deterioration process.  A cool, dry environment slows down the process; only storage at zero degrees Fahrenheit, however, will impede the process.
Acetate deterioration became known to film manufacturing industry in the late 1940s.  Manufacturers developed a replacement made from polyester during the early 1960s. Polyester films are remarkable stable.
The traditional method to preserve images on nitrate and acetate film negatives has been to make duplicate film copies using the interpositive method.  An unexposed polyester film negative is placed in direct contact, emulsion to emulsion, to the acetate or nitrate negative, then properly exposed to light and chemically developed using archival film processing techniques.  A negative film stock exposed to a photographic negative, produces a positive, which is then used to expose it to another sheet of unexposed film to make a duplicate negative—hence the word interpositive.
Vendors who make preservation duplicates using film today are rare and the cost is prohibitive because film and processing chemistry are no longer readily available.  As you probably guessed, the duplication method has been replaced by digital technology.  But it was not until September 2016 that an agreed upon standard—the Federal Agencies Digital Guidelines Initiative (FADGI)—determined specifications deemed acceptable for preservation digitization. That high level of preservation digitization is called FADGI 4-star.
In mid November 2016, the North Carolina Collection received a significant donation from the Ellis and Rosa McDonald Fund for Excellence to provide continued support of the Hugh Morton collection preservation project. I embarked on a pilot project with Chicago Albumen Works using a representative sample of negatives of different formats (3×4-inch negatives, 4x5s, 35mm, as examples).  After completing the pilot project, I decided to focus on Morton’s earliest work, typically 3×4 negatives before he routinely used 4×5 starting in the early 1950s.  I then moved to the 4×5 negatives made until the transition from acetate film to polyester film stocks in the early 1960s.
For both formats I needed to determine the negatives’ condition and—because we couldn’t possibly digitize every negative in the collection—the importance of their subject matter and the image quality of the negatives.  To keep track of selections sent to the vendor, I created a spreadsheet that also helped me to standardize the file names for the scans to be typed by the vendor during production. In summary, Chicago Albumen Works digitized nearly 2,950 negatives at FADGI 4-star quality.
All that represents a significant amount of work that kept me from putting together blog posts.  One post did emerge from the process when I discovered the negatives of Gerald P. Nye’s visit to UNC, and another post about Alton Lennon is waiting in the wings. This post is getting a bit long, however, so I’ll stop here and save additional details about the preservation digitization project for a future peek “Behind the Scenes.”