When Carolina played its 2019 home opener on September 7th against Miami, there was a certain “electricity” in the air…Head Football Coach Mack Brown was back…the Heels had beaten South Carolina the weekend before and expectations were high. While the feeling was a bit unusual in Chapel Hill, it wasn’t unique. A similar event took place on November 8, 1997, and Morton collection volunteer Jack Hilliard takes a look back 22 years ago today.
I remember in a 1973 conversation I had with UNC Legend Charlie Justice how excited he was recalling the famous 1948 UNC – Texas game. “People in ten-gallon hats and flashing big money showed up on Franklin Street as early as Thursday before the big Saturday game on September 25th. Tickets were being bought and sold for more than a hundred dollars…big money in those days. There was an excitement in the air…kinda’ like ‘electricity.’ If you were in Chapel Hill for the ’48 Texas game, you will always remember it.”
I was not in Chapel Hill for that big game celebration in 1948, but when I came into Chapel Hill on the afternoon of November 8, 1997 for the Carolina – Florida State game, I sensed what Justice was talking about.
In the early afternoon, Franklin Street was crowded with fans from each team. This time tickets were selling for as much as $500. One downtown merchant was quoted as saying, “I think this is the biggest sporting event this town has ever seen.”
In the southeast corner of Kenan Memorial Stadium, ESPN’s “Game Day” team of Chris Fowler, Lee Corso, and Kirk Herbstreit was set to send the game out across the nation. Major publications like USA Today and The New York Times were represented in the press box along with Sports Illustrated. NFL scouts were there in abundance as were guys in Orange jackets representing the Orange Bowl.  Woody Durham and Mick Mixon were in place for the Tar Heel Sports Network. And of course, photographer Hugh Morton was in his place along the Tar Heel sideline.
By late afternoon, Franklin Street looked a lot like it does after a big basketball win. The gray skies and mild temps made for perfect football weather as the 7:30 kickoff approached. The Florida State Seminoles, undefeated under head coach Bobby Bowden, were ranked second in the country while the undefeated Tar Heels were ranked fifth.  The newspaper headline above the masthead of Carolina Blue on November 8 simply said: “TITANS COLLIDE AT KENAN.”


Then, just before the start of the game, a very light mist fell on the 62,000 who had jammed into Kenan Stadium.  It didn’t last long, however, and all was in order for the game. Newly elected Atlantic Coast Conference Commissioner John Swofford greeted both head coaches just prior to the kickoff.  When the clock said 7:30 PM, they began to play the game. Soon, the Seminoles pulled the plug on all that “electricity” from a week of hype and excitement. 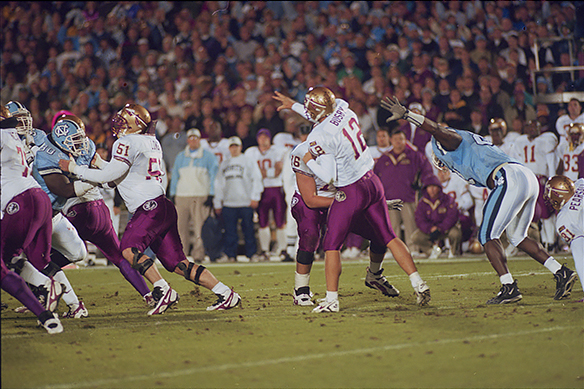 Eleven minutes into the game, Florida State had its first score, an eight yard pass from quarterback Thad Busby to tight end Melvin Pearsall.  Then at the 4:27 mark of the second quarter it was Busby again—this time a fourteen-yard pass to wide receiver E.G. Green. And just seconds before the end of the first half, Sebastian Janikowski kicked a thirty-two-yard field goal that made the halftime score 17 to 0.
During the halftime break, Coach Bowden told his offensive coaches if Carolina didn’t score on its first drive of the second half, concentrate on the running game and eat some clock. The Tar Heels did not score on its first drive.  The teams traded field goals during the remainder of the second half, making the final score 20 to 3.  Florida State’s dominance was reflected in the final stats. The Seminoles finished the game with 334 net yards of offense with 19 first downs compared to Carolina’s 73 and 7.

After the two head coaches shook hands at midfield, Coach Bowden turned and walked toward the southeast corner of the stadium where many of the Seminole fans were standing. Just then the Florida State band struck up Happy Birthday, as Bowden waved to the crowd. He had turned 67 on this day in Chapel Hill.
Coach Brown in his post-game news conference said, “I thought the week was a win. All the attention will really help our program. It will help in recruiting. Even though we lost tonight we’ll gain a whole lot out of this.”
The Tar Heels fell from fifth in both national polls to eighth in the AP Media Poll and ninth in the USA Today/ESPN Coaches’ Poll.  Florida State jumped to number one in the USA Today/ESPN Coaches’ Poll and remained number two in the AP Media Poll.
As the 62,000 fans filed out of Kenan Stadium that night in ’97, there were at least two who had been there in ’48: Charlie Justice and Hugh Morton. But the ’97 outcome was nothing like the one in ’48.
______________________________________________
Epilog:
Following a home win against Wake Forest on November 15th and a three-point-loss on November 22nd to Florida, Florida State finished the season 11 and 1 and a national number three ranking.  Bowden would remain the head coach at Florida State until 2009 and win a second national championship in 1999.
Carolina would close the season with a win at Clemson and a home win against Duke. They finished the season at 11 and 1 and ranked number six. Following the 1997 regular season, Mack Brown left UNC to become the head coach at Texas.  He remained there through the 2013 season, winning a BCS National Championship for the Longhorns in 2005. He returner to UNC in 2019.

2 thoughts on “A certain “electricity” in the air”