A View to Hugh marks a dozen years today.  We published our very first post on November 1, 2007.  Casting about for subject matter to mark the occasion, I took to Hugh Morton’s executive planners with hopes that he would have been up to something interesting on one of the November firsts represented within the years covered by the planners.*  Thankfully, on November 1, 1990—twenty-nine years ago—he was.


On that day, Morton accompanied movie director Michael Mann and his North Carolina locations manager Michael Bigham on a scouting trip for Mann’s film The Last of the Mohicans. According to an October 27, 1989 article in The Asheville Citizen, Mike Bigham was a member of the Western North Carolina Film Committee.  Information surrounding Morton’s involvement with Mann’s trip for his film is limited to the above entry in Morton’s planner and the negatives Morton made during their search.  Morton’s negative envelope description is “Lost Cove Cliffs, Scouting for ‘Last of the Mohicans.'”

Morton made two snapshot-like portraits of Mann (one can be seen at the end of this post) and one photograph as he walked on boulders just upstream from some rapids or a small waterfall.

The movie’s United States debut was on September 25, 1992 at Asheville’s Beaucatcher Cinemas.  On October 4, the city’s Sunday newspaper The Citizen-Times featured an article on the movie titled “Mohican madness.”  Written by Connie Mixson, the article explored the making of the film based upon an interview with Bigham, a UNC Chapel Hill Class of 1980 graduate.  Six years after Mohicans, Bigham would become the location manager for Patch Adams released in 1998—filmed in part on the UNC Chapel Hill campus including Wilson Library.
Mixson reported that Bigham had just finished working in Winston-Salem as the assistant locations manager for James Orr’s movie Mr. Destiny in October when he received a call from Mann’s office.  They told him to rent a copy of the 1936 black-and-white movie version of James Fenimore Cooper’s story.  Two days later Mann went to Asheville and met Bigham, “then they boarded a helicopter and scouted Western North Carolina.”  They “toured lakes in five states from the air, land and water, taking pictures . . .”  Mann selected Asheville and vicinity for his movie, set in upstate New York.  Part of the film was shot at Linville Falls.
Do you have more you can add to the story?  How did Hugh Morton become involved in the locations search?


One part of the Hugh Morton Collection that we do not seem to utilize as much as we should is Hugh Morton’s film footage.  Today marks the annual observance of UNESCO World Day for Audio Visual Heritage, so it’s an apt day to explore the films of Hugh Morton.
The Morton collection finding aid lists holdings by subjects within broad categories.  The audiovisual materials, however, are listed in a spreadsheet accessed through a link in the finding aid.  From the finding aid, click on the phrase “Information for Users” in the left column and look for “Additional Descriptive Resources.”  Clicking on that link opens a PDF of a 107-page spreadsheet that itemizes the component parts of the audiovisual material holdings. 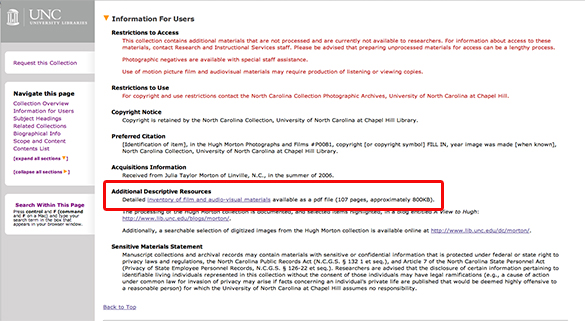 The main reason we cannot do more with video at A View to Hugh is the 25MB upload file size limitation for videos set by the blog software, WordPress.  Thus far we have made 16 film-to-digital transfers from footage in the Morton collection, but only a couple do not exceed the upload limit.  One file is a 30-second spot for Grandfather Mountain, shared for the first time on this blog.  The other can be seen by visiting a previous post titled “Film of John F. Kennedy in the Morton collection.”
Beyond these two titles, you may explore the PDF and let us know if there is footage that looks promising for your research.  If it hasn’t already been transferred, we will investigate ways to make it available for use.  Approximately 85 of the 107 pages describe 16mm film footage, with the bulk of the remaining pages listing audio on 1/4″ or cassette tapes.
To use more footage at A View to Hugh, it looks like I’ll need to learn the art of extracting excerpts from the large files to use as snippets in topics yet to be explored.

I’m sitting in a friendly coffee shop in Cullowhee, N. C. going over my presentation for this evening at the exhibit opening of “Photographs by Hugh Morton: An Uncommon Retrospective” at the Mountain Heritage Center at Western Carolina University.  I’ll be talking with a museum studies class this afternoon, too, and I’m really looking forward to that.  If you are reading this on March 27th 2014 and are visiting or living in the western NC part of the state, I do hope you can make it this evening . . . and that you do say hello if you do! 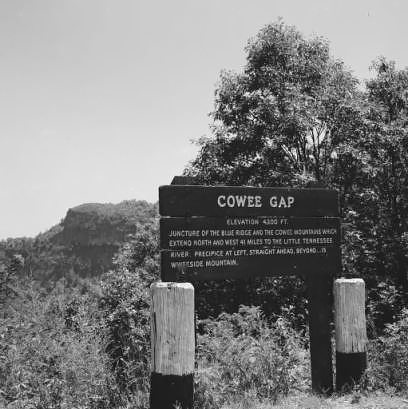 I’m hoping to take the scenic route back home via highway U. S. 64 around Cashiers and Highlands for some “photo ops.”  I suspect I’ll see the sign above (or its successor) along the way.

On this fiftieth anniversary of John F. Kennedy’s assassination, A View to Hugh would be remiss without a post about Kennedy.  But what to write?  JFK has been mentioned or featured several times here, including “A Spark of Greatness,” a four-part series (the link is for part one) related to the presidential and North Carolina gubernatorial race for 1960, and “Memorial for JFK, May 1964” that tells of the ceremony at Kenan Memorial Stadium on 17 May 1964 and Hugh Morton’s chairing the statewide effort to raise funds for North Carolina’s contribution to the John F. Kennedy Presidential Library.
An underutilized portion of the Morton collection is the moving image holdings, which are quite extensive.  A View to Hugh, however, has yet to include a post that draws on any of the footage . . . until today.  The link below leads to about a minute of film (without sound) shot by Hugh Morton:
P081_MI_010001 Kennedy Sanford DC Med Res
On 27 April 1961 Morton, as chairman of the Battleship USS North Carolina Commission, made this motion picture footage while visiting President John F. Kennedy at the White House Rose Garden.  Morton was part of a delegation that included several North Carolinians: Hargrove “Skipper” Bowles, Jr., director of the state’s Conservation and Development Board; Governor Terry Sanford; United States Secretary of Commerce Luther H. Hodges (the state’s governor prior to Sanford) and United States senators B. Everett Jordan and Sam Ervin, Jr.  The footage shows Sanford presenting Kennedy with the first “admiral” certificate in the “North Carolina Navy” as part the fundraising effort to bring the mothballed WWII-era battleship USS North Carolina from New Jersey to Wilmington, N. C.  Admirals would be those who donated $100 or more to the effort.
In reality, it was a different framed item altogether.  The certificate wasn’t back from the printer in time, so a framed item from the office of White House Press Secretary Pierre Salinger served as a surrogate.  Oddly enough, the stand-in certificate was for Salinger’s admiralty in a Flagship Fleet.  Kennedy burst into laughter when he caught the substitution.

The larger mission at hand was planning for North Carolina’s Autumn International Trade Fair, then thought likely to be held in Charlotte in October later that year.  According to Roy Parker, Jr.’s article the following day in Raleigh’s News and Observer, Kennedy “took time from a fast-paced schedule to promote the fair.” After leaving a top-level National Security Council meeting, Kennedy met briefly with the group inside his office before they stepped outside to the Rose Garden.  Kennedy said a few non-committal words of endorsement for the exposition (you can listen to a brief recording from the Kennedy Library website) after Sanford invited Kennedy to attend, because Kennedy would be speaking at UNC Chapel Hill during its University Day celebration on October 12th.
It would seem the battleship commission presentation took place moments after the trade fair promotion.  The News and Observer also published a photograph of that presentation, which appeared on page 38. 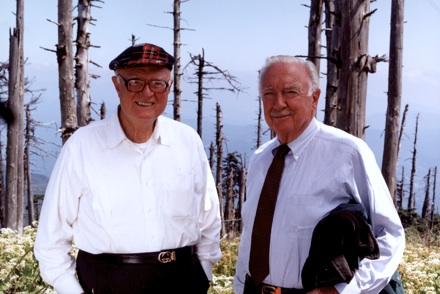 Consider this just a brief View to Hugh tribute to legendary newsman Walter Cronkite, who was laid to rest this week. Blog commenters have noted Cronkite’s primary connection to Hugh Morton: he lent his authoritative voice and reputation as narrator for Morton’s 1995 PBS documentary, “The Search for Clean Air.” As commenter and Morton collection volunteer Jack Hilliard already recounted:

I recall Hugh telling the story of how Cronkite was selected. Morton said he had originally wanted his long-time friend Charles Kuralt for the program, but since the program was scheduled for PBS, Kuralt’s CBS contract would not permit him appearing on a competing network. So when Morton told Cronkite this story, Cronkite said, in his unique deep voice, ”Well, you got me.”

Julia Morton described Cronkite as “lightening in a jar.” We’re lucky to have had him for so many years. 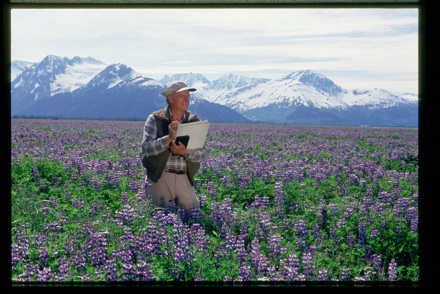 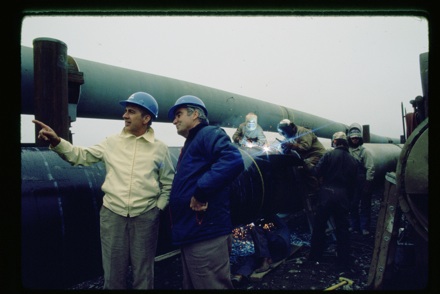 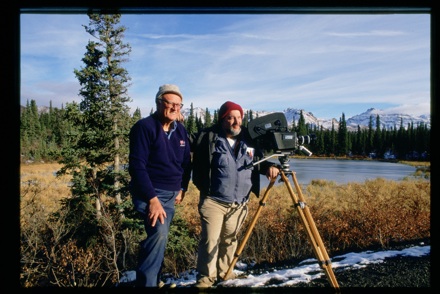 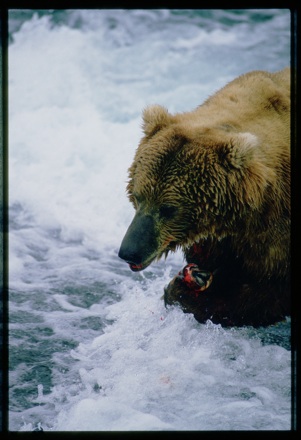 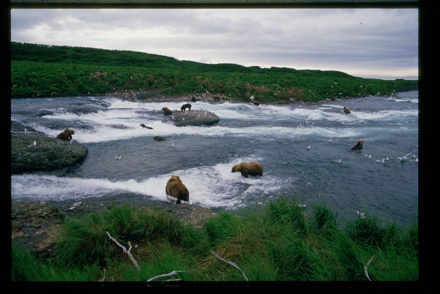