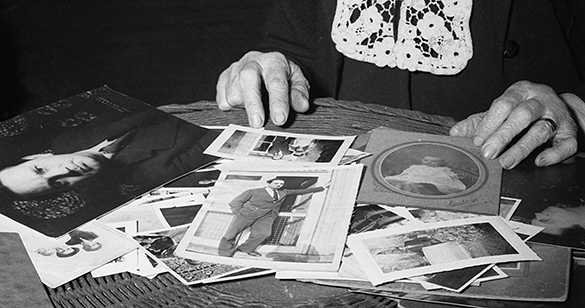 The 36th Annual Conference of the Thomas Wolfe Society kicked off this Friday afternoon at the Carolina Inn in Chapel Hill, North Carolina, where it continues on Saturday.  This year’s conference theme is “Wolfe in his time, Wolfe in our time.”  As you might imagine, Hugh Morton photographed Wolfe-related images during Morton’s time.
Thomas Wolfe died on September 15th, 1938—around the time Morton would have been starting his senior year in high school.  When he was a junior in college—by then an accomplished photographer—The Carolina Magazine “especially sent” staff photographer Morton to Asheville on assignment to make photographs to illustrate an article by Don Bishop (Donald Edwin Bishop, class of 1941).  Simply titled “Thomas Wolfe,” Bishop wrote about Wolfe during his student years at UNC.  The magazine’s editors dubbed that particular issue, March 1942, as its “Baby-Esquire” and the cover donned the temporary title The New Carolina Magazine. [You may read either Bishop’s entire article (it’s very good), the full March issue, or the complete volume for 1941-1942 by clicking this link, then use the “Search inside” box just above the magazine or the sliding scroll bar below the magazine to navigate to Bishop’s article.]
The Carolina Magazine published three of Morton’s photographs: Wolfe’s gravestone, a portrait of his mother Julia Wolfe, and photographs of Thomas Wolfe on a table with his mother’s hands on the table’s edge (seen above).  “Returning with more photographs than could fill these pages,” the caption reads “our staff photographer confirmed the amazing similarity between parts of ‘Look Homeward’ and parts of Asheville itself.  Mrs. Wolfe generously took out all of Tom’s photos she possessed and permitted Morton to take the pictures above.”
Elizabeth Hull wrote a post about Morton’s Thomas Wolfe related images back in 2009 using a few images, including one of two close-up portraits Morton made of Julia Wolfe.  The second portrait she included depicted Mrs. Wolfe from farther back, a full length view as she stands on the porch of “Our Kentucky Home.”  Both of these portraits appear in Morton and Rankin’s book, Making a Difference in North Carolina.  The closeup portrait used by Hull, Morton, and Rankin however, is not the one published in The Carolina Magazine.  That portrait is below, which I scanned for this post.


The main difference between the portraits in Making a Difference in North Carolina and The Carolina Magazine is Morton’s lighting.  Morton made the portrait above using an artificial light source placed to Mrs. Wolfe’s left, while he exposed the other negative using natural, available light.  You can tell by comparing the shadows: in the above portrait Wolfe’s shadow is behind and to her right, while the shadows in her portrait printed in the Morton/Rankin book fall beneath her chin and nose.
The photograph shown at the opening of this post was the largest of the three Morton images used with Bishop’s article—but, similar to the portrait above, the scanned negative viewable in the online Morton collection is a different pose made during the same sitting.  I cropped the opening photograph above as it was in The Carolina Magazine; the full negative can be seen in the scan below. 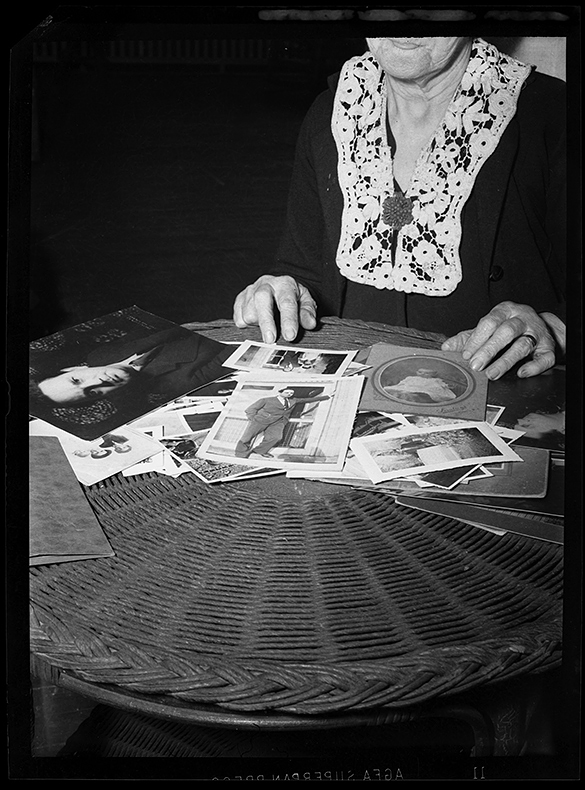 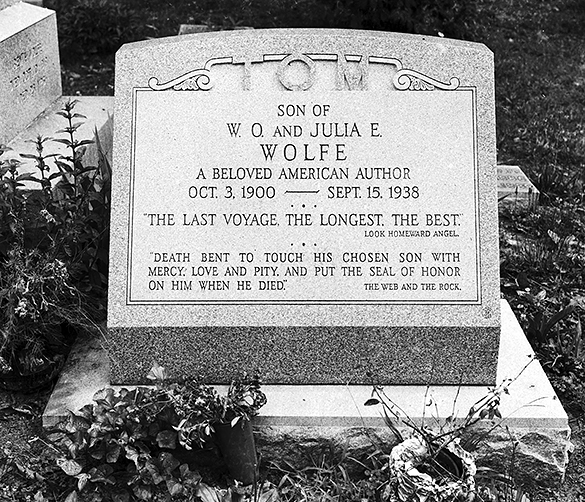 
With that shameless plug out of the way . . . here at A View to Hugh, I couldn’t pass up the chance to show Hugh Morton’s photographs of Sir Walter Raleigh.  Well, not the gent born more than 200 years before the conception of photography, but more recent incarnations caught by Morton’s camera.
First up—the statue of Sir Walter in downtown Raleigh, photographed in 1979.  Talk about a tennis ball . . . this statue has been relocated several times since its dedication on December 3rd, 1976.  You can learn some of its history by reading this statue’s entry in “Commemorative Landscape,” a website published by UNC Library’s Documenting the American South.  Seems like the London’s statue of Raleigh has had to endure relocation, too.  Maybe better heads will prevail and these statues will continue to stand statuesquely in their final resting places. 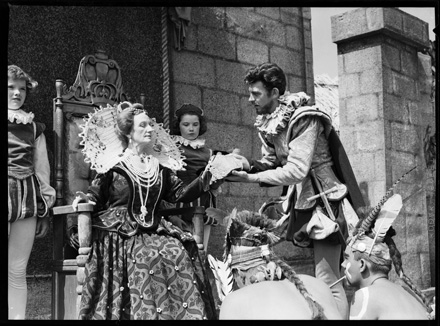 Next . . . Sir Walter, Mount Airy style.  Andy Griffith played the role of Raleigh in The Lost Colony, which we blogged about back in 2012.
There’s also a photograph of the British queen receiving Raleigh. 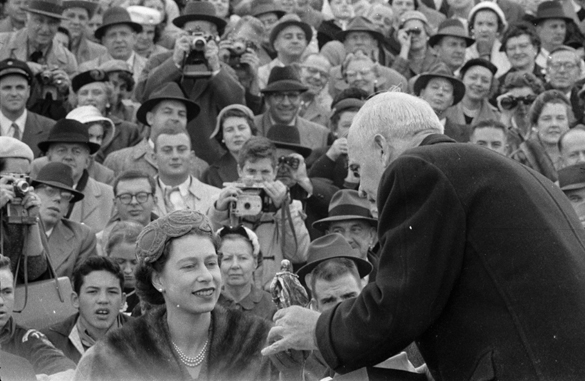 
Though this admission may cause some to question my Tar Heel credentials, I will confess that I am currently reading Thomas Wolfe‘s Look Homeward, Angel for the very first time. It’s a moving and incredibly rich book, though, okay, occasionally long-winded. As I read, I am struck again and again by the vibrant imagery of Wolfe’s language — his descriptions of nature and food, in particular, truly engage the senses.
Thus it would come as no surprise that someone as visually-minded as Hugh Morton would feel some affinity to Wolfe — not to mention that both were “big men on campus” at UNC-Chapel Hill in times of war (Wolfe during WWI and Morton during WWII). In 1941 (only a few years after Wolfe’s untimely death) Morton had his own first-person encounter with Angel‘s milieu. As he recounts on page 7 of Sixty Years with a Camera:

While I was a student at Chapel Hill, the CAROLINA MAGAZINE sent me to Asheville to interview Julia Wolfe, the mother of novelist Thomas Wolfe, at the Old Kentucky Home. You remember that Tom wasn’t very kind to his mother in his book….and for a while I wasn’t sure that I was going to be kind to her. But after I’d been there for a day, she warmed up, became very friendly, and took me out to the cemetery to see his grave. 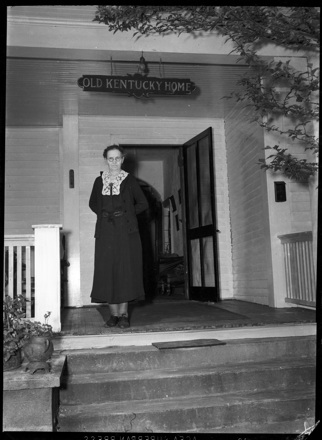 Ed Rankin describes this same event on page 249 of Making a Difference in NC, quoting Morton as saying that “[Mrs. Wolfe] was obviously proud of her son, proud of the success his works enjoyed…but she had mixed feelings about what he had written about her. Perhaps she didn’t know whether to laugh or cry.” 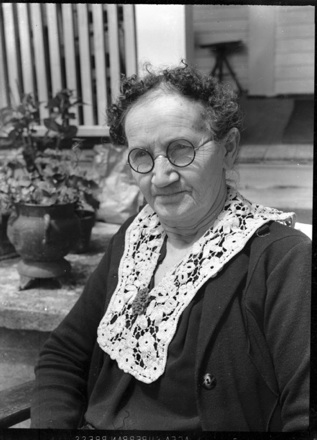 I have to say that these Morton images certainly conform to my mental picture of Angel‘s Eliza Gant, the white-faced, pursed-lipped penny-pincher who endlessly tormented her youngest son Eugene.
The North Carolina Collection here in Wilson Library holds several Wolfe-related collections, including a photograph collection. Library staff are currently working on an overhaul of the online access to these collections, so keep your eye out for some nice new finding aids!
And speaking of Wolfe-related imagery, UNC’s Center for the Study of the American South is currently exhibiting artist Douglas Gorsline’s rarely-shown original drawings for the first illustrated edition of Angel, loaned from the North Carolina Collection. The drawings are on display through September 30, with a public reception next Thursday (8/27) featuring live music and dramatic readings from the novel.