If there’s one thing “A View to Hugh” has made clear, it’s that every photograph has a story behind it—especially if it was taken by Hugh Morton. My recent visit with Hugh’s wife Julia, daughters Judy and Catherine, and grandson Crae really impressed this point upon me. Mrs. Morton could barely finish telling me one story before launching into another (I tried to take notes, but eventually gave up). I do remember one set of photos she mentioned, of the “Cat Girl,” a New Orleans burlesque performer Hugh went to see on one of his trips to the Sugar Bowl with the Charlie Justice team in 1947. Here she is: 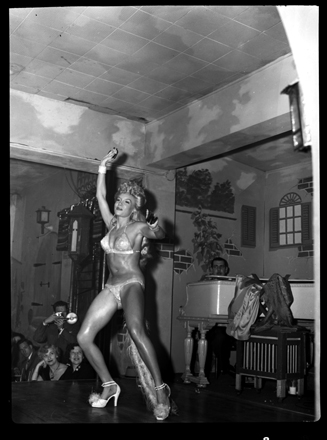 The website FrenchQuarter.com has a tidbit about “exotic dancer Lilly Christine the Cat Girl”—that must be her! According to Mrs. Morton, Hugh didn’t care for cheesecake photography, and “wasn’t good at it”—he was apparently pressured, against his will, to go see the Cat Girl by a group of friends that included then-mayor of Chapel Hill, Robert W. Madry.
This is just one example. As great as the stories are, the difficulty is that 500,000 images in the Morton collection equals a heck of a lot of stories—a lifetime’s worth, from a very full lifetime. (Using the “1,000 words” estimate, that’s 500 million words!!) Uncovering and documenting all these stories is one of the major processing challenges we face.
Fortunately, we have people to draw on, like Hugh’s family, friends, acquaintances, and other readers of this blog. And we have other sources, too, like one I just got around to looking at—that fabulous magazine The State (now known as Our State), in which Morton photos were very frequently featured. Here in the North Carolina Collection, we’re lucky enough to have not only the entire run of the magazine, but also subject indexes, and (thanks to some wonderful guy named Robert M. Topkins) a 1976 index to pictures appearing in The State.
Morton was friends with the original publisher Carl Goerch, as well as his successor Bill Sharpe, whom Morton has described as “the one person who most whetted my interest for making pictures of and for the state [of North Carolina].” This photo of Goerch, Sharpe, and Sharpe’s wife appeared on page 7 of the August 19, 1950 issue of The State, along with the text quoted below. 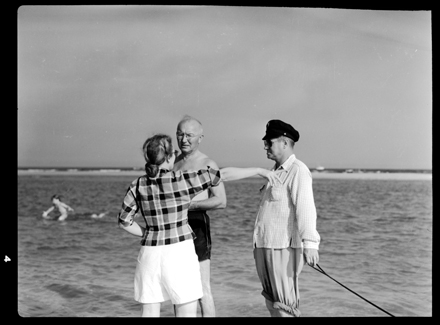 As you look at this picture you can almost guess the words that might have been spoken:
Says the lady: “You numbskull! You nit-wit! You’ve got no business on this beach. Now get yourself away from here just as quickly as you can, before I call a policeman. Git, I tell you; git!”
Says the man in the bathing trunks: “But lady, I didn’t mean any harm! Goodness knows I didn’t. When you were stooping over, picking up shells, I thought you were my wife. That’s the reason I spanked you.”
Says the lady: “I don’t want to hear anything further from you. On your way before I call a cop!”
Says the man with the marine cap, the dark glasses, the checkered shirt, the rolled-up trousers and the slightly protruding stomach: “That’s tellin’ him, mamma: that’s tellin’ him!”
The lady happens to be Mrs. Bill Sharpe. The man in the bathing trunks happens to be the editor of this publication. The man with the marine cap and all the other accessories, including the slightly protruding stomach, happens to be Bill Sharpe. And Hugh Morton of Wilmington just happened to be around just in time to take the picture.

I guess if you don’t know the story behind a picture, you can always make one up . . .

One of the many titles bestowed on Hugh Morton over the years is “the father of North Carolina photojournalism education.” He was a charter member of the National Press Photographers Association and president of the North Carolina Press Photographers Association. Appealing to a broader audience, Morton founded in 1952 the annual Grandfather Mountain Camera Clinic for amateurs and professionals, and the Nature Photography Weekend, also hosted by Grandfather Mountain.
Perhaps most notably, Morton was a founder and the first chairman (1950-1965) of the Southern Short Course in Press Photography. Now known as the Southern Short Course in News Photography, this training program for students and professionals is the country’s longest-running seminar in photojournalism. The images below are from the early years of the Short Course, probably 1951-1953, when it was held at the University of North Carolina at Chapel Hill. The first image shows Joseph Costa (left, in bow tie), well-known American newspaper photographer, photography lecturer at Ball State University, and a founder of the National Press Photographers Association; the other man presenting (back to camera) appears to be Hugh Morton. Since most audience members are wearing name tags, this image is handy for identification purposes. (Few of the names are legible, however, and none at the resolution presented here.) 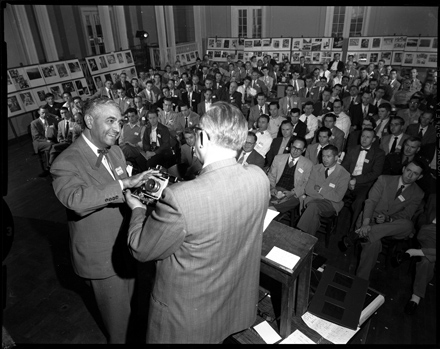 The next image shows unidentified instructors presenting about darkroom procedure. (Sharp-eyed readers of this blog might notice Burlington photographer Edward J. McCauley in the third row, third seat from the left—see Patrick Cullom’s recent post, A Contemporary of Morton). 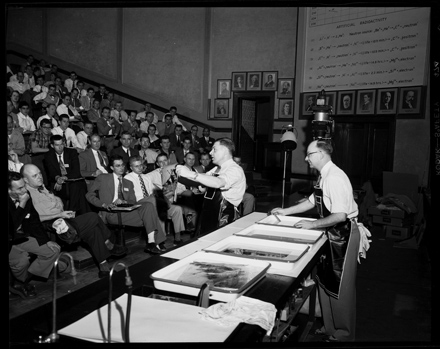 Our blogging compatriot over at the Blue Ridge Blog says, “I’ll always remember Hugh Morton as a photographer’s photographer. He understood the needs of a working photojournalist and went out of his way to make the job easier for us.” Do you have any photojournalism- related memories of Morton to share? Can you provide any information about these early Short Course images?