It’s been an exciting few weeks in North Carolina politics! Not only did last Tuesday’s primary inspire huge numbers of new voter registrations and shatter voter turnout records, for the first time in seemingly forever, it appears the state may have played a very important role in determining the Democratic nominee for President. I suspect these events would have thrilled Morton—a lifelong, committed Democrat and onetime gubernatorial candidate.
So it seems like a good time to share these two Morton slides, scenes from the 1960 Democratic National Convention in Los Angeles, showing supporters of John F. Kennedy and Lyndon Baines Johnson, respectively. Despite heated clashes between the two during the primaries, Kennedy and Johnson ended up forming a joint ticket (with Kennedy on top), which went on to (narrowly) defeat Richard Nixon in the general election. 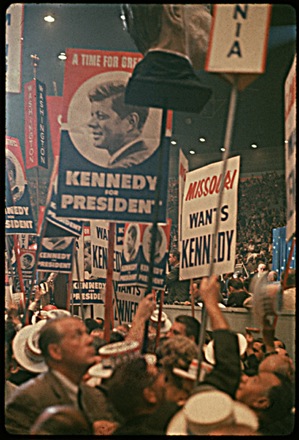 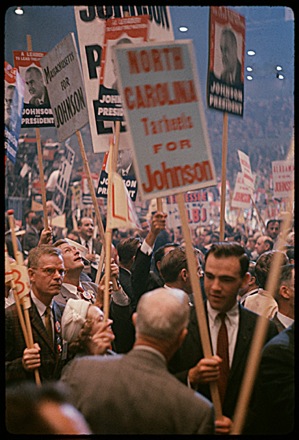 Here’s an interesting quote from the Wikipedia page about the 1960 election:

Kennedy was initially dogged by suggestions from some Democratic Party elders (such as former President Harry Truman) that he was too youthful and inexperienced to be president; these critics suggested that he agree to be the running mate for a “more experienced” Democrat. Realizing that this was a strategy touted by his opponents to keep the public from taking him seriously, Kennedy stated frankly ‘I’m not running for vice president, I’m running for president.’