We’re pleased to present the very first essay from Worth 1,000 Words project, written by journalist ROB CHRISTENSEN. Rob has been writing about N.C. politics as a reporter and a columnist for 36 years for The News and Observer and The Charlotte Observer; his book The Paradox of Tar Heel Politics won the N.C. Literary and Historical Association’s Ragan Old North State Award for the best work of nonfiction in 2008.

In 1971, Hugh Morton announced his short-lived candidacy for governor with all the public relations panache that he brought to his other projects, from promoting Grandfather Mountain, to salvaging the battleship USS North Carolina, to saving the Cape Hatteras Lighthouse. 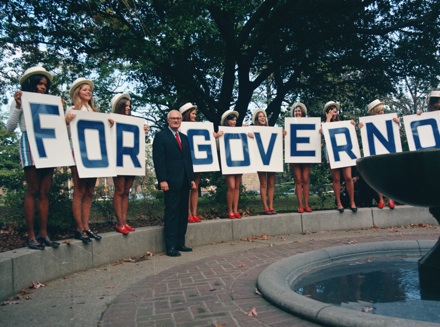 A row of pretty young women in shorts and straw boaters stood outside the Capitol in Raleigh on a chilly December day holding up placards with letters that spelled out “Morton for Governor.” Country music stars Arthur and Ralph Smith warmed up the crowd. Former Carolina football legend Charlie “Choo Choo” Justice was on hand to lend support.
Although he visited all 100 counties by helicopter, Morton’s gubernatorial campaign never got off the ground. While Morton never held political office, he was long a political player, serving as advisers to Tar Heel governors from Luther Hodges to Jim Hunt, attending national political conventions, with an uncanny knack for being in the room at just the right time.
Morton was card-carrying member of the state’s post World War business/political/civic leadership – a group who worked to move a once poor agricultural state into the national mainstream. They tended to be pro-business, pro-education with strong ties to the University of North Carolina. They sought to avoid the racial turmoil that swept much of the rest of the South as the system of Jim Crow crumbled. They were mainly moderate Democrats, although they could just as easily be called moderate Republicans. University of North Carolina historian George Tindall once called them “business progressives” and that is as good a label as any.
Morton’s photographs of political figures span more than a half a century. Among the first is a photograph of UNC President Frank Porter Graham, a future senator, squiring First Lady Eleanor Roosevelt around the Chapel Hill campus. They include photographs of Governor J. Melville Broughton, Senator Clyde Hoey, and end with such 21st century figures as Governor Mike Easley. My favorite political photo is of Governor Kerr Scott taken during the 1956 Democratic National Convention in Chicago, a cigar sticking out of the side of his mouth, a campaign boater on his head and an (Adlai) Stevenson button on his lapel – the picture of a happy warrior. 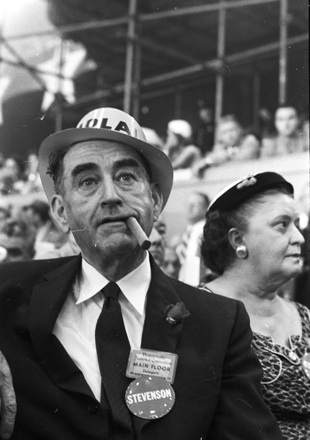 While there are plenty of photographs of official occasions, there are also lighter moments as well – Governor Dan Moore fishing, Governor Kerr Scott in a t-shirt and overalls on his Alamance County farm; UNC President Frank Graham pitching horse shoes, and a posed gubernatorial candidate William Umstead at his piano, a campaign shot designed to soften his austere image.
A photograph of Governor Luther Hodges shows him with a trout fly embedded in his cheek. The governor appeared one day at Morton’s house on Grandfather Mountain Lake with the request: “How about cutting this thing out for me, Hugh?” Worrying about a possible infection, Morton had instead taken him to a local hospital, snapping the picture of the wounded governor in the hospital waiting room.
Morton had backstage entrée to the North Carolina’s powerful politicians because he was a friend and political intimate of many of the men – and men it was until recently – whose images he captured in photographs.
Kerr Scott appointed him to the state Board of Conservation and Development in 1951. He served as publicity manager for Governor Luther Hodges’ 1956 election campaign. Governor Terry Sanford appointed him chairman of the commission to bring the battleship the USS North Carolina battleship to Wilmington in 1961, and Governor Jim Hunt appointed him to lead a campaign to change the constitution to allow governors to serve consecutive terms. Because of Morton’s expertise in public relations, governors wanted him to do even more. But Morton picked his battles. He rejected Hunt’s proposal to lead the campaign for an unpopular gas tax increase in the early 1981.
Judging from the number of photographs in the collection, Morton seemed to have a special relationship with two mid-20th century political figures who were more his contemporaries, Governors Luther Hodges and Terry Sanford. 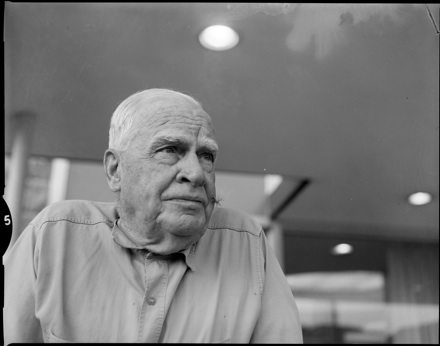 Hodges, a former textile executive, was among the first governors to travel throughout the country and the world courting industries. If Hodges was “the South’s number one salesman,” as Time magazine called him, North Carolina had fewer better salesmen than Morton. While Hodges was promoting industry, Morton was touting tourism – from making Grandfather Mountain into a tourist attraction, to raising $315,000 to bring the USS North Carolina to his home town of Wilmington to getting arch-rivals Jim Hunt and Senator Jesse Helms to work together to raise $500,000 in 1981 to help prevent Cape Hatteras lighthouse from sliding into the sea.
The Morton-Sanford connection was in part a generational one. Both were wounded World War II veterans, with Sanford serving in the Europe and Morton in the Pacific. (Even in wartime, as an Army photographer, Morton showed an uncanny ability to be near power snapping close-ups of General Douglas McArthur.)
Both Morton and Sanford were also attracted to John F. Kennedy, another energetic World War II veteran, and the collection is rich with Kennedy images. Morton led the North Carolina effort to raise money for the Kennedy presidential library in Boston. Only Massachusetts raised more money than North Carolina ($250,000.)
There are photographs of some Republicans in the collection as well, such as Senator Jesse Helms, and Governors Jim Holshouser and Jim Martin. But for much of Morton’s life, North Carolina was a one-party state dominated by Democrats, with most of the ideological battles taking place within the various factions of the Democratic Party. 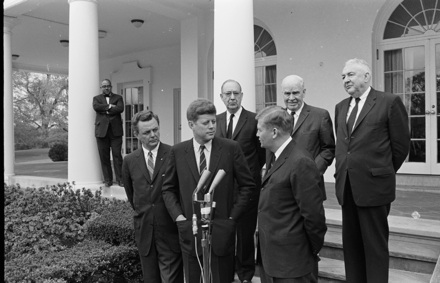 Morton was centrist businessman, not an ideologue, happy to work with liberals such as Kerr Scott and Terry Sanford and more centrists such as Luther Hodges and Jim Hunt. The group of post-war governors was instrumental in creating the Research Triangle Park, the state community college system, the school for the arts in Winston-Salem, and the residential math and science school in Durham among other innovations. Such initiatives made North Carolina a model for much of the rest of the South among moderate Democrats such as Bill Clinton of Arkansas and Bill Winter of Mississippi.
When he ran for governor, Morton campaigned as a fresh faced moderate. In 1972, North Carolina’s schools were undergoing significant racial integration for the first time and Morton preached calm. The solution to education, Morton said, “lies in new moderate leadership which will bring new resources to our schools and will our people together at the table of good will.”
Always a promoter of North Carolina’s natural beauty, Morton became concerned in the early 1990’s about the pollution resulting the Tennessee Valley Authority’s 13 coal-burning power plants. Morton lent his voice to the conservation cause including producing documentary about the effects of pollution, narrated by former CBS anchor Walter Cronkite, which helped inspire the passage by the state legislature of the Clean Smokestacks bill in 2002.
Despite the aid of pretty girls, country singers, and helicopters, Morton never succeeded in becoming governor. But for a half of a century, he not only captured the state’s political elite in his lens, but helped influence their policies.
–Rob Christensen

9 thoughts on “Hugh Morton Among the Movers and Shakers”