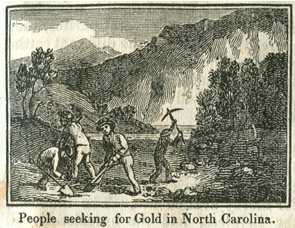 After nearly a century of production, the Reed Gold Mine in Cabarrus County had been pretty much exhausted. By the end of the 19th century, most prospectors had left for more promising sites in Colorado and Alaska. Jake Shinn was one of a few hopeful miners remaining in North Carolina. On April 9, 1896, Shinn had dug only about three feet deep when he hit something hard. He pulled a big rock out of the ground, shouted, “Boys, I’ve got it!” and rushed to wash off the dirt. The other miners, accustomed to false alarms, paid little attention to Shinn until he returned from the creek carrying a 22-pound gold nugget. At the time of its discovery, it was said to be worth about $4,800; at today’s gold prices, that single rock would sell for more than $100,000.

The first documented discovery of gold in North Carolina occurred nearly a half century before the discovery of gold at Sutter’s Mill in California touched off the nation’s most famous gold rush. John Reed (born Johannes Reith) arrived in America as a Hessian soldier in the service of the British Army during the Revolutionary War. After he left the army he settled on a farm in Cabarrus County, North Carolina, about 20 miles from Charlotte. In 1799, Reed’s son Conrad found a shiny yellow rock in the creek on the family property. The rock was used as a doorstop for several years until Reed took it to a jeweler in Fayetteville who informed him that he had been holding open his door with a 17-pound gold nugget. The jeweler offered to purchase it at whatever price Reed named, which he did, leaving the farmer to return home three dollars and fifty cents richer.

Reed soon realized that he had let his soon-to-be famous doorstop go for significantly less than it was worth, but he knew that there were other yellow rocks in his creek. Reed formed a partnership with a few others and began a mining company. The Reed Gold Mine was significant not only for being the first American gold mine, but also for the size of the nuggets that it produced. The largest one, found by a slave named Peter in 1803, was said to weigh 28 pounds. Gold fever struck the state. By 1830 there were 56 gold mines and gold mining was second only to agriculture in the number of North Carolinians it employed. A map of North Carolina circa 1849 prominently featured an inset map of the “Gold Region,” and long before California earned the nickname, North Carolina was known as the “Golden State.” Jake Shinn’s discovery in 1896 renewed interest in the lagging mining industry, but his was the last big strike. Gold mining in the state dwindled through the 20th century until the last operation closed in 1964.

The Reed Gold Mine State Historic Site is now operated by the North Carolina Office of Archives and History and is open to the public. The North Carolina Collection Gallery, in Wilson Library at the University of North Carolina at Chapel Hill, has a small exhibit on the state’s gold mining history, including a display of rare Bechtler gold coins, which were minted in North Carolina in the mid-1800s.