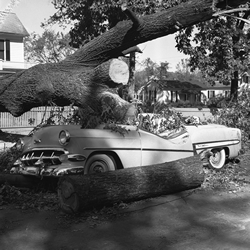 Fifty years ago this month, North Carolina was hit by Hurricane Hazel, at the time the greatest natural disaster in the state’s history. On the morning of October 15, 1954, Hazel slammed into the coast near the border between North Carolina and South Carolina, a strong category four storm packing winds of 155 miles per hour. Beachfront property along the southeastern coast was decimated, leaving entire sections where not a single structure was left standing. The storm moved due north, continuing to inflict damage. In Wilson, there were gusts of up to one hundred miles per hour and even in Chapel Hill, more than 150 miles from the coast, the storm remained strong, bringing sixty-eight mile per hour winds, uprooting trees, destroying homes, and dumping about four and a half inches of rain on the town.

The damage done by Hazel was catastrophic. Nineteen North Carolinians were killed, fifteen thousand buildings were destroyed, and thirty-nine thousand more were damaged. Thirty North Carolina counties were affected by the storm. Although some recent hurricanes have rivaled Hazel in the amount of damage measured in financial terms, none have topped its strength. In the fifty years since Hazel, no other storm at a strength of category four or higher has reached North Carolina.