On the 18th of March, 1863, the streets of Salisbury, North Carolina, were invaded by a group of about 50 determined local women, identified only as wives and mothers of Confederate soldiers. The women believed that local merchants had been profiteering by raising the prices of necessary foods and demanded that the merchants sell these goods at government prices. When the merchants refused the women broke down one shop door with hatchets and threatened other storekeepers. What a local newspaper described as the “Female Raid” netted the women twenty three barrels of flour as well as quantities of molasses, salt, and even twenty dollars in cash.

The Salisbury “Bread Riot,” and the more widely known food riot in Richmond, Virginia, also in 1863, are dramatic evidence of the stresses on local life brought on by the Civil War. Volunteers for the Confederate army from Salisbury and surrounding Rowan County at the beginning of the war were by and large young, unmarried men. In 1862 demand for fresh troops brought about the increasing enlistment of older men with wives and families. In a county such as Rowan, with a large number of small farms, the absence of a husband and father was a serious economic loss. The failure of the county’s attempt to provide for soldiers’ families also contributed to the hardship. The fact that the women involved in the incident were never prosecuted is evidence of the understanding and sympathy of their neighbors. The Carolina Watchman, which reported the incident, extended its most scathing criticism not to the women, but to the county commissioners who failed to provide adequate aid for soldiers’ families and who should “go, all blushing with shame for the scene enacted in our streets on Wednesday last.” 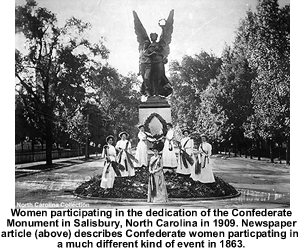