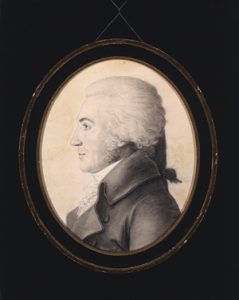 William Richardson Davie, the “Father of the University of North Carolina,” was born on June 22, 1756, in the Parish of Egremont, County Cumberland, England.

His parents, Archibald and Mary Richardson Davie, were Scottish but had moved to the northwest of England prior to his birth. The future soldier and statesman immigrated with his parents and siblings to the Waxhaws region of South Carolina around the time he was eight years old.

The exact reasons for the Davie family leaving England are open to speculation. Some conjecture has centered on Davie’s uncle and namesake, William Richardson. Coming to America in the early 1750s, Richardson was ordained by the Presbyterian Church in 1758. After a brief mission trip among the Cherokee Indians, he accepted a call to serve the Waxhaw Presbyterian Church in Craven County, South Carolina.

Richardson wisely invested and nurtured an inheritance and his income as minister, so by the early 1760s he was a well-established member of the Waxhaws area. This material prosperity, however, did not diminish Richardson’s disappointment that he and his wife remained childless. In an attempt to fill the void, Richardson convinced his sister, Mary, and her family to move to the backcountry of South Carolina in 1764.

Davie enjoyed a comfortable childhood and the beginnings of a classical education while growing up near his uncle. He attended Queen’s College, later Queen’s Museum, in Charlotte before enrolling in the College of New Jersey (now known as Princeton University). Graduating in 1776, Davie moved to Salisbury, North Carolina, to study law in the office of Spruce Macay. The mounting conflict of the Revolutionary War forced Davie to suspend his studies and immediately involve himself as a Whig partisan fighter in the North Carolina Piedmont. Eventually, he would climb to the rank of commissary general, serving Nathaniel Greene’s Southern Army during the last years of hostilities.

As did many Revolutionary War leaders, Davie translated military success and prowess on the battlefield into achievement in the world of politics. After the conflict, he moved to Halifax, North Carolina, to practice law and was elected as a representative to the General Assembly. In 1787 he was selected by the legislature as one of North Carolina’s delegates to the Federal Convention in Philadelphia, which drafted the United States Constitution. Although Davie did not stay to sign the final document, he successfully fought for North Carolina’s eventual ratification.

It was in the General Assembly, however, that Davie would earn the title by which he is still known today. He proved to be the major force in satisfying the requirements of Section 41 of North Carolina’s constitution, which stated, “all usefull [sic] learning shall be duly encouraged and promoted in one or more universities.”

In 1789 Davie introduced a bill to establish the University of North Carolina and led the charge to secure its passage. Furthermore, his involvement with the University did not end with its creation: he served on the Board of Trustees, presided at the cornerstone laying ceremony of the first building, helped to formulate its first curriculum, consulted on selecting faculty members, procured additional financial support, donated books and other artifacts, and took part in the many other activities needed to launch the University. Even after moving back to South Carolina in late 1804, Davie continued to correspond with and give advice to the University’s trustees.

Although Davie would go on to serve as North Carolina’s governor from 1798 to 1799 and as a minister plenipotentiary to France from 1799 to 1800, his main contribution to his adopted country and state remains as “Father” of the nation’s first public university.