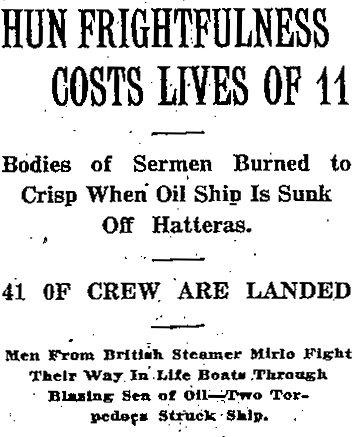 The Atlantic waters off the Outer Banks of North Carolina are infamous for shipwrecks. More than six hundred vessels have been lost in this “Graveyard of the Atlantic” to a combination of strong currents, dangerous shoals, and sudden storms. In wartime, particularly during the twentiety century, human malice exceeded even natural catastrophe as a destroyer of ships and sailors.

In both World War I and World War II German submarines found the vicinity of the banks a rich hunting ground and almost 100 ships were lost. Through the first half of the nineteenth century aid to ships and seamen wrecked on the Outer Banks came from local people acting as the need arose. In 1789 the Federal government assumed responsibility for the construction of a string of lighthouses along the North Carolina coast from Cape Hatteras to Cape Fear.

In addition to the lighthouses, seven lifesaving stations were constructed along the coast from Currituck Beach in the north to Little Kinnakeet in the south. At each location a station keeper and at least six surfmen remained ready around the clock to go to the aid of ships in distress. The lifesaving crews operated from the beach piloting heavy lifeboats through the surf and out to stricken vessels to save passengers and crew.

Of the many daring rescues attempted by the Lifesaving Service one of the most famous involved the sinking of the British tanker Mirlo on August 16, 1918, off of the shores of Bodie Island. The Mirlo was working its way up the North Carolina coast bound for Norfolk with a load of gasoline from New Orleans. She safely passed Cape Hatteras and was near Wimble Shoals off Bodie Island when she struck a mine layed by the German submarine U-117.

The resulting explosion was seen by Captain John Allen Midgett and the crew of the Chicamacomico Lifesaving Station. Midgett and his men launched their power lifeboat through the surf into a rising wind and made for the Mirlo. Two boats had been launched successfully from the ship, but a third had capsized and remained floating upside down near the Mirlo with a number of desperate sailors clinging to the keel as burning gasoline from the sinking ship spread steadily nearer.

Captain Midgett found a narrow lane in the flaming sea and guided his boat along it until it reached the overturned craft. The sailors were taken safely aboard, and the Chicamacomico lifeboat moved out of the burning gasoline, located the other two boats and brought all three to safety on the beach. For their courageous action and superb seamanship, Captain Midgett and his crew were awarded Gold Lifesaving Medals of Honor from the United States and Victory Medals from the government of Great Britain. Later the men of the Chicamacomico Station received Grand Crosses of the American Cross of honor from the United States Coast Guard.

The Lifesaving Stations were abandoned by the Coast Guard after World War II in favor of more modern and sophisticated tools and methods of aiding ships in distress. The Chicamacomico Station, however, has been carefully restored and stands as a monument to the brave surfmen of the Lifesaving Service.