Recent editions of the Polk City Directory include a “Movers & Shakers Section.” We’re guessing that this section was compiled to appeal to marketers trying to reach people described by the publisher as “the most affluent individuals, professionals, business owners and key executives within the community.” Since librarians are, typically, neither affluent nor would we be described as “key executives,” we were surprised to find a few of our colleagues listed as Movers & Shakers. We always knew how important our work was, but it’s nice to see it confirmed in print.

Are you a “Mover & Shaker”? Polk City Directories are available for most larger towns and cities in North Carolina. Stop by your local library or contact us at the North Carolina Collection to see if there’s a directory for your community.

Nearing the end of their state tour in 1925, the Carolina Playmakers, traveling in their “Playmakers Special,” narrowly escaped a disastrous crash on the road near Valdez, between Morganton and Hickory. Nobody was hurt, and after the bus was pulled back onto the road by a Standard Oil truck (see the photo below), the troupe made it on time to their performance that night in Greensboro.

One of the little-known treasures in the North Carolina Collection is the impressive collection of scrapbooks documenting the early history of the Carolina Playmakers. Frederick Koch, the pioneering faculty member who brought the idea of a folk drama to the University of North Carolina, maintained scrapbooks filled with programs, letters, newspaper clippings, and photographs about the group. We found these two photographs in a volume from 1926. When the season ended in Chapel Hill, the Playmakers went on the road, travelling in their own bus. These photos were probably taken in western North Carolina.

While perusing the North Carolina Collection’s massive collection of newspaper clippings, we came upon an odd subject heading: “Lying-In-Road Deaths.” We went to the clippings and found two articles from 1986 reporting on a study by Dr. Lawrence Harris, a medical examiner in Greenville, who reported that between 1980 and 1984, 136 North Carolinians were killed while lying in the road. This bizarre phenomenon was a little easier to understand when we read that 85 percent of the victims were heavily intoxicated at the time of their death. Apparently in the majority of the cases the victim was walking home after a bout of heavy drinking, caught cold, and decided to lay down on the warm paved road.

Although not unique to North Carolina, we seem to have had far more lying-in-road deaths than any other state. Georgia was second on the list, but with only forty percent of North Carolina’s total. In an editorial under the headline “Liquored Up, Smashed Flat,” the Wilmington Star-News asked “Why us, why here?” Dr. Harris speculated that the high rate of what columnist Hal Crowther called “tragic human possums” in North Carolina had something to do with the prevalence of warm weather, alcohol abuse, and poverty.

There were no more clippings on the topic in our files after 1986, so we can’t report on whether or not things have improved since then. We think a follow-up study is in order.

With a new state lottery about to begin, we decided to have a look at Alan D. Watson’s article, “The Lottery in Early North Carolina” (North Carolina Historical Review, October 1992) to see how it worked a few centuries ago.

Watson pointed us to the early laws of North Carolina, which contained a provision for a lottery as early as 1760. The act allowed four Managers to organize a lottery to raise money to finish the construction of churches in Wilmington and Brunswick. It was noted that an earlier lottery had been tried but failed due to “the Scarcity of Proclamation Money in this part of the Province.” The new act allowed players in the lottery (referred to as “adventurers”) to buy tickets with only a written promise of payment. The price for the ticket was pretty steep for a somewhat meager payment, at least by PowerBall standards. For three pounds, you could purchase a ticket giving you a chance at a grand prize of four hundred pounds. In order to supplement the money raised by the lottery, the state would also allow the churches to use money obtained from the sale of slaves captured from a wrecked Spanish privateer.

We’ve recently discussed a couple of North Carolinians — George Badger and John J. Parker — who failed to be confirmed by the Senate after being nominated for the Supreme Court. We should point out that not every Tar Heel proposed for the Court has met with this fate. It’s just been a little while since one of our fellow North Staters has been confirmed. James Iredell was the first Supreme Court Justice from North Carolina, serving on the court from 1790-1799. After the death of Iredell, New Hanover County native Alfred Moore was nominated by President John Adams and confirmed by the Senate. Moore sat on the Court until 1804.

Iredell is the subject of a recent biography by Willis P. Whichard (Justice James Iredell, published by Carolina Academic Press, 2000). There is still no full-length biography of Moore, but interested readers can look to a shorter sketch by Robert Mason, Namesake: Alfred Moore, 1755-1810, Soldier and Jurist, published by the Moore County Historical Association in 1989.

The North Carolina Arts Council, in cooperation with the state poet laureate, Kathryn Stripling Byer, is featuring a “Poet of the Week” on its website.

On November 3, 1979, members of the Communist Workers Party (known then as the Worker’s Viewpoint Organization) sponsored a rally at Morningside Homes, a housing project in Greensboro. Billed Klan Kills Five Headlineas a “Death to the Klan Rally,” the demonstrators gathered to speak out against what they saw as continued racial injustice in North Carolina.
A group of self-proclaimed Klansmen and Nazis attended the rally and fired upon the crowd, killing five people and wounding nine. Much of the violence was captured on film by reporters who were covering the event.

The men accused of firing on the crowd were apprehended and charged with murder. In November 1980 a jury found them not guilty on the grounds of self-defense. After extensive FBI inquiries into the killings, the case was reopened and, in 1983, nine people were indicted for conspiracy to violate the protesters’ civil rights. Again, the defendants were acquitted.

In addition to their outrage at the violence in their community, many people in Greensboro blamed the police department for failing to act promptly enough to prevent the killings. The frustration in the community continued to grow as the courts failed to convict anyone for the shootings. 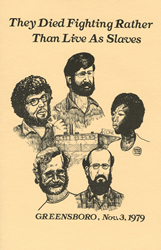 At the twentieth anniversary of the killings in 1999, it was clear that tensions in Greensboro still ran high and that there were many unresolved feelings and accusations surrounding the case. A Truth & Reconciliation Commission, modeled on similar projects in South Africa, was established in 2004. The Commission began holding public hearings on the 1979 killings, operating under the principle that the community cannot begin to heal until the events of the past are honestly and openly confronted. The final report of the Commission is due in 2006.

“They Died Fighting Rather Than Live As Slaves.” Card produced by the Committee to Avenge the Greensboro-CWP 5, [1979]. Greensboro Massacre Materials, North Carolina Collection, University of North Carolina at Chapel Hill.

The latest This Month in North Carolina History feature looks at the events of November 3, 1979, when members of the Communist Worker’s Party clashed with the Ku Klux Klan in Greensboro. The current work of groups like the Greensboro Truth & Reconciliation Commission reminds us that our history is more than dry details and dates relegated to textbooks, that in fact it is a vital part of the world we live in today.