George Washington Vanderbilt was the youngest of his parents’ eight children. Because of the age difference between George and his siblings, some of his closest family ties were with his nieces and nephews. One niece, Edith Shepard Fabbri, visited Biltmore in late 1905 with her husband, Ernesto G. Fabbri, and their two children. Ernesto Fabbri, described in his New York Times obituary as a “world traveler, linguist, and former president of the Society of Italian Immigrants in New York,” was the heir of Egisto Fabbri, a J.P. Morgan partner. He and Edith Vanderbilt Shepard were married in 1897 and divorced in 1923.

Apparently, Fabbri was an amateur photographer. The North Carolina Collection recently purchased an album of photographs that Fabbri made during that 1905 visit to Biltmore. The seventeen large (7 1/2 x 9 1/2 inch) photographs include images of the exterior of the mansion, the model village, farm buildings and animals, and the ferry across the French Broad. The final image in the album shows George Vanderbilt’s wife, Edith Dresser Vanderbilt, setting up her camera on a hillside on the estate. Several of the images appeared in Ellen Erwin Rickman’s Biltmore Estate (Arcadia Publishing, 2005), but most have not been published. The first image in the album is shown here.

This is a great season for reading North Carolina literature, with new novels by some of the state’s most respected writers coming out within a few weeks of each other. Lee Smith’s On Agate Hill, set in Civil War era Hillsborough, has just been released and Doug Marlette’s Magic Time comes out this week. Follow the links from each title for recent reviews in the Charlotte Observer.

As an undergraduate I took a “Weather and Climate” class, which I have to admit was one of my favorites. I don’t remember everything we discussed, but I definitely do remember that precipitation has nothing to do with radio waves in the air. This fact was called to doubt, however, as I was reviewing the Biblical Recorder (which was and is published in Raleigh) for another subject. In its “Current Topics” section for 2 June 1926 I found a piece titled “Is the Radio to Blame?” In the late spring of 1926, sections of the United States were experiencing a severe drought–the worst in forty years, and the Recorder reports that Thomas Edison blamed radio waves for the lack of rain. He believed that “moisture [was] being absorbed from the air by the radio, thus preventing the formation of rain clouds.” The Recorder went on to say that coming from Edison this theory was worthy of consideration and “it would be better to abolish [the radio] than have the earth parched as it has been for the past two months.”

This great advertisement is from a promotional brochure published by the Chesapeake and Ohio lines — the “C and O.” I ran across the brochure in a volume labeled simply “Miscellaneous Pamphlets.” The volume bears the signature and date “R.G. Cherry October 10 1931.” At the time, Cherry was in his first term in the North Carolina House of Representatives. Fourteen years later he was elected Governor of North Carolina.

Today’s Asheville Citizen-Times reports on the recent Bigfoot sightings in Madison County. Apparently, Sasquatch himself has appeared around the mountain town of Hot Springs. This is exciting news indeed, but I was most impressed to learn that this is not Bigfoot’s first visit to our state. The Bigfoot Field Researchers Organization has an excellent website documenting all known sightings, which are arranged by state. The North Carolina page lists 42 Bigfoot sightings in the Tar Heel state. Predictably, he has shown up most often in the mountain regions of North Carolina, but has popped up a few times in other parts of the state, including Mocksville in Davie County and at Camp Lejeune in Onslow County.

Our friends at the North Carolina Office of Archives & History have just released an impressive new website at http://ncmarkers.com. The site taps into a database of information about the North Carolina Historical Marker Program — those black and silver signs scattered along highways around the state denoting historic people and events. Users of the new site can search by keyword, browse by county or subject, and, in many cases, see a picture of the actual sign and read a short essay giving more information on the topic.

You’ll find this site especially handy if, like me, you’ve found yourself so caught up in reading one of the historic markers that you nearly drifted into oncoming traffic. Now that I know I can find the text online later, I’ll keep both eyes on the road.

I’ve just been looking through John T. Edge’s latest, Donuts: An American Passion. Despite the fact that there are no North Carolina places listed in his “Black Book of Donut Shops” (the closest place to us is Mulligan’s in suburban Atlanta), that hardly means we’re suffering a donut deficiency here. Of course, everyone knows that North Carolina is home to the headquarters of Krispy Kreme, but we can also be proud of the Tar Heel roots of the Doughnut Plant, which is currently producing some of the most delectable donuts in New York City.

The Doughnut Plant was started in 1994 by the grandson of Herman Isreal, who operated the College Pastry Shop in Greensboro for decades. The store on Tate Street was a popular hangout for students from Women’s College from the 1930s through the 1960s. Isreal’s grandson came across the recipe for the donuts in the early 1990s, made a batch, and before long people throughout New York were discovering what students and alumna of Women’s College had known for years: these donuts were something special. The whole story is on the Donut Plant website.

Since the Doughnut Plant seems to be doing well these days, I think it’s time the owners honored their roots and opened a branch back in North Carolina. It doesn’t necessarily have to be in Greensboro. Something in my neighborhood would be just fine.

Does any other state have as many literary festivals as North Carolina? We knew about the big North Carolina Literary Festival held every other year in the Triangle, and the annual Novello Festival in Charlotte, but we just learned about another one. The Carolina Mountains Literary Festival will be held September 15-16 in Burnsville. They have an impressive number of authors scheduled to attend, including Sharyn McCrumb, Joan Medlicott, and John Ehle. 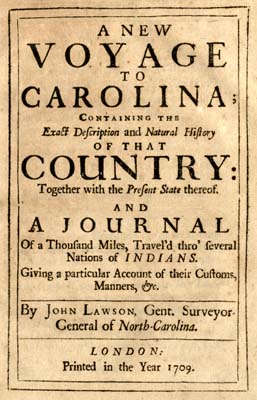 In the late summer of 1711, John Lawson, Surveyor-General of North Carolina, and Baron Christoph von Graffenried, a Swiss aristocrat, began what should have been a short, uneventful trip up the Neuse River. Lawson assured his companion that they would have no trouble with the Native Americans in the area, but by early September, the men were in the custody of a group of Tuscaroras and by the 16th, Lawson was dead.

Von Graffenried lived to tell the tale of their imprisonment, so much of what is known about Lawson’s death comes from his partner’s version of the event. Although initially the Native Americans merely questioned the two men about the purpose of their journey and had decided to set both of them free, they changed their minds when Lawson began quarreling with a Tuscarora chief. Von Graffenried managed to convince the Tuscaroras that Lawson did not speak for him and that he himself was under the protection of the Queen of England who would be sure to avenge his death. Von Graffenried was not present at the execution. Some versions of his account say that Lawson was burned to death, while others state that the Native Americans slit his throat. John Lawson may be considered the first casualty in what is known now as the Tuscarora War, a conflict that almost drove the Europeans from North Carolina and virtually destroyed the Tuscaroras.

In Lawson, the Native Americans lost one of their most sympathetic observers among the new settlers. During his journeys of exploration in South Carolina, North Carolina, Virginia, and possibly Pennsylvania, he studied not only the plants and animals of the new world, but also the cultures of its established peoples. Lawson attempted to be an objective chronicler of Native American customs, taking care to distinguish between the different nations. He collected American plants for a London botanist named James Petiver throughout his residence in the Carolinas, but Lawson’s own interests were much broader. He succeeded in combining those interests with the interests of Carolina’s owners, the Lords Proprietors, and soon after his arrival in Charlestown in late 1700, he was directed by the Proprietors to investigate the unsettled interior of Carolina. They later appointed him Surveyor-General of North Carolina and a member of the commission to determine the boundary between North Carolina and Virginia. These appointments gave him the opportunity to study the natural history of the area, meet with a number of different, and usually friendly, Native American nations, and acquire some valuable tracts of land for himself.

After about nine years in America, Lawson returned briefly to England, where as a result of his travels, he was able to publish a map of the Carolinas and one of the most influential early works on the natural history of America, A New Voyage to Carolina, in which he describes his journeys and findings. The book was published under a number of titles in the early eighteenth century in English and in German. It inspired many other explorers and naturalists, some of whom copied from it directly. Lawson was also concerned with promoting the settlement of North Carolina and was involved with the founding of both Bath and New Bern, the latter with Graffenried. He himself owned large tracts of land in the area of the two towns. While in London, he encouraged others, especially groups of European refugees living in England, to move to the colony. Despite his interest in and sympathy for the Native Americans, Lawson’s promotion of the growth of the colony was antithetical to their interests. His attempts to understand their culture did little to mitigate their perception that he was also destroying it.