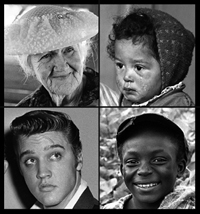 I should point out that we are aware that Elvis Presley was not a North Carolinian. Nonetheless, there is a fantastic early portrait of him in “Carolina Faces,” an exhibit of photographs by Don Sturkey on display now in the North Carolina Collection Gallery. The Elvis photograph shows the young singer outside of the Charlotte Coliseum before a concert there in 1956.

Sturkey was a longtime photographer for the Charlotte Observer and was named the national newspaper photographer of the year in 1961. The exhibit up now displays a broad selection of compelling, personal images from Sturkey’s collection. Don Sturkey will give a free public lecture in conjunction with the exhibition on Thursday, March 22, at 5:45 p.m. in Wilson Library.

Today’s News and Observer tells us about an exciting new offering at the N.C. Museum of History: Barbecue 101: A Southern Delicacy. The course is designed to introduce newcomers to the state to what is certainly the highest culinary achievement of North Carolinians. The course will be taught by Bob Garner, the reigning authority on North Carolina barbecue. His book North Carolina Barbecue: Flavored by Time is the authoritative history of barbecue in the state, and a comforting read for Tar Heels far from home. I relied on the recipe in Garner’s book to cook a pork shoulder in the alley behind the house I was living in in Cambridge, Massachusetts several years ago. The results were delicious — perhaps not quite up to par with Stamey’s, but a far sight better than anything you could get in New England.

Once Garner has finished educating the newcomers, I hope he’ll consider offering Barbecue 201 for those of us who have mastered the basics but still want to expand our knowledge and appreciation of the porcine offerings of our state.

George Washington’s birthday used to be the cause for much larger celebrations and observances than we see today. The image shown here is the cover from a pamphlet produced by the North Carolina Department of Instruction to give school teachers “material not only for [the] Washington Day Program, but for teaching the spirit of America in the public schools of the state.”

Published in 1918, the 64-page pamphlet contains patriotic poems and songs, and many readings about the country’s current involvement in World War I, including President Woodrow Wilson’s war message, sections about the Army and the Red Cross, and a tribute to North Carolinian Josephus Daniels, who was serving at the time as the Secretary of the Navy.

This postcard was never sent, so there’s no postmark to give us an idea of when it was produced. I’m guessing that it was published around the late 1910s or 1920s. Although we have some pretty high-tech digitization equipment in Wilson Library, we were unable to zoom in closely enough to determine whether or not there is any tomato in the barbecue sauce.

Yesterday the University of North Carolina at Chapel Hill renamed one of its new student dormitories after George Moses Horton, a slave from Chatham County. It is thought to be the first building on a Southern college campus to be named for a former slave.

Horton became the first African American to publish a book in the South when a collection of his poems, The Hope of Liberty, was published in 1829. A later collection, The Poetical Works of George M. Horton, The Colored Bard of North Carolina (1845), included a short biographical introduction in which the author described his beginnings as a poet:

Having got in the way of carrying fruit to the college at Chapel Hill on the Sabbath, the collegians who, for their diversion, were fond of pranking with the country servants who resorted there for the same purpose that I did, began also to prank with me. But somehow or other they discovered a spark of genius in me, either by discourse or other means, which excited their curiosity, and they often eagerly insisted on me to spout, as they called it . . . Hence I abandoned my foolish harangues, and began to speak of poetry, which lifted these still higher on the wing of astonishment; all eyes were on me, and all ears were open. Many were at first incredulous; but the experiment of acrostics established it as an incontestable fact. Hence my fame soon circulated like a stream throughout the college. Many of these acrostics I composed at the handle of the plough, and retained them in my head, (being unable to write,) until an opportunity offered, when I dictated, whilst one of the gentlemen would serve as my emanuensis. I have composed love pieces in verse for courtiers from all parts of the state, and acrostics on the names of many of the tip top belles of Virginia, South Carolina and Georgia.

Both of these volumes have been digitized by Documenting the American South.

The renaming of the dormitory is part of a recent resurgence of scholarly and popular interest in Horton. He was inducted into the North Carolina Literary Hall of Fame in 1996, an authoritative biography by Joan R. Sherman was published by UNC Press in 1997, he was featured in the UNC Manuscripts Department’s exhibit “Slavery and the Making of the University,” and the North Carolina Highway Historical Marker Program has just placed a marker honoring Horton.

Horton did not see this kind of recognition or appreciation during his lifetime. Even after publishing two volumes of poetry he was not freed from slavery until the Emancipation Proclamation in 1863. Horton left North Carolina in 1865, following a Michigan regiment north. He later settled in Philadelphia. It is not known how or when he died.

Just when it looks like Thomas Wolfe is about to drop out of the canon, he pops back up again. As the holder of the largest published collection of works by and about Wolfe, the North Carolina Collection keeps an eye on all things Wolfean and we were excited to learn that the Asheville native’s works would soon be published by the Library of America. The latest Library of America e-Newsletter reports that in a reader survey asking what authors currently missing from the series should be included, Wolfe was among the top twenty mentioned, along with Ernest Hemingway and F. Scott Fitzgerald, both fellow Scribner’s authors and proteges of Maxwell Perkins. There is no word yet on when the Wolfe volumes will appear.

How many novels contain a scene like this: a reader opens an old book and finds stuck between its pages a document that illuminates an obscure past? In reality, most of what we find tucked into old books are grocery lists, gum wrappers, scraps of paper used for bookmarks, and other detritus of everyday life. The most memorable item that I’ve ever found was a daisy chain of clover.

Jenny Townes, a graduate student who works in the North Carolina Collection, recently came across a much more important find. While she was processing a collection of books once owned by the late Archie K. Davis, Jenny removed a large number of envelopes and receipts from a copy of The Revised Statutes of the State of North Carolina, Passed by the General Assembly at the Session of 1836-7. One of the envelopes contained a letter to Mrs. Jeannette Conrad from a woman who identified herself as “a former servant.” The letter-writer, Judy Coonnard, asked Mrs. Conrad’s help in locating her children. What Jenny had found was a letter documenting the efforts of one former slave to reunite with her children.

We welcome any information that you might have on the people whose names appear in this letter. 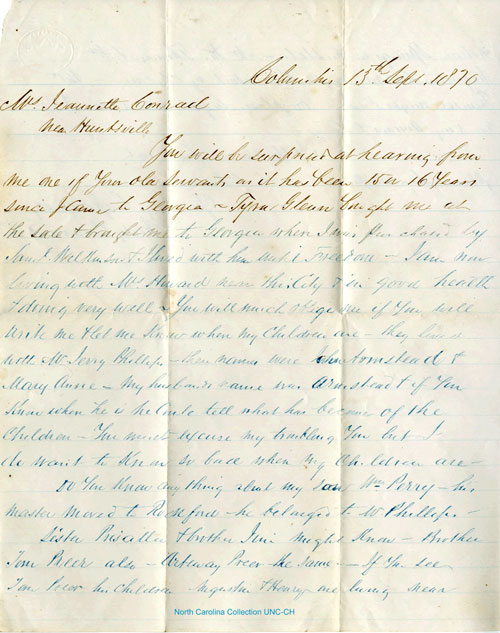 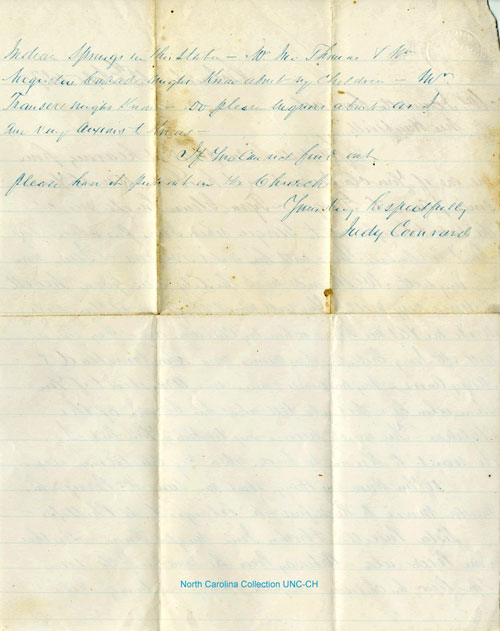 This being Groundhog Day, wouldn’t it be a fine time to tune up your dulcimer and belt out a mountain classic? The old folk song “Groundhog” has been recorded by a number of people, including Merle Travis, Doc Watson, and Washboard Sam. In case the lyrics have slipped your mind, here they are:

Get up your guns and call up your dogs;
Going to the mountains to catch a
Groundhog.

Two in a stump and one in a log;
Don’t I wish I had a dog –
Groundhog.

Yonder comes Sal with a snigger and a grin,
With groundhog grease all over her chin –
Groundhog.

Yonder comes Sal with a great long pole
To punch that groundhog out of his hole –
Groundhog.

Joe, go tell Ma to get the gun and come,
‘Cause that groundhog got me by the thumb –
Groundhog.

These lyrics were taken from a version of the song sung by Nathan Hicks of Sugar Grove, N.C. in 1933 and published in the book Beech Mountain Folk-Songs and Ballads (Schirmer, 1936). I have a feeling that they won’t be serenading Sir Walter Wally with this one today.

On February 10, 1885, the state of North Carolina legally recognized the identity of the “Indians of Robeson County,” a milestone in the history of the tribe now known as the Lumbee. One scholar has identified no fewer than seven theories about the origins of the Lumbees, many of which are still debated today. In fact the law of 1885 referred to them as Croatan Indians, reflecting the idea that they descended from the settlers of the “Lost Colony.” Over the years, the Native American community in southeastern North Carolina, who usually referred to themselves as “Our People” or “the Indians,” adopted an old version of the name of the river on which their ancestors had settled, Lumbee.

In the increasingly polarized racial environment of the ante-bellum south, the Lumbees found it difficult to maintain their identity as Native Americans. Since they were not a recognized tribe, they were pushed to declare themselves either white or free persons of color, neither of which was acceptable to them. The situation became acute after the Civil War when, in 1875, North Carolina began building a new, racially segregated, public school system. No schools were planned for Native Americans, and Lumbees faced the choice of giving up their Native American identity or denying public education to their children. The next ten years—”the decade of despair” for the Lumbees—ended when Hamilton McMillan, a representative from Robeson County, shepherded through the General Assembly a bill recognizing the Lumbees legally and providing for public schools for their children.

Thus there emerged in Robeson County a rare three-part public school system providing schools for white, African American, and Native American children. By the time Robeson County schools were integrated in 1970, separate educational facilities for Native Americans were provided at the grammar school, junior high school, and high school levels. In 1887 the General Assembly provided money for the establishment of an Indian Normal School to train teachers for the Native American public schools. In 1941 it became Pembroke State College for Indians and is now the University of North Carolina at Pembroke.