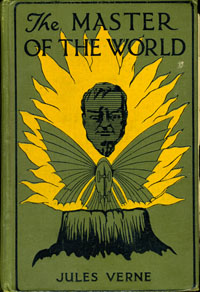 One of the surprises lurking in the stacks of the North Carolina Collection is Master of the World by Jules Verne. We have both the original French edition and an English translation. Sacre bleu, you say. What does the creator of Captain Nemo and his submarine, Nautilus, have to do with North Carolina? Verne never visited North Carolina, and, in fact, seldom journeyed far from his home in Amiens. The settings of his novels, however, range widely over the face of the earth, and Master of the World is set, in part, in western North Carolina. There folks are in a tizzy, in Verne’s story, because strange explosions and eruptions of smoke on top of a mountain called “The Great Eyrie” suggest that the mountain may be a volcano coming to life. An intrepid party climbs to the top of the mountain and finds, not a volcano, but a villain. Robur, an ambitious and somewhat twisted genius, has built a workshop on the flat top of the mountain where he has constructed the Terror – a combination automobile, ship, submarine, and airplane. With his invention he plans – you guessed it – to conquer the world! I leave you to follow the rest of the story.

“The Great Eyrie,” which is pictured on the cover of our English translation, bears a strong resemblance to Pilot Mountain, although Verne has moved it far from its real home. North Carolinians will be struck as well by other oddities. For instance, Verne vividly describes the Spanish moss growing in the trees in the vicinity of Morganton! Richard Walser and E. T. Malone, authors of the 1986 edition of Literary North Carolina, suggest that Verne may have been inspired by newspaper accounts of earthquakes that shook Rutherford and Burke counties in 1874. He then filled in the details from reference works (none too accurate) available to him in France. Judge for yourself. See you on the Great Eyrie.

One thought on “Jules Verne in North Carolina”