Major anniversaries of historic events inspire us to look back not just at the event itself, but at the way we commemorated it in the past. I found this stamp on a postcard mailed in 1907, marking the 300th anniversary of the first permanent English settlement in North America. 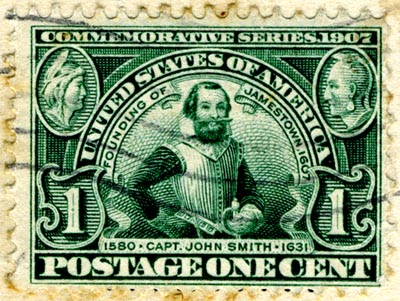 As Virginia celebrates the 400th anniversary of the founding of Jamestown, the U.S. Postal Service will issue a new commemorative stamp, showing neither John Smith nor imagined views of Native North Americans, but the three ships in which the British arrived. Much has changed since 1907, not least of which is the price of stamps.