I have to admit that I thought biological warfare was a 20th-century invention, but after a little research, I have discovered that it has been around for quite some time.

During the Revolutionary War, Brigadier General Jethro Sumner wrote to Major General Horatio Gates to inform him that:

“A Woman who passed about 15 days ago I am apprehensive has proceeded towards Hillsborough, from the enemy, with the small-pox. I doubt not but she has been sent on purpose to spread that Contagion among the Troops. The Ferry man at this ford, I am informed by Doctor Pasteur & Alexander, whom I sent to examine him, has got it. I have had him removed, & shall take such precaution in my power to prevent the infection spreading.” 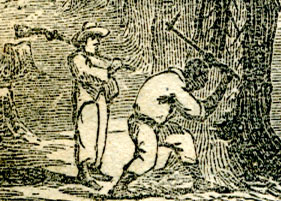 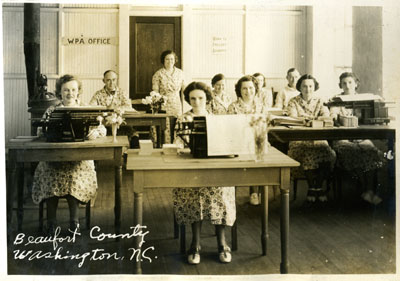 This photograph shows the Works Projects Administration office in Washington, N.C. in the late 1930s. The photo is from the Lee A. Wallace WPA Photo Album, an interesting collection of photographs documenting WPA projects throughout North Carolina in the late 1930s. Note the matching outfits on the office workers here — even the man in the back row has adopted the local uniform. 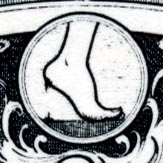 Romantic notions about our state’s nickname abound, many tied to tales of Civil War glory. If you take particular pride in the story that North Carolina earned its nickname from a group of brave soldiers who held off the enemy by refusing to retreat, fighting “as if they had tar on their heels,” then you might want to stop reading now.

The North Carolina Collection has just published online William S. Powell’s excellent piece, “What’s in A Name? Why We’re All Called Tar Heels.” Powell, author of the recent Encyclopedia of North Carolina and scores of other works of state and local history, examines the earliest uses of “Tar Heel” to refer to North Carolinians. His research led to the curious, but rather prosaic, explanation that in the early days of our state when tar was being produced from native pine trees for use in the shipping industry, a lot of folks simply couldn’t avoid getting it stuck to their feet.

North Carolina held its first presidential primary election on May 6, 1972. Prior to 1972, delegates were chosen to represent the state at the national party nominating conventions, but the candidates were not subject to a popular vote in North Carolina until the general election. North Carolina’s primary came toward the end of the 1972 election cycle, but was still ahead of a few large states including California and New Jersey. By early May the Republican nomination was wrapped up, with the great majority of voters continuing to support incumbent Richard Nixon, but the Democratic race was a different story.

When the 1972 Democratic Presidential campaign began, there were no clear leaders. U.S. Senators Edmund Muskie, Hubert Humphrey, and George McGovern were viewed as the establishment candidates, with McGovern eventually winning the nomination. In the South, however, two alternative candidates resonated with many voters. George Wallace, the Governor of Alabama was running for the second time and was a popular anti-establishment choice throughout the South, as well as in a few midwestern states. Shirley Chisolm, U.S. Representative from New York, was also running and, while not garnering enough votes to put her among the leaders, her candidacy appealed to many women and African Americans.

In early March, 1972, former North Carolina Governor Terry Sanford entered the race. Although the earliest primaries had already passed, there was no clear leader and Sanford saw the North Carolina primary as an opportunity to boost his candidacy. Eight years after leaving the Governor’s mansion, Terry Sanford remained a contentious figure in North Carolina. During his four years in office in the early 1960s he fought to expand and improve education in the state for all students, including African Americans, most of whom remained in poorly-funded segregated schools, and led an ambitious anti-poverty campaign. Sanford’s liberal agenda stood out when compared to other Southern governors, including George Wallace, who were elected on strict segregationist platforms.

The Sanford campaign organized quickly, opening a headquarters in Washington and beginning a nationwide campaign. Campaign literature portrayed Sanford as an outspoken progressive leader in the conservative South. His work for expanded Civil Rights and educational opportunities was highlighted, as was his position that the United States should not stay in Vietnam. However, he did show signs of trying to appeal to Southern voters, such as his proposition to limit the growth of the federal government and return more control to the states, and his contention that the South was growing too quickly and needed to “avoid the mistakes the North has made in industrialization.” While these policies, especially combined with the effective campaigning style of the charismatic Sanford, were effective in North Carolina in 1960, the response was very different in 1972.

After the votes were counted on May 6, George Wallace was the clear winner, beating Sanford by more than 100,000 votes. Shirley Chisolm picked up over 60,000 votes, suggesting that African American voters had also turned away from Sanford. This was a crushing defeat for Sanford. Not only did it effectively end his presidential hopes, but it was especially painful that so many people would vote for a protest candidate who had no real hopes of winning the candidacy over a once-popular governor. Sanford returned to his position as President of Duke University, but was eventually elected to national office in 1986, serving in the U.S. Senate until 1993.

Sanford’s defeat in 1972 marked a turning point in North Carolina politics. In the general elections that year, North Carolinians elected conservative television commentator Jesse Helms to the U.S. Senate and James Holshouser to the Governor’s office, the first Republican to serve in the state house since the “fusion” period of the late nineteenth century.