Postcards from the following towns — the first for each one — have recently been added to the North Carolina Postcards digital collection: 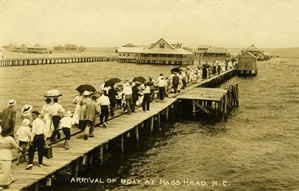 For those of you looking to get more work out of your staff, here’s a suggestion we found in the 1947 Industrial Directory for Burlington & Alamance County.

This afternoon in the stacks I stumbled across an odd little pamphlet entitled “Baths for Health and Pleasure.” It was issued by the Bath Department of Dr. Carroll’s Sanitarium in Asheville, probably in the early 1900s. The foreword to the pamphlet explains that “The potency of intelligent bathing, as a force for health and beauty, is but imperfectly recognized.”

The pamphlet lists the different water-based services available at the sanitarium. Under “Baths for Health” are some unpleasant-sounding treatments including “The Wet Sheet Rub,” “Neptune’s Girdle,” “Alcohol Sponge Bath,” and “The Simultaneous Scotch Douche.” The “Baths for Pleasure” sound a little less frightful, some examples being “The Rub in Tub,” “The Pompeiian Bath,” and “The Plunge.” Sadly, the pamphlet is not illustrated.

Dr. Carroll’s place turns out to have an interesting history. It was founded by Dr. Robert S. Carroll, a psychiatrist, in Asheville in 1904. The name was changed to The Highland Hospital in 1912. That name might sound familiar to regular readers of “This Month in North Carolina History.” The Highland Hospital was where Zelda Fitzgerald died in a fire in 1948. The hospital was given to Duke University in 1949, which operated it until it closed in 1980.

The UNC Libraries have several of Dr. Carroll’s books, including Our Nervous Friends: Illustrating the Mastery of Nervousness, A Psychiatrist’s Quest: Why the Moron, the Genius, and the Rest of Us?, and The Grille Gate, which is described as a “medical novel.” 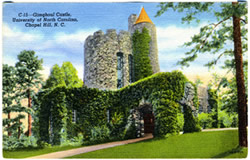 As was mentioned in an earlier post, the North Carolina Collection Gallery was included in the new book North Carolina Curiosities. Sadly, not even the presence of a copy of Napoleon’s death mask was enough to get the Gallery included in Roger Manley’s, Weird Carolinas. Maybe because Manley’s book includes both Carolinas, the competition was just too great.

Despite this snub to our great Gallery, the University here at Chapel Hill did merit inclusion in Weird Carolinas. Like so many other people, Manley was taken by the story of the unsuccessful UNC applicant Peter Dromgoole and the secret society that built its meeting place, Gimghoul Castle on the site of his fatal duel.

Today marks the 250th anniversary of the birth of Marie Jean Paul Joseph Roche Yves Gilbert du Motier Lafayette. The Marquis de Lafayette, French hero of the American Revolution, visited North Carolina on his tour of the United States in 1824. After stops in Halifax and Raleigh, he made his first visit to Fayetteville, the town that was named in his honor at the end of the Revolutionary War in 1783.

Lafayette’s secretary, Auguste Levasseur, kept a journal during the General’s tour, which he later published, giving an interesting outsider’s view of North Carolina in the 1820s. In his general remarks on the state, Levasseur wrote, “In spite of all of its resources of wealth, North Carolina appeared to me the most backward state I had seen as yet. The chief cause, I think, must be attributed to slavery.” However, Levasseur concludes that “notwithstanding those evils which I have mentioned, it cannot be denied, that the inhabitants of North Carolina are worthy to form a part of the great federative family of the United States.”

Read more about Lafayette’s visit to Fayetteville in This Month in North Carolina History. 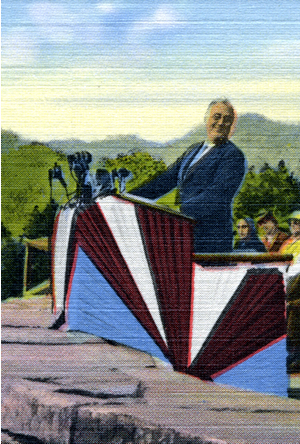 People began arriving as early as seven o’clock in the morning at the parking area at Newfound Gap on the North Carolina-Tennessee border. It was the second of September 1940 and a fine, clear, breezy day at the crest of the Smoky Mountains. By mid-morning there was no space left for parking, and cars were being shunted off onto nearby secondary roads, while their passengers were delivered to the gap in school buses. At five in the afternoon more than 10,000 people had gathered to greet the motorcade from Knoxville bringing President Franklin Delano Roosevelt to the mountain top for the dedication of the Great Smoky Mountains National Park.

President Roosevelt had long been a friend of the park, but pressing national and international concerns influenced his speech. Taking as his theme the spirit of the pioneers who had settled the mountains, he called on Americans to show that same spirit in the face of threats from Europe and Asia and sought to rally support for his plans to strengthen national defense. Newspapers reported that he received an enthusiastic response from the crowd and was strongly supported by Governor Clyde Hoey of North Carolina who spoke briefly, as did Governor Prentice Cooper of Tennessee and Secretary of the Interior Harold Ickes. Roosevelt did not neglect the park altogether, however. He spoke of the many varieties of plant and animal life that would be preserved for the future : “… trees here that stood before our forefathers ever came to this continent…” and “brooks that still run as clear as on the day the first pioneer cupped his hand and drank from them.” The park, he believed, would show Americans their past because “the old frontier … lives and will live in these untamed mountains to give the future generations a sense of the land from which their forefathers hewed their homes.”

North Carolinians had been involved in agitating for some sort of national park in the southern Appalachian Mountains since 1899 when the Asheville Board of Trade had been instrumental in organizing the Appalachian National Park Association. For a while interest shifted to the creation of a national forest, and the Weeks Law, passed by Congress in 1911, did authorize creation of forest reserves somewhere in the White Mountains of New Hampshire and the southern Appalachians. A shift of emphasis from national forest back to a national park followed the creation of the U. S. Park Service in 1916 and the National Park Association in 1919. The impact of the automobile and the potential of tourism also increased enthusiasm for a park. In 1924 the U. S. Department of the Interior released a report favorable to forming a park in the Smoky Mountains on the border of North Carolina and Tennessee, and in that same year the General Assembly of North Carolina appointed a special commission to promote North Carolina’s effort to secure the park. The commission faced a difficult challenge because the U. S. government would only create the park if the states could provide the land. National parks in the west had been carved out of federal land, but all the land for a park in the Smoky Mountains would have to be bought from private owners. The North Carolina park commission sought to raise money from private gifts and public funds. In 1927 the state of North Carolina provided two million dollars to purchase land, and when this amount plus private gifts would not meet the need, John D. Rockefeller gave another five million dollars from the Laura Spelman Rockefeller Memorial Fund. In 1930 the governors of North Carolina and Tennessee gave deeds to nearly 159,000 acres in the Smoky Mountains to the United States, and the land was given limited park status. During the 1930s several more purchases rounded out the park, and it received full park designation in 1940.

In the years following its opening the Great Smoky Mountains National Park has proved to be one of the most popular parks in the country. The park is 95% forested of which 25% is old growth, comprising more than 100 species of trees. It is home to 50 species of fish, 39 species of reptiles, 43 species of amphibians, and 66 species of mammals, including its famous black bears. More than 1500 species of flowering plants grow in the park, which was named an International Biosphere Reserve in 1976. It is known for its miles of hiking trails and fishing streams. In Cades Code visitors find historic nineteenth and twentieth century homes, mills and other buildings which illustrate life in the remote areas of the Appalachian mountains.