A 1933 hurricane pushed the G. A. Kohler, a four-masted schooner from Baltimore, ashore just north of Cape Hatteras. The wreck remained on the coast until World War II, when the wooden ship was burned in an effort to recover scrap iron from her hull. The image of the intact ship was made sometime between the wreck and 1945.
<img src='https://blogs.lib.unc.edu/ncm/wp-content/uploads/sites/6/2007/11/kohler_together.jpg' alt='kohler_together.jpg' align="center" vspace="8" hspace="14"
The color image, which comes from a postcard in the Durwood Barbour Collection, is not dated but is thought to have been created in the 1950s or 1960s. 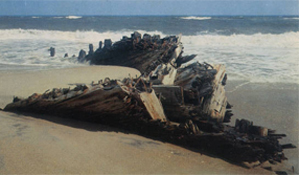