Many people remember Bones McKinney as the coach of the Wake Forest men’s basketball team, a post he held from 1958 to 1965. That’s no small claim to fame, but Bones may be part of a more select club–a person with ties to all the “Big Four” Tobacco Road basketball programs. Here’s the story: Bones grew up within sight of Duke’s east campus. His Durham High School basketball team played some of its home games on the Duke campus (first at Card Gymansium, then later in the newly-opened Cameron Indoor Stadium). Four of Bones’s teammates (Gordon Carver, Bob Gantt, Cedric Loftis, and Garland Loftis) later started at Duke. McKinney chose not to go with his Durham High pals to Duke, but instead went to North Carolina State where he played for two seasons. World War II interrupted Bones’s college career. When he came back he spurned the Red Terrors (as NC State was then known) for UNC. He enrolled at UNC in January 1946 and played on the team that went to the Final Four that year. After that season, McKinney left college ball for the NBA. 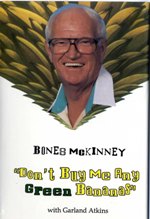 The North Carolina Collection got an early Christmas present this year when two friends of the collection, Snow and Ben Roberts, brought us a copy of Don’t Buy Me Any Green Bananas. I have been looking for this book for at least a decade. As a coach at Wake Forest (1958-1965) and with the ABA Carolina Cougars (1969-1971), McKinney was known for his colorful personality and showmanship. He channels that same zaniness in this collection of his newspaper columns as he expounds on such topics as traveling with family, personal ads by senior citizens, and ticket distribution for NCAA tournament games. 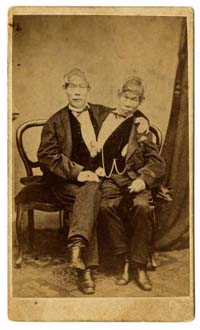 The two men who were arguably the most famous residents of North Carolina in the nineteenth century are featured in a new online collection: Chang and Eng Bunker: The Siamese Twins. This website presents original materials from the North Carolina Collection and the Southern Historical Collection and documents the lives and times of conjoined twins Eng and Chang Bunker.

Highlights from the collection include photographs of the twins and their families, letters written by Chang and Eng, and a fascinating account book documenting their travels through the United States and Europe in the 1830s.

In many early maps of the American colonies, we can recognize North Carolina by the familiar shape of the Outer Banks on the coast, and by the borders with South Carolina and Virginia, which were first established in the 1600s and were pretty close to today’s state lines. The western border, on the other hand, was much more flexible. Some maps show no formal western border at all, with the colony ending in a roughly-mapped area labeled as the home of the Cherokee Indians. Many other maps show North Carolina stretching as far as the Mississippi River, incorporating all of present-day Tennessee. The western border of the state was for a long time a matter of conflict and debate, and was not finally set until December 1789.

Exploration and settlement in the “backcountry,” the rugged mountain areas that would become present-day Tennessee and Kentucky, began in earnest in the late eighteenth century, led by pioneers including the famous frontiersman Daniel Boone. Many families from North Carolina and other eastern colonies left for the west in search of better land. As the population grew, so did the desire for self-governance. The western areas between the Appalachian Mountains and the Mississippi River were a long way from the established seats of government in the east, and the needs and desires of the people in the new settlements often differed from those of the original colonies, whose populations were still congregated primarily along the Atlantic coast.

In recognition of the growing western population and the need for established government in the new settlements, the North Carolina legislature authorized the creation of six new counties in the region between 1779 and 1784. In 1784, residents in the new counties, led by John Sevier, organized a new state to be named after Benjamin Franklin. The State of Franklin had a complicated five-year history. The Franklin government had poorly-defined relationships with both the North Carolina legislature and the Continental Congress, and the new state was never formally admitted to the union. Regular battles and land disputes between the residents of Franklin and the Cherokee Indians made the matter even more difficult.

The Franklin legislature met for the last time in 1788, and the western lands were folded back into the jurisdiction of North Carolina the following year. On December 22, 1789, North Carolina formally ceded the six western counties to the Continental Congress, leading to the eventual establishment of the new state of Tennessee, which was admitted to the union in 1796.

Image Source:
Detail from “North America with the Boundaries of the Thirteen United States.” Published in England, ca. 1783.