Tonight, at 9 p.m., UNC Television will premiere the 90-minute documentary Senator No: Jesse Helms. The film offers an in-depth look at the life and public career of one of North Carolina’s most significant political leaders in the second half of the twentieth century.

Some historians and political analysts go even further in their evaluation of Helms. He was, they claim, the most influential and effective leader of the New Right movement that transformed the national political scene and culminated in the election of Ronald Reagan as president in 1980. First as a Raleigh-based television editorialist and then as a United States senator, Helms combined criticism of the civil rights movement and warnings about the threat of communism with sharply stated conservative positions on controversial social issues, such as abortion and gay rights. His political action committee became the largest in the nation, pioneering in the use of direct mail and in hard-hitting, negative television ads that energized his supporters and outraged his opponents.

Few people were neutral about Helms. In 2002, near the end of his 30 years in the U.S. Senate, The Almanac of American Politics asserted that “No American politician is more controversial, beloved in some quarters and hated in others, than Jesse Helms.”

A recent gift to the North Carolina Collection provides a unique, if unscientific way, to gauge the prominence of Helms in state and national politics. In December 2007, Lew Powell of Charlotte donated 2,698 North Carolina-related pin-back buttons, badges, ribbons, cloth swatches, promotional cards, and stickers. Among the most extensive subsets of items in The Lew Powell Memorabilia, as the gift will be known, is the collection of pin-back political campaign buttons.

Over several decades of collecting, Powell gathered hundred of buttons distributed during Tar Heel campaigns for offices ranging from mayor to county commissioner to Council of State to governor to congressman to senator to president. But Helms is the clear winner as the politician who generated the greatest variety of buttons. Helms for Senate. Helms for re-election to Senate. Helms for Vice-President. Helms for President. And lots of anti-Helms buttons, too. In all, there are forty-nine Helms-related buttons in the Powell collection—fascinating, if unusual, documentation of the long and important place of North Carolina’s Senator No in twentieth-century American politics.

Here’s a sampling of Helms-related buttons: 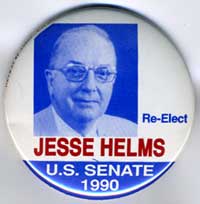 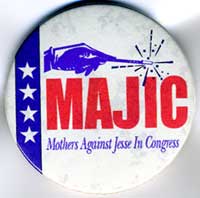 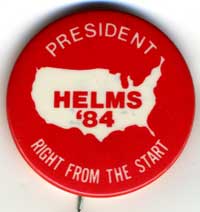 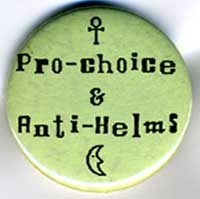 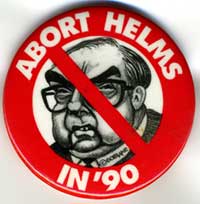 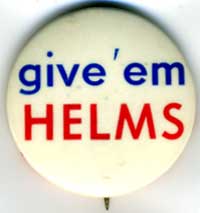 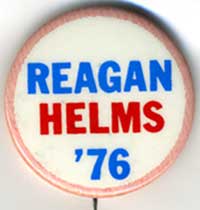 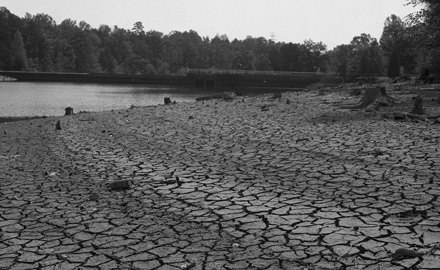 This isn’t a recent picture of Falls Lake using a black and white setting; this is what the Burlington City Lake/Reservoir looked like in September of 1953. North Carolina was suffering from a multiple year drought that lasted until the extremely active hurricane seasons of 1954 and 1955 provided some relief. 1953 was a year that saw minimal amounts of rainfall and set a record for the longest consecutive 90+ degree days in a row, a record that stood until this past summer. Let me introduce myself and explain how I came across these images. My name is Patrick Cullom and I was hired last year as a Visual Materials Archivist in the North Carolina Collection Photographic Archives. The first collection with which I have been working is a series of approximately 100,000 images taken by Mr. Edward J. McCauley, a photographer for the Burlington Times-News (Burlington, North Carolina), from 1949-1974.

These are the front pages from the September 1-3, 1953 editions of the Burlington Times-News (McCauley took all images used, note image from above). 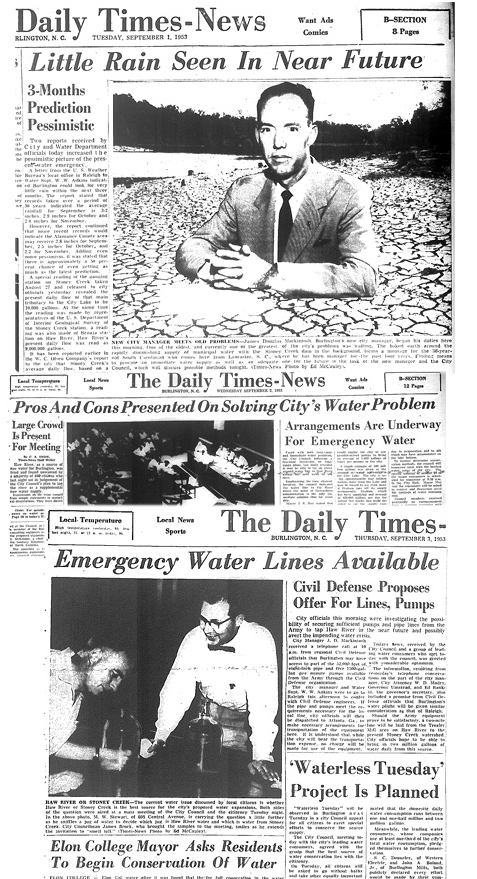 As I processed images taken in 1950-1953, I noticed that there were multiple images depicting low levels in reservoirs, public conservation campaigns, and construction of water treatment facilities. Since the images with which I work contain almost no descriptive data, except for a year, the Times-News microfilm has been of great assistance as a reference tool as I continue to work with this collection. As I skimmed the Times-News from 1950-1953, I couldn’t help noticing that many of the articles related to the drought document some of the same strains (growth of business and population) and proposed solutions (conservation, importing water, expansion/development of new water sources) being discussed today as the state deals with another exceptional drought.

This is an image documenting one of Burlington’s public campaigns from 1951, early in the 1950’s drought. 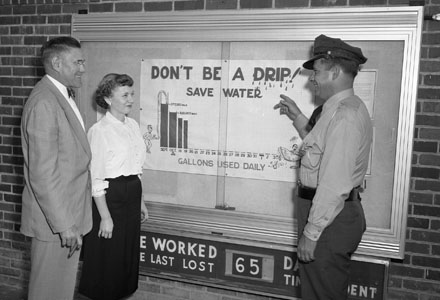 One of the greatest mysteries I’ve encountered here in the North Carolina Collection has revolved around this postcard of “Charlotte Speedway:” 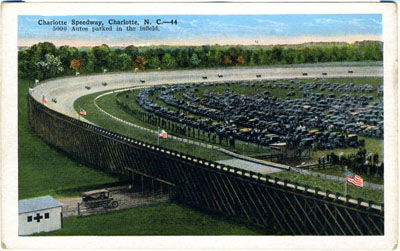 Curious about this predecessor to today’s Lowes Motor Speedway, I sleuthed around a bit to learn more about the track. What I found was perplexing: most sources described Charlotte Speedway as a dirt track built near the old airport in 1949, where stock car races were held. And yet, pictured here was an indy race on a wooden track, and the card appeared to be much older than 1949. I kept searching for traces of the speedway, to no avail. It seemed that maybe this indy track had been utterly forgotten here in stock car country.

Months have passed since my initial investigation, but today while browsing the index to “The State” magazine, I spotted this listing: “First Speedway Race Track.” Though I expected this lead would end up yet another reference the 1949 stock car track, I had to give it a shot. When I opened that November 1979 issue, I saw it: an image of a wooden track identical to the one pictured in the postcard.

Sure enough, there was another Charlotte Speedway built in Pineville in 1924, where indy races were held. According to the brief article by Bugs Barringer, the track was made of green pine two by fours, so that the wood would cure and shrink, allowing ventilation between the boards and preventing the tires from burning during races. Apparently a few stock car races were held at the track but, ironically, they attracted too few spectators to be profitable.

The North Carolina Collection recently received as a gift the sewing model book created by Helen Bales when she was student at the Home Industrial School in Asheville in 1898-1899. Helen was studying to be a teacher at a time when it was expected that common schools would teach young girls how to sew.

Miss Bales had to demonstrate that she could teach over a dozen types of stitching. Her samples are presented one to a page. On the facing page is a handwritten explanation of the materials employed and the likely uses of the stitching style. Some pages also include verses to read to the children as they stitch. Here is one such verse imposed on the model for an apron: 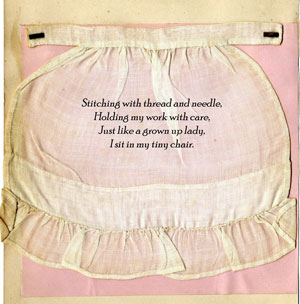 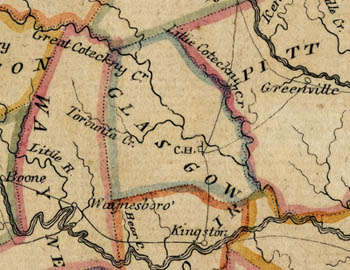 When I first spotted Glasgow County in eastern North Carolina on an old map, I thought it must be a mistake. I checked David Corbitt’s The Formation of the North Carolina Counties and it turns out that the map was correct — but not for very long. Glasgow County had a very short existence, lasting just eight years. It was formed in 1791 from Dobbs County and named for the current Secretary of State, James Glasgow. However, after Glasgow was implicated in a complicated land fraud inquiry in the late 1790s, the state legislature looked for a more appropriate namesake for the new county, settling finally (and permanently, this time) on Revolutionary War hero Nathanael Greene, for whom the county was named in 1799.

Our Tobacco Road neighbors, Duke and NCSU, are ranked fifth (at $22.6 million) and thirteenth (at $13.6 million), respectively. With the ACC basketball season just under way, we’ll see if these values translate into tick marks in the win column. 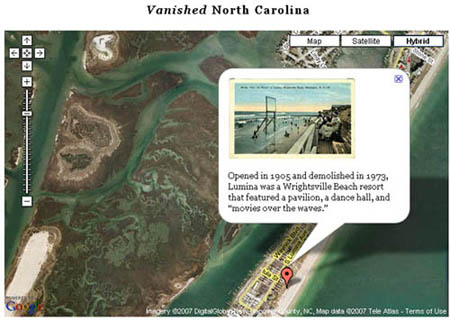 Our 51st edition of “This Month in North Carolina History” examines a January 1961 airborne alert mission gone awry. Read about it at “Bombs Over Goldsboro.” 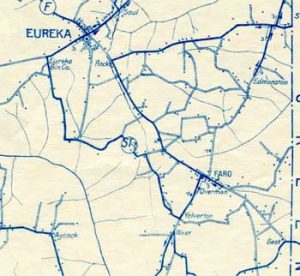