With the economy struggling and the price of gold on the rise, there’s no better time to go out and do a little prospecting. But why bother to trek all the way out to California or Alaska when you might strike the jackpot in your very own backyard? As a service to our readers, North Carolina Miscellany is pleased to publish online the “Preliminary Map Showing Location of Principal Gold Deposits in North Carolina.” Published in 1896, the map might be just a little outdated, but you never know what you’ll find. If you do happen to stumble across anything on par with what the Reed family of Cabarrus County dug up on their property, a modest gift to the North Carolina Collection would be an appropriate way of showing your thanks. 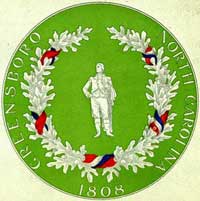 Greensboro turns 200 years old this year. To recognize the occasion, the city has planned an official celebration, which started on March 25 and will run until May 17, 2008. The image to the left is from the cover of the Official Program of the One Hundredth Anniversary Celebration, which was held October 11-17, 1908. In the same publication is the image below of South Elm Street, ca. 1908. I haven’t been to downtown Greensboro in some time; how different does it look now? 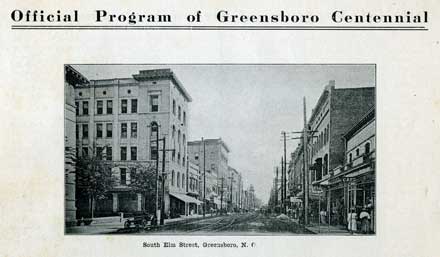