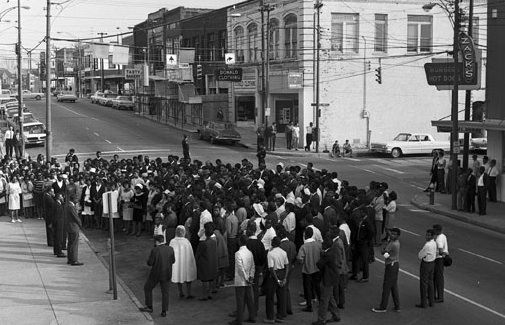 April 4, 2008 marks the fortieth anniversary of the assassination of the Civil Rights leader Dr. Martin Luther King Jr. in Memphis, Tennessee. These images were taken in Burlington, North Carolina at a tribute to Dr. King’s life held just days after Dr. King was killed. They come from the Edward J. McCauley (b.1926–d.2003) Photographic Collection, in the North Carolina Collection Photographic Archives. McCauley was a photographer at the Burlington Times–News (newspaper) from 1949 to 1974. The image at the top of this entry appeared in the April 8, 1968 edition of the Times–News accompanying a story about the tribute/march held on April 7, 1968.

According to the article, over 300 people participated in the mile long march from First Baptist Church (on Apple Street) to City Hall, which was led by First Baptist’s Pastor, Dr. Harold J. Cobb. When he spoke to the group assembled at City Hall after the march, he began by saying “This is not a march on City Hall but a march to City Hall to awaken both colored and white and to say there will be no disorder here.” He went on to praise King’s message of equality and non–violence; closing his remarks by stating “We will and shall overcome.”

The Burlington Police monitored the march and blocked traffic to accommodate the large number of people involved. Due to the violence and rioting that erupted in many cities across the country as a result of Dr. King’s assassination, the Burlington Police prepared for the worst, and were relieved by the “orderly and reverent” manner of those involved in the tribute. 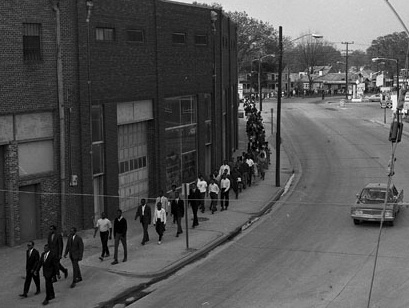 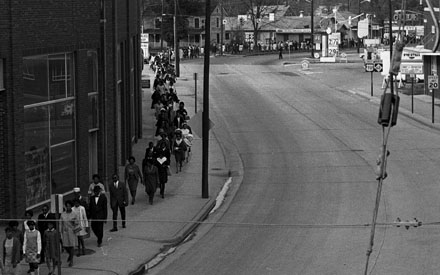