Sunday’s News & Observer offered an article discussing the recent opening of the Bostic Lincoln Center Museum. What is the Bostic Lincoln Center, you ask? A Rutherford County group whose mission is “to preserve, study, prepare and make visitor-friendly the traditional birthplace of Abraham Lincoln,” which, by the way, is in Bostic, North Carolina.

Ok, most people would agree that the traditional birthplace was actually in Kentucky, but the Bostic Lincoln Center claims evidence to the contrary. For instance, records of Bostic’s Concord Baptist Church showed that Lincoln’s mother, Nancy Hanks, was listed as a member at the time of his birth, suggesting that little Abe was born out of wedlock. With a little searching, I found a number of books here in the North Carolina Collection that support Lincoln’s Carolina roots, such as James H. Cathey’s 1899 work, The Genesis of Lincoln, pictured below. 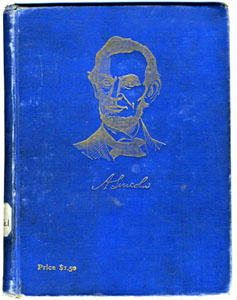 Each of these sources disagrees on one detail: who’s the father? Among the seven sires of Abraham Lincoln, as listed by William Barton, are Abraham Enloe, Andrew Marshall, and John C. Calhoun. Even Napoleon Bonaparte has been accused, fictionally speaking. Perhaps playing on this Western North Carolina lore, the accusation was made by a character in Thomas Wolfe’s short story “Gentlemen of the Press.”

To settle the matter, the Bostic Lincoln Center is calling for a DNA test. Will they ever find Honest Abe’s illegitimate father? Stay tuned.